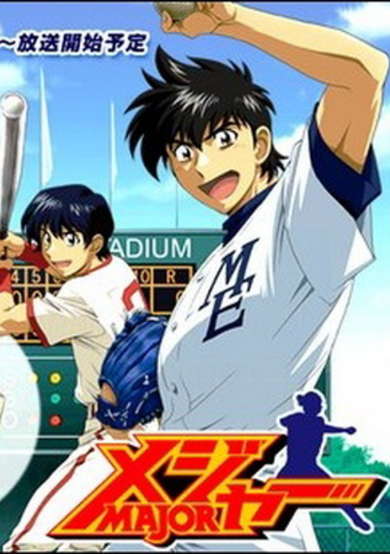 This series picks up a few years after season one. Gorou is now older, and has come back to his original home town. As if nothing changed, he starts off right where he left with his old friends and tries to fit back in. Join him as his embarks on setting out to join up with the elite baseball school, Kaido.
User Count4588
Favorites Count28
Start Date10th Dec 2005
Next ReleaseInvalid date
Popularity Rank2161
Rating Rank761
Age RatingPG
Age Rating GuideTeens 13 or older
SubtypeTV
Statusfinished

There is One Dream!

The End of the Battle

After moving away Goro returns and faces well...the same challenges he did last season. Focusing more on basebal, the teams, and individuals that play it, Major S2 has more of the typical sports anime feel while retaining and updating characters that fans of S1 have come to like. Story Major S2 starts off with a short update on the life of Goro since the end of season 1. The Major: Yuujou no Ikkyuu movie covers this part of Goro's life. However, do not be dismayed if you did not watch the movie before trying to watch this season. The short update is enough to catch you up and explain Goro's circumstances. That said after Goro comes back to town he finds much of what he did when he started playing little league baseball. A baseball team on the verge of collapse, a bully standing in his way, and timid teammates. The rest of the first half plays out the same as you might expect from a shounen sports anime. This season's story just feels more of the same until the midpoint when the story picks up, and Goro goes off to challenge a prestigious baseball high school. Animation/Sound Much like season 1, there is not much to gawk at here. It serves the purpose of the story and does a decent job of it. A new animation and sound is added to Goro's pitches after he upgrades his fastball. Characters All supporting cast members return in some form or another with an addition of a myriad of others. It was nice to see the Goro's family life and the issues that arise from his father's declining career even though the story only made up a few episodes. Sato Toshiya, Goro's childhood baseball buddy and rival, gets a major update. While the introduction to his circumstances was rather weak, the ensuing story delving into his motivation and goals made him a good foil for Goro. Overall If you liked season 1's second half or if you've developed any attachment to Goro, I highly recommend you watch this series. While it does not break any boundaries or tell as compelling a story as season 1's first half, the baseball action and challenger spirit that Goro and friends bring is enough to warrant a viewing. It also serves the purpose for much of the drama of season 3.

Start a new discussion for Major S2 anime. Please be fair to others, for the full rules do refer to the Discussion Rules page.