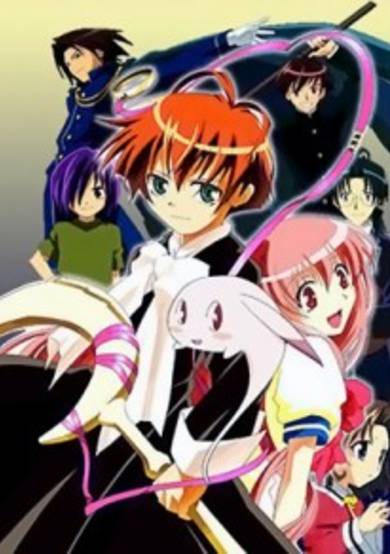 Loki, the Norse god of mischief, has been exiled to the human world for what was apparently a bad joke. Along with being exiled, he's forced to take the form of a child. He's told the only way he can get back to the world of the gods is if he can collect auras of evil that take over human hearts, and so to do this he runs a detective agency. Loki is soon joined by a human girl named Mayura who is a maniac for mysteries, and she soon helps out in her own way. However, soon other Norse gods begin to appear, and most have the intent to assassinate Loki for reasons unclear. (Source: ANN)
User Count2618
Favorites Count14
Start Date5th Apr 2003
Next ReleaseInvalid date
Popularity Rank3051
Rating Rank3526
Age RatingPG
Age Rating GuideTeens 13 or older
SubtypeTV
Statusfinished

Mayura Daidouji, is a girl is who is love with aliens and supernatural things. Once day in a clock tower, she finds a haunted and abandoned doll who talks and wants her to play with her. She agrees and brings her back home. Soon a black cat takes away the doll, and she comes upon the Enjyaku Detective Agency. She walks into the agency and meets the handsome man Yamino who she thought was the detective, but the real detective was a small boy named Loki. She asks him to find a doll, but sent her out. Although she was sent out he went looking for the doll anyways, and meets her at the tower. They then fight the haunted doll and revives the truth that she was not abandoned. Back at the agency she declares herself the new helper of the business

The Friend of Justice is Dirt Poor

During a festival held in Mayura's school, Loki came to visit Mayura and Yamino who came to help her in order to recruit members for her club. Due to lack of members in her club, Loki was unfortunately dragged along to follow her on the 7 Mysteries of the school tour. Proving that 6 out of 7 are not mysteries, Mayura brought Loki to see The Wandering Armour at her school entrance which proved to be real. Eventually, Loki defeated the armour with the help of a transfer student, Narugami who at the end is revealed that he is Thor, God of Thunder who's currently living in poverty and taking up part-time jobs.

The Enjaku Detective Agency now is against a mysterious case with angry birds attacking people in the zoo. Mayura decides to plan everything and takes everyone to the zoo, including the zookeeper for the birds. She forgets about her mission and looks at all of the animals while Loki and Yamino rests. She then bumps into Narugami who is working in an anteater costume. Then they all leave for the bird cage, leaving Narugami behind. A mysterious bird comes swooping down and hypnotizes Mayura. Later Loki figures out that a Nordic god named Heimdall sets up the trap and hypnotized the zookeeper as well to get Mayura to lure Loki in. After solving the case, they return to the agency and Heimdall kisses Mayura and the episode ends

Papa was a Great Detective

Mayura's father thinks that all of the mystery junk she always talked about is useless and is bad for her. He wants her to stop going on detective adventures. To help her solve her problems between Mayura and her dad, Loki used his powers to bring them both back to their memories of 10 years ago. As their memories revealed that her dad told her that he was a "detective" when she was younger, Mayura remembered it was because of him that she loved mysteries which led to an understand at the end.

A new god appears, Frey (Freyr), as a thief. He steals many things and Loki has no interest in the robberies until he discovers that Frey is also going to steal the Briggsamen necklace. Frey challenges Loki to stop him. Loki goes to meet him when Frey steals the necklace, but is unable to stop him. We learn that Freya is his sister, and that she may be on Earth.

A mysterious young girl named Reya shows up on Loki's doorstep asking for help. She claims that, at night, the furniture has been moving on its own and she's been hearing footsteps. However, upon speaking to the head butler, we learn that no such happenings have occurred. Is this girl's story fabricated? Meanwhile, Heimdall is lurking in the shadows, and that's never a good sign...

Loki and Thor rush off to find Freya, on their way they reunite with Yamino and an unconscious Mayura, who fell while trying to catch up with them. They gang find themselves in an aquarium and Loki sees sea otters for the first time. They later find a fearful Freya, but Loki senses darkness in her...

Loki is abducted by two bank robbers on the street who kidnap him after he discovers their true identities. Thanks to an earlier conversation between Mayura and Yamino, Loki decides to let them come and rescue him, rather than getting himself out of the situation on his own. He leaves them several clues and Mayura and Yamino hurry to find him before something bad happens. There is also a reference to Yamino's true nature--as Loki's Son!

Mayura's Way to Certain Victory in the Ceremonial Vest

If Mayura doesn't find a way to get a passing grade in her class, she'll end up having to stay after school to study which means: no more mysteries! While she and Narugami crack open the books, a wishing tree is growing from a gem dropped by Frey. Suddenly, Mayura gets an idea that will help her pass the tests; get one of the leaves from the wishing tree! But is it really that simple?

Loki, Yamino, and Mayura find an excellent coffee house that has mysteriously become vacant. The group makes an effort to make it popular again, but just when they do, strange things start happening again. What could be behind it?

Start a new discussion for Matantei Loki Ragnarok anime. Please be fair to others, for the full rules do refer to the Discussion Rules page.