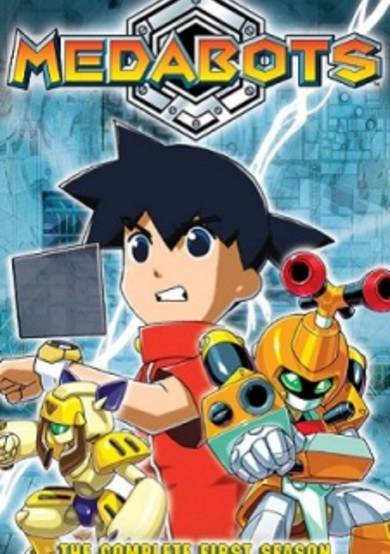 In the 22nd century, Medarots—intelligent robots powered by medals that act as their minds—are commonplace all over the world. They serve their human partners and settle disputes through a combat sporting event known as Robattling. Combatants that take part in robattling for the sake of improving their ranking are known as Meda-fighters, and they aim to climb the ranks to enter the World Tournament and represent their country.Medarot tells the story of ten-year-old Ikki Tenryou stumbling across a rare Beetle medal and gaining his first Medarot, dubbed Metabee. He’s expecting a submissive and loyal robot that would follow his every command, but Metabee does what he wants and doesn’t take kindly to being insulted. Now Ikki is stuck with him, and they must work together to give their competition a Metabee-boppin’ as they robattle their way to the top!

In the year 2122 it seems that everybody has their own Medabot - everyone except Ikki Tenryou that is. Unable to afford a new model, Ikki is reluctant to buy the old model on sale in the local store. But when a gang of Rockers starts to terrorize his classmates, Ikki is forced to step in and fight with a damaged medal and an old model. Can this rookie team save the day or will they be all washed up before they begin?

Return of the Screws

Thanks to Erika's report of their victory over the Rockers, Ikki and Metabee become famous. As other Medafighters challenge them to battle, the pair must take on Peppercat and Samantha, leader of The Screws. But how can they defeat their opponent when they are fighting with each other?

After finding Ikki and The Screws with their Medabots, the school gym coach makes them all run laps as punishment. Wondering why the coach hates Medabots so much, Ikki and the others spy on him and discover that he has a Medabot of his own.

Ikki and Erika meet Kouji and Karin, two posh kids from the nearby private school. When rumors spread that a Legendary Medafighter is at the school, the pair decide to sneak in. Could there be any link between their new friends and the mysterious adversary or is it all a coincidence?

The Old Man and the Sea Monster

Ikki and Metabee learn an important lesson about surroundings when they are defeated at the beach by a group of bullies. Can the old sea master of the beach help them reclaim Metabee's legs or is Sharkkan too powerful on the aquatic battlefield?

When nobody believes that a UFO landed on her front yard, Erika tries to bring out the truth. Meanwhile the Rubber Robo Gang decide to make money selling alien merchandise. (Source: TV.com) Note: Episode 8 in the Nelvana English dubbed version.

Hearing reports of ghosts stealing people's medals in the forest, Ikki and Erika decide to investigate. There they find Karin and Kouji, who are also out looking for the Gimme Ghost. But is the ghost real, and what does the Rubber Robo Gang have to do with things? (Source: TV.com) Note: Episode 6 in the Nelvana English dubbed version.

Ikki and Erika decide to do a report on Medabots and Medafighters for school. Metabee finds a Mermaid Medal while strolling. They put the medal into Brass and they find out that the medal was lost when her Medafighter had to move somewhere else and forgot her medal. Metabee insists on reuniting Oceana and her Medafighter Hannah. When they find her, they find out that Oceana's body was lost during the move too. Erika, being the great investigator that she is, locates the guy who found Oceana's body, but he refuses to give it back. Now Metabee has to Ro-Battle Kuraba, a Crab type Medabot, to win her body back. (Source: TV.com) Note: Episode 32 in the Nelvana English dubbed version.

Spyke and Cyandog never seem to win a Robattle so Samantha kicks him them out of the Screws gang. Spyke and Cyandog ask Metabee and Ikki for training help and they find out that Cyandog is terrible at battle because he has the wrong type of medal. (Source: TV.com) Note: Episode 7 in the Nelvana English dubbed version.

For Better for Worse - Part 1

Ikki and Metabee decide to enter the 10th Annual Medabot Citywide Robattle Tournament, but with the two still fighting each other can they hope to defeat their opponents? Team or no team, the pair will have to fight harder than ever before if they hope to beat the power team of Kouji and Sumilidon. (Source: TV.com) Note: Episode 8 in the Nelvana English dubbed version.

What I enjoyed most about Medabots was the characters and the way they interacted. We get our usual hopelessly average protagonist, his seemingly defective partner Medabot who initially wont obey any of Ikki's commands, his best friends being a tomboy who reports for the school newspaper and a suspiciously familiar convenience store clerk. The story isn't anything to write home about, but the humour and wackiness along the way will possibly keep you engaged. Characters I enjoyed were Mr. Referee, a strange old man who appears anywhere and everywhere a robattle takes place, The Phantom Renegade, a bungling "master thief" of dubious notoriety, and the Rubberobo gang, this worlds rough equivalent of Team Rocket sans the glorious motto. They do, however, have ridiculous rubber suits and antennae and some hare-brained schemes for stealing people's medabots among other things that would impress Team Rocket for their outlandishness and excessive execution. The story does get rather intense towards the end, and the action overall was quite decent. This anime isn't exactly the best thing going, but I found it rather enjoyable, and I think people who aren't looking for something too intense or long winded will find this anime quite fun to watch too. This almost combines elements of the Mecha genre with elements from various 'mon series that were all the rage around the time it was released, so if you enjoyed Pokémon and Digimon growing up, perhaps this will be to your liking. In my country this aired back to back with Dragon Ball Z, and comparatively was refreshingly paced with satisfying battles and genuinely entertaining moments in almost every episode. Ill say again that this isn't the greatest anime going, yet there are anime that were better that I didn't enjoy as much. Overall, in the context of similar anime I feel 7/10 is a fair rating for Medabots. Worth mentioning, the ending is one big WTF moment that still confuses me, and was never explained or elaborated upon even in the less enjoyable second season of Medabots. \*Note: I watched the dub version

Start a new discussion for Medabots anime. Please be fair to others, for the full rules do refer to the Discussion Rules page.