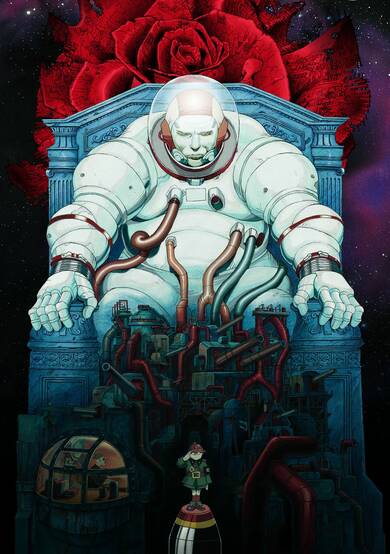 From Katsuhiro Otomo, acclaimed creator of Akira, comes an animated masterpiece: three short stories all put together as a series of Memories. Part one is titled Magnetic Rose, a science fiction tale that tells a chilling story of love, loss, and the unwillingness to forget. Part two is titled Stink Bomb, a tongue-in-cheek story of a chemical researcher who is just looking for a way to get rid of his cold... so why is everybody around him dying? Part three is titled Cannon Fodder and is an introspective tale about modern wars and simply following orders. Music conducted by Yoko Kanno, Jun Miyake, Hiroyuki Nagashima, and Takkyu Ishino. (Source: AniDB)
User Count7638
Favorites Count90
Start Date23rd Dec 1995
Next ReleaseInvalid date
Popularity Rank1496
Rating Rank1435
Age RatingPG
Age Rating GuideTeens 13 or older
Subtypemovie
Statusfinished

This anime is seperated in three parts. Three short movies. The first part is a kind of futuristic ghost story, the second part is about a complete idiot beeing a toxic weapon and the last part is a criticism against war. In my opinion the first part is also the best part. The story, the sound and the whole atmosphere are awesome. The ending is not very predictable and well staged. The second part is about an idiot and the the aftereffects of his stupidity. This part has a cruel humor. Very grotesque, but still funny. The ending was very unpredictable for me but well fitting into the story. By the way the sound of this part was nice, too. The last part is very diffrent by animation and story compared to the other two parts. It is about a family living in sort of "dritte Reich". We see one day of the familys life who are living in war against another country. These three short movies are made for mature and are high standart.

I really dug the first two shorts, which featured pretty damn well-done stories that wouldn't have felt out of place in The Twilight Zone, but the third one was so offensively terrible to me that it knocked this down by a good .5, and by itself was probably a 1.5 out of 5. Not that it wasn't well-directed, but there was no real narrative to follow and it felt horrifically boring, to the point that I spent the entire short asking myself questions like "what is the point of this" and "why won't it end". I mean, it has a good commentary going on, but it's just not very well presented at all, and I also hate the art style. Still, besides that third one, this was pretty great and I'd highly recommend it. Just avoid the third short unless you really have to see it for completionist purposes.

Start a new discussion for Memories anime. Please be fair to others, for the full rules do refer to the Discussion Rules page.