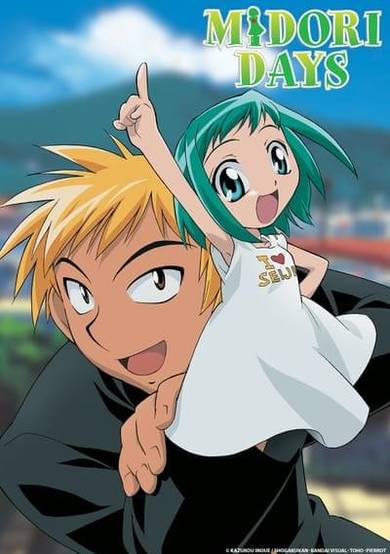 There isn't a single person in Sakuradamon High who hasn't heard the legends about Seiji "The Mad Dog" Sawamura's demonically powerful right hand. His reputation makes it fairly difficult for him to approach girls, and after being rejected 20 times straight, he half-jokingly vows to finish high school with his right hand for a girlfriend. Much to his surprise, after waking up the next morning, Seiji discovers that his demon right hand has mysteriously turned into a miniature girl, Midori Kasugano, who reveals that she has had a crush on Seiji for the past three years. Because their situation is not ideal for either of them, Seiji attempts to return Midori to normal. But after causing a big misunderstanding at the Kasugano household, the pair decide to keep their predicament between them until a solution is found. Thus begins an odd relationship, and what could be the only chance for Midori to finally be with the one she loves. [Written by MAL Rewrite]
User Count10340
Favorites Count47
Start Date4th Apr 2004
Next ReleaseInvalid date
Popularity Rank1140
Rating Rank3243
Age RatingR
Age Rating GuideMild Nudity
SubtypeTV
Statusfinished

All Midori no Hibi released episodes 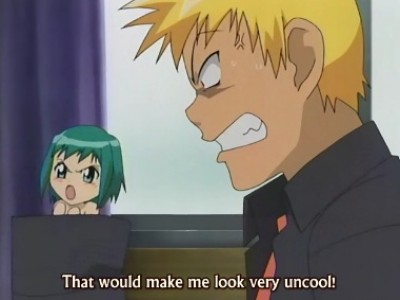 The lonely and frustrated Seiji Sawamura ["Mad Dog Sawamura"] wakes up one morning and finds his right hand has turned into a girl named Midori. Midori, who has been deeply in love with him for three years, and who has been watching him from afar, is not as upset with the current situation. Now Seiji must find a way to deal with his new life with Midori. But right now, Sawamura is more interested in two female admirers who would like to come over and meet him...but after being rejected 20 times in a row, Sawamura cannot believe his good luck... 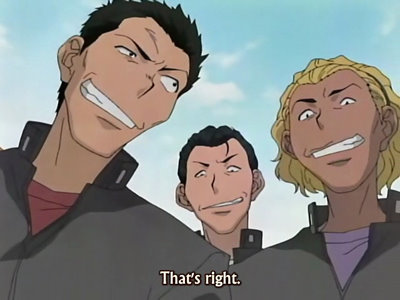 Just as Seiji is learning to deal with the fact that his right hand is now Midori, a group of thugs from a nearby high school begin to start trouble as to force Seiji to fight. Can Seiji really fight without his "Demon Right Hand?" The Day of Discoveries

Seiji's older and very cruel sister comes home for a 'visit,' after she takes all the money Seiji recieved from his parents, her and the members of her former motorcycle gang decide to take Seiji along to a bathhouse. Will she discover Seiji's secret? 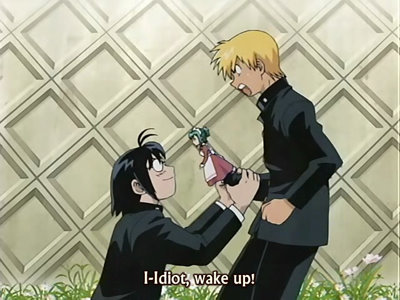 Discovery of the Secret!?

After an accident, Seiji and Midori relize she needs some new clothes. So after some thought, they go to a doll shop. After Takamizawa Shuichi, a fellow student discovers that Seiji collects dolls, Seiji pretends to be his friend and have the same hobby to keep his mouth shut. But how long before Takamizawa discovers thier secret? 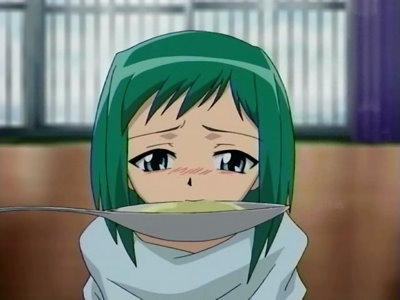 The Power of Love

The school physical education instructor has a grudge against Seiji and plains to take it out on him in gym class. Seiji has another problem after he mistakenly takes some of Orin's [his sister's] booze thinking it was medicine, to fight his cold, but soon passes out. How will Midori handle an afternoon with no Seiji? And who keeps ringing the doorbell? 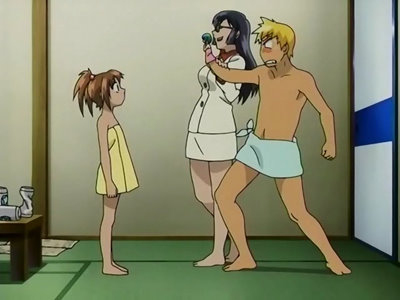 Seiji's neighbor Shiori decides she doesn't want to go out with her father and stepmother for the day, because she hates her stepmother. So Seiji ends up watching her instead. Ayase, still trying to get the courage to ask Seiji out, sees them walking together and soon believes Seiji is a pervert. How true are her fears? Is Seiji really a pervert? 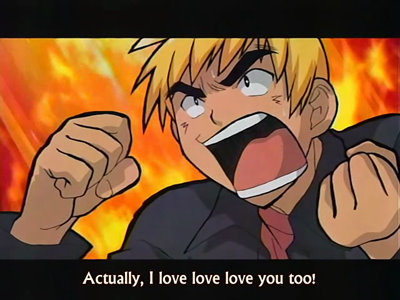 After Ayase tricks Seiji to go to a movie with her she completes a carefully planed day for the couple. As Seiji gets to the date, Midori sees Ayase all dressed out, to her surprise. Will Seiji and Ayase end up together? 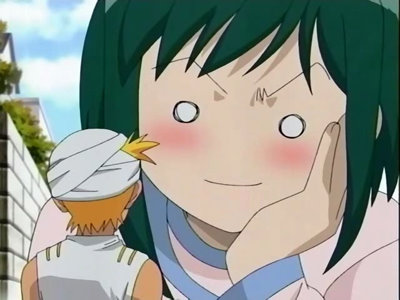 Seiji wakes up one morning and discovers that he has switched places with Midori! Midori is now actually sized, and Seiji is her right hand! How or when will they turn back to 'normal?' 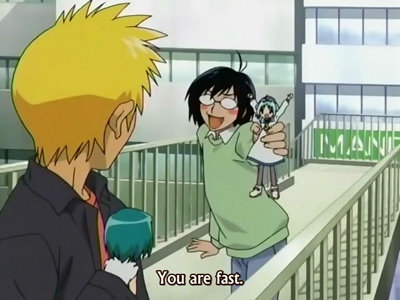 Seiji catches Shuichi Takamizawa taking pictures of him and Midori throughout town. Soon they find out that he has created a popular internet website, and Midori is the star! Is Midori ready for fame? Will Seiji let Shuichi continue to follow them without recourse? 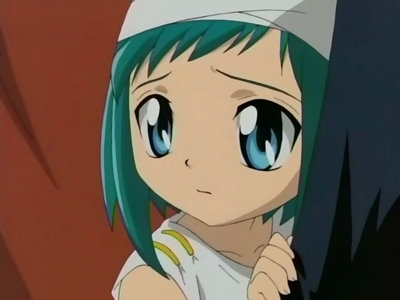 Distance of the Hearts

Kouta, a childhood friend of Midori's, has a strange dream that makes him believe that she is in a Snow White like coma. He finally asks Seiji to come with him to Midori's house to try to wake her up. Will a kiss from Seiji wake up the life size Midori? If so, what will happen to 'his' Midori?

My friend recommended this to me years back, telling me it's about a guy who's hand turns into a girl. To me, this idea sounds like an excuse for an anime packed full of fanservice and vulgar jokes, many of them probably involving the main character forgetting about his hand being a girl and using it for activities such as, er... well, I'll leave that to your imagination. ...and this is why I've never really felt a great urgency to try "Midori no Hibi".But now that I have finally gotten around to watching this, I have to admit it's not as bad as I thought it was going to be. Yes it did contain some of the distastefulness that I was expecting, but the dirty jokes didn't get out of hand (\*rim shot\*) and go as far as I'd feared. Instead, "Midori no Hibi" turned out to be something that's probably best described as a fun, entertaining anime that's not to be taken too seriously."Midori no Hibi" is essentially a romantic comedy, and the comedy is the main strength of it. A lot of it is pretty slap stick, but I couldn't help laughing out loud at times because some parts are just so funneh. The romance side has some nice touches too. One of its main strengths is the interaction and developing relationship between the two main characters Seiji and Midori, which is good since that's one of the focal points of the show. The story has originality, and did not turn out as predictable as I expected, but with such a bizarre set up, inevitably there are a lot of character "fudging" going on to make it work, like Midori's reaction after she first finds out what had happened to her. To be frank, I find it almost disturbing that she seems to be able to just accept the strange situation so readily and then adapt to it so quickly without missing the things in her old life that you'd expect to be important to her - she seems to care very little about her family, for example. The characters are generally likeable and it's easy to sympathise with their problems, but some of the character development feels hurried - there seem to be no transitional stage involved as Midori opens up from being an introvert, and the way one of the characters Ayase changed her attitude towards Seiji also seems a bit sudden.Even though "Midori no Hibi" does not hold up to close scrutiny, it passes easily for a casual watch due to its entertainment values. There are some Ecchi jokes that the series could have done without, but as I said there isn't as much as I thought there would be. Presentation wise, "Midori no Hibi" is fairly unremarkable to look at, but it does have a reasonably good sound track with some nice BGM's and a pretty good ending theme. The show was popular around the time of its release, but now the ratings seems to have fallen. Probably deserved - it's a mildly enjoyable, but ultimately forgettable watch.

Start a new discussion for Midori no Hibi anime. Please be fair to others, for the full rules do refer to the Discussion Rules page.