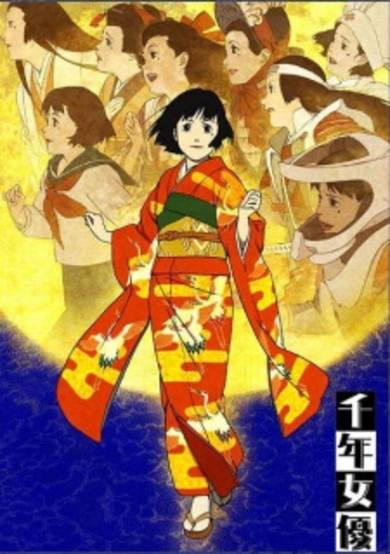 At the turn of the millennium, Ginei Studio's dilapidated buildings are set to be demolished. Ex-employee and filmmaker Genya Tachibana decides to honor this occasion with a commemorative documentary about the company's star actress: Chiyoko Fujiwara, the reclusive sweetheart of Shouwa Era cinema. Having finally obtained permission to interview the retired starlet, an enamored Genya drags along cynical cameraman Kyouji Ida to meet her, ready to put his lifelong idol back in the spotlight once more. Hidden in this secluded mountain retreat is a thousand years of history condensed into one lifetime, waiting to be narrated. Chiyoko's recollections take them on an illusionary journey through Japanese cinematic history that transcends the boundaries of reality; the saga of her acting career intertwines with her filmography, the actors in her life blend seamlessly with the characters on screen, and the present melds with the past. Though the actress may have retired at the height of her career 30 years ago, the curtain on her life's stage has yet to fall. [Written by MAL Rewrite]
User Count13614
Favorites Count349
Start Date14th Sep 2001
Next ReleaseInvalid date
Popularity Rank869
Rating Rank511
Age RatingPG
Age Rating GuideTeens 13 or older
Subtypemovie
Statusfinished

Millennium Actress is a movie about a life well lived. It's a story of a character through the decades, told through film as her life as her life through film. Beautifully animated and scored, but it's the story that captures the heart. It's worth every second and thoughtfully presented through an engaging narrative and dynamic camera. Amazing in many ways, and definitely worth watching and thinking about.

**As always, my reviews are spoiler free.** ***MAL-era import review; please excuse my lack of experience.***{::}**** Millennium Actress is another work of the late Satoshi Kon, a man who had an amazing ability to blur the lines between reality and dreams, even in a medium of almost entirely fiction. And like his other works, Millennium Actress doesn’t just tell a story, but takes you on a journey through the world and through the human mind. In this film, the viewer travels through decades of the life of the famous actress Chiyoko Fujiwara, following her as she chases a man she once met and a dream that she is always one step behind. **Story** - **10/10** The story begins when a reporter and fan of Chiyoko’s work, Genya, is sent with his cameraman to interview her about her rich career as an actress over the past several decades. In his possession is a key that belonged to Chiyoko that he had been in possession of for years, always looking for a chance to return it to her. When he presents it to her, she is taken aback. When Genya asks if the key was to something important, she responds, “To the most important thing in the world.” What follows is one of the most beautiful and creative methods of storytelling I have had the pleasure to see. The “interview” that Genya has with Chiyoko transforms into a visual story of her life which Genya observes as a 3<sup>rd</sup> party. It begins with Chiyoko as a teenager growing up in late 1930s Japan. She has a chance encounter with a mysterious man, and her life changes forever. Chiyoko sees a hooded figure running from police, chooses on a whim to misdirect them, and shelters the wounded man. He tells her stories of his beautiful home promising to take her there when Japan comes to a time of peace. Noticing something around his neck, she asks what it is, and he answers that it is “the key to the most important thing in the world.” She asks to ponder what it could be over night, and they promise to meet again the next day. However, he is gone, and lines between reality and film begin to blur. Suddenly she is chasing the mysterious man on a train down railway station, collapsing to her knees in tears. She vows to find him. Genya, having observed this, remarks that “he cried 53 times at this scene.” What follows is a story of Chiyoko’s life as an actress, traveling around the world and through time, always chasing down a man whose name she didn’t even know. Through place and time, the viewer and Genya follow her through movie sets and reality, demonstrating some of the best cinematography in the animated medium, full of flawless transitions and symbolism. It has to be seen to be believed. I cannot go into the ending without revealing spoilers, but it contains one of the most amazing twists and beautiful endings I have seen in any film. **Animation - 9/10** Anyone familiar with other works of Satoshi Kon and animated by Studio Madhouse will be familiar with the style of Millennium Actress. Though it has aged significantly, being aired over 10 years ago, the detail and fluidity of the animation is still quite apparent. Character models are detailed and constantly varying to fit the time and place they happen to find themselves in. This is another strength of the animation; unlike many series and movies which confine themselves to the same locales, this film takes place in dozens of completely varied sets, from science fiction to feudal Japan. It makes these transitions so smoothly that it can be almost startling; a few minutes pass and without your noticing time has changed by decades, all demonstrated through the films that Chiyoko stars in. The amount of effort that was taken to put in this level of detail must have been monumental. While some may be bothered by the dated style at first, you will likely lose yourself to the story in no time at all, and come away actually enjoying the art style at the end. ***Definitely some Satoshi Kon strangeness at work here*** **Sound - 6/10** Unfortunately, the soundtrack was not especially impressive. While it always matched the ever-changing setting, it was never memorable. In fact, large portions of the movie are totally silent. The voice acting was quite good, however. **Characters - 9/10** Chiyoko is really the only notable character here. Genya is at heart an insert or companion for the viewer, and the mysterious man she chases is treated as closely to an object as a person. Chiyoko, however, has beautiful development throughout the story both as a person and an actress. Her motives are a bit unclear, but her single-minded determinedness to track down the man from her childhood gives her a level of development that few movie leads can match. In fact, the only competition in my mind is Mima from Perfect Blue, another of Kon’s fantastic works. By the end of the film, the viewer has lived Chiyoko’s entire life with her, and will be so invested in her story that the ending will feel unbelievably personal. She feels like a lifelong friend by the time the credits finally roll. **Enjoyment - 9/10** This film was captivating from beginning to end. Only Kon can make movies like this, where the viewer feels more like a character than a simple observer. The level of detail and thought that went into the cinematography and settings this movie explores is simply phenomenal. **Other Thoughts** I’ll end with the same quote I opened with: “After all, it’s the chasing after him I really love.” By the end of the film, the very exploration of a life itself, these words will hit you like nothing ever has before.

Start a new discussion for Sennen Joyuu anime. Please be fair to others, for the full rules do refer to the Discussion Rules page.