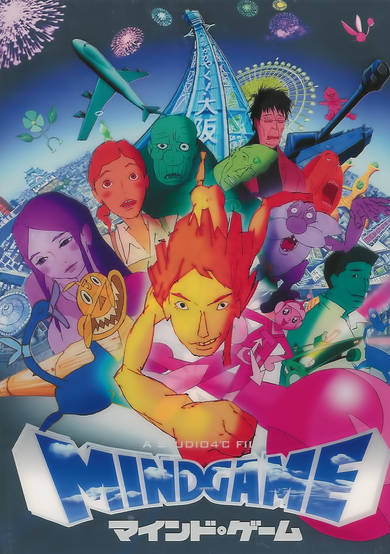 Nishi has always loved Myon since they were little. And now as adults, he wants to pursue his dream of becoming a manga artist and marrying his childhood sweetheart. There's one problem, though. She's already been proposed to and she thinks Nishi is too much of a wimp. But upon meeting the fiancé while at her family's diner and accepting him as a good guy, they encounter a couple Yakuza (Japanese mafia), only to have Nishi grasp a certain revelation. And, with his newly aquired look on life, adventures abound as he, Myon, and her sister Yan escape the Yakuza into a most unlikely location where they meet an old man... (Source: ANN)
User Count6458
Favorites Count103
Start Date7th Aug 2004
Next ReleaseInvalid date
Popularity Rank1710
Rating Rank1466
Age RatingR
Age Rating Guide17+ (violence & profanity)
Subtypemovie
Statusfinished

Drizzling rain being seen through the windscreen of a car; A guy running around with wearing a football shirt and a... is that a diaper? A girl gets her leg trapped in the door of a train and flounders around like a fish out of water.From the first random images of "Mind Game" that looks like it was drawn by a 6 year old, I can already tell that it's one of those titles that is no doubt hailed in the spirit of modern art as a mind blowing work of genius by some, and dismissed as more worthless than a pile of steaming dog turd on the pavement by others. If you're one of those people who will eagerly lap up anything that's different just because it's different, then this is one for you to watch. But if, like me, you only like originality when the resulting product is actually good, then I'd recommend you to steer well clear of "Mind Game". No one can deny that the style of "Mind Game" is quite unique, but I for one found it to be obnoxiously pretentious. If I wanted to admire some diabolical scrawl such as this, I can go and ogle at the "masterpieces" that my younger brother drew in school when he was about 10. Or maybe not, since those are probably better drawn than "Mind Game".Underneath the crazy presentation lies a crazy adventure story. Just like the "FLCL" and "Dead Leaves", the crazy bits made me switch off totally, but brushing those issues aside, the rest of the movie (the little there is left) is strangely compelling, and I sometimes found myself totally drawn towards its powerful message of taking risks and living life to the full. The story itself has its moments of worth, and there is a surprising amount of character development. And undeniably, there are some moments of comedy genius (like the bit where the main guy tries to drive the car like James Bond) that had me helpless with laughter, but overall there's just too much crap mixed into this movie for my liking. The ending also sucks bad - if I understood it correctly, then it makes the rest of the movie even less worthwhile. In conclusion, "Mind Game" is certainly an interesting anime in parts, but I don't think those few parts of interest are enough to salvage this wreck of a movie.

Mind Game was a rather interesting anime film for me to watch. I went into it without knowing what to expect and ended up getting something along the lines of FLCL in terms of story and animation. As they are very similar.  Story: As far as story goes their isn't much of one to speak of. Basically the theme of this anime is live every moment to its fullest and the anime itself turns into an adventure story for our main characters Nishi and Myon. Outside of the fact that this is an adventure story the general plot is rather simple and easy to follow once you know whats going on. But, I feel its the way they present the story thats interesting. Instead of using just one type of animation they do multiple different kinds of animation from traditional to pastel animation. This style of animation made the story really interesting to watch and the characters themselves also receive a large amount of development during the story as well. Animation: As mentioned earlier the animation is very odd. It switches from multiple different kinds of animation that make the show it self seem a bit sporadic in terms of animation quality. Personally I thought it made the story seem more interesting. I think if it wasn't for the style of animation used the story would be rather simple and boring in general. The animation also does a good job at showing without telling. You get to see things happen without the main cast going owe this happened... Sound: The voice acting quality and overall music fit the movie and I thought it was good overall. So far Mind Game is only available in sub so that would be the best way for anyone interested to watch it. Some of the music tracks seemed a bit lackluster though and I didn't find anything to stand out to the point where I would want to listen to it without visual accompaniment.  Characters: One of the best parts of this film was the character development. The main cast all see a decent amount of development throughout the film. Our main character Nishi goes from a spineless coward to someone who is willing to take action and risk his life for his friends during the earlier parts of the film and throughout the rest of the film you see how these changes affect his personality. Yan and Myon the two female leads to the film also develop and are allowed to pursue their dream and come to terms with themselves as well.  It is because all of these characters grow and develop throughout the film that I found it to be a rather interesting watch. Final Thoughts: What Mind Game lacks in the story department it makes up for in character development and animation. The animation is very unique and probably isn't for everyone. The animation makes Mind Game seem more like an art piece then a film. The characters are interesting and develop through the course of the film which I feel helped make up for the simplistic story as a whole. While Mind Game might not be for everyone I do think it is at least worth the watch  Final Score 6.5/10 Enjoyment:  Overall, an enjoyable film 8/10

Start a new discussion for Mind Game anime. Please be fair to others, for the full rules do refer to the Discussion Rules page.