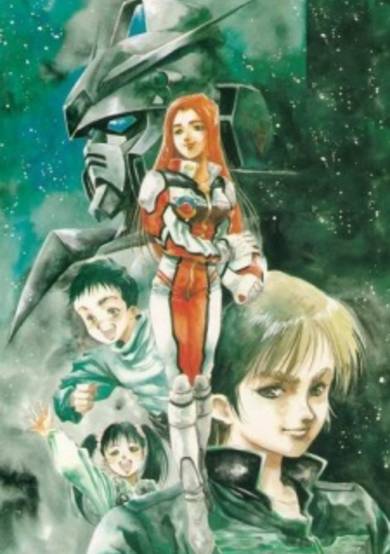 Alfred Izuruha is a 10-year-old who lives in the neutral colony cluster of Side 6 and, like most boys his age, is obsessed with the war between the Earth Federation and the Principality of Zeon. Unbeknownst to him, Al's next-door neighbor, Christina, is the test pilot of a prototype Gundam being developed in secret by the Earth Federation in the colony. A Zeon Special Forces team is assembled and tasked with infiltrating the colony in order to either steal or destroy it. When a skirmish breaks out between the Federation and infiltrating Zeon forces, the fascinated Alfred stumbles upon a Zaku mobile suit that has been shot down, piloted by Zeon rookie Bernard "Bernie" Wiseman. After this encounter, the two start a mutual friendship, so Alfred can learn more about the war that interests him so much, and Bernie can acquire inside information about the colony to aid his team's mission. [Written by MAL Rewrite]
User Count4722
Favorites Count100
Start Date25th Mar 1989
Next ReleaseInvalid date
Popularity Rank2119
Rating Rank891
Age RatingPG
Age Rating GuideTeens 13 or older
SubtypeOVA
Statusfinished

All Mobile Suit Gundam 0080: War in the Pocket released episodes

How Many Miles to the Battlefield?

Reflections in a Brown Eye

And at the End of the Rainbow?

Over the River and Through the Woods

Say it Ain't So, Bernie!

War in the Pocket

Let's get some Christmas themed anime all up in this review place!First impressions were bad, primarily because it set up exactly the same way every single other friggen Gundam series seems to do. We’re on a space colony and here’s this kid who loves giant robots but ohsnap robots attack! The kid finds a giant robot with no pilot in it. It’s around about there that this show differentiates itself because the kid in question is about 8 years old. Even when the pilot of the downed robot picks himself up and points a gun at him, the kid is still jumping about with unbridled enthusiasm, wanting to have a look at the Zeon gun and asking to have a go in the cockpit.The primary theme of War in the Pocket is…well, it’s Gundam so it’s WAR IS BAD. But being a bit more specific, it’s about the childish wonder and dreams of war and the military versus the grim reality of what it actually entails. It’s not just about war being full of death and destruction and all that, but also how the glamour isn’t really there and the frailty of what appears like magnificent war machines being exposed. The story is primarily about Bernie, a rookie pilot from Zeon, and his relationship with Al, the enthusiastic kid I mentioned earlier. It’s a familiar story about the failure of an adult lying to a child to gain his respect and be hero worshipped, but when forced to face by the reality of the situation he draws strength from the belief of the kid who believes in him and becomes the hero he pretended he was.Calling Bernie a failure isn’t really correct. It’s more that he’s hopelessly out of his depth. He boasts to Alfred that he’s an ace pilot who has shot down loads of Federation mechas, but in reality he’s some nobody whose only battle experience is being instantly shot down. Yet he’s placed on a veteran commando team who give him tasks simply to keep him out of their way. If anything looks like its going wrong in the plan, it’s always his fault. I don’t mean that ironically either, the show is very deliberate about how it will be little things that he says or does that causes their plans to go wrong.That’s something in general that impressed me about War in the Pocket. It’s very deliberately put together. There’s nothing there that doesn’t need to be there, and all the scriptwriting is incredibly tight. Something I wanted to throw myself down on the floor in praise in was how it allowed character’s personalities to play out without ever having to point them out. The commando crew are all men of habit. Things like how their captain would put cigarettes in his mouth but never light one, or how one of them would make a habit of filling up his hip flask and hanging it up in his robot. It’s a sign at how long they’ve been doing this, while in comparison poor old Bernie has no traditions like that. It’s a small thing, but these traits build up.Bernie is the king of this, and easily the best character of the show. His growth from bragging but inexperienced rookie to role model for Alfred is fantastic, particularly again in the way the show never feels to point all this out to us. His relationship with the female Federation pilot Chris was pretty great in how it was clear they had feelings, but both seemed to know that they were ultimately on two different sides of this war and would never be together. The hopeless romantic in me clung to the belief that this would be power of love overcoming their opposing sides of this conflict.Which is what makes that ending the biggest kick in the gut.The BIGGEST kick in the gut, to the point that I was gripping the side of my face going “oh god no don’t do this noo”. Let me make this clear that I mean this in a good way. The painful fragility on this war machine Bernie and Alfred had poured their soul into rebuilding. The way it wraps back into the pointlessness of the conflict, particularly with who was piloting the Gundam, gives the show a much better narrative arc to something like Grave of the Fireflies, where the depression just feels relentless and done deliberately to hit you. In War in the Pocket, it’s ultimately the only direction that would have given the show the proper conclusion to what it was building up.It’s there that you also realise how deliberately the whole thing is put together. It’s not that it ‘gets better’ or anything. War in the Pocket is always good, but the further you get into it, the more you realise how everything ties together. It’s the mark of fine storytelling. I will say though that I do think it missed a trick by not playing Bernie’s video as the very last thing. I get why they wanted to have the shot of the kids saying “don’t mind, there will be another war soon” as the last thing because of how it ties into Alfred’s loss of innocence. I guess this is a selfish desire, but the doomed relationship between Bernie and Chris felt like the perfect symbol of the pointlessness of the conflict. With Bernie’s final words in that video asking Al to hi to Chris for him, it fucking hit me like a sledgehammer.War in the Pocket is without doubt the best Gundam I’ve seen by a considerable distance, and with the possible exception of FLCL, the best short OVA series I’ve ever seen.

War in the Pocket cuts deep and hard and quick. This OVA Gundam series is short and progresses in movie style. The first three episodes build up characters, prepare plot, and define themes, then the story kicks into gear for the final three episodes, which reveals the bitter repercussions of war. TV shows and movies don't like to ruminate on the reality of war: it sucks. Sure, in war movies, people die, yet it's almost always a random incident for a shallow side character or a sacrificial reason that makes the victim a martyr or hero. War in the Pocket doesn't hide the fact that in war, people often die without cause, not in the iconic, glorified ways we prefer to contrive and see in entertainment because they make us feel better or at least, not as bad. No one likes to consider the innate truth in any war: many people die for no redeeming reason. Cue War in the Pocket, a show – an anime even – that isn't afraid to portray the pain, sadness, and often-times pointlessness of war. Not only does War in the Pocket address war in an unglorified manner, it examines it from the eyes of a kid. Not just any kid, either, one that represents most boys on the planet: a kid naively obsessed with the excitement of war and soldiers and battles. I was just like Al as a kid, playing with my Lego's (and even my own Gundam models) in huge battles and conquests. I didn't understand the gravity of war as much then, and I still don't fully understand it, yet this show beautifully delves into a child's realization of the horrors involved. Hand drawn in a cartoon, but serious manner, the animation provides an apt context for a child-like perspective of war. The bright, vividness is representative of the positivity and innate energy in childhood. Darker tones tinge elements of the animation, especially noticeable with the mobile suits. This subtle shading makes the huge mechs ominous and portending. So the show has fitting animation, a focus on the raw themes of war, and a perspective from the protagonist, a kid, Al. It still needs more to be a good story, though, right? Enter the two primary side characters Chris and Bernie. Al becomes involved in the war by spying for several Zeon infiltrators, including Bernie, attempting to locate and destroy a gundam hidden on the colony. Bernie becomes a big brother figure to Al through their endeavors. Chris, Al's neighbor, is secretly the federation pilot of the gundam, and having returned to the colony, she befriends Al. What ensues is obviously a recipe for disaster, with Al stuck hopelessly in the middle. The relationships between Chris and Al and Bernie and Al are what make the show more than just a kid's war documentary and an emotional, well-told story. Both Al and Bernie develop and all three of the primary characters have motivations for fighting that are either explained or easily intuited. Al's initial involvement is because war is fun. Chris fights out of fear of losing her friends and family. Bernie has his own reasons, in the end. These additions to the story provide important answers to why the characters are involved in the fighting. By revealing their motivations, giving them individualized personalities, and delving into their relationships, the story creates a taut, empathetic connection with the viewer. Other minor characters, including the other Zeeks inside the colony, Al's mom, and Al's friends serve purposes, too. Al's friends and the soldiers provide very contrasting perspectives on war and attitudes in general. The kids are excited and happy, but the soldiers bleak and hard. Al's friends and family serve to strengthen the childhood atmosphere. Several scenes take place in the elementary school and at home, strengthening the connection to the viewer by replicating relatable childhood experiences. You'll feel like your a kid at school having pointless arguments with your classmates and, similarly, like a child ignoring your mother's nagging. I think most everyone in the audience did things like this growing up, and the show wisely picks universal instances of childhood to relate to the viewer and reel them in. War in the Pocket is a great story, not about a hero or redemption of some kind. Unlike Gundam's repetitive hero's journey, War in the Pocket is a unique story about the reality of war and coming to comprehend that reality from the viewpoint of a child. Characters and relationships give the tale oomph and bridge the gap between the viewer and the anime. What follows is a nostalgic, emotionally powerfully dive, the likes of which is rarely attempted in any medium and certainly never before in the gundam franchise.

Start a new discussion for Mobile Suit Gundam 0080: War in the Pocket anime. Please be fair to others, for the full rules do refer to the Discussion Rules page.