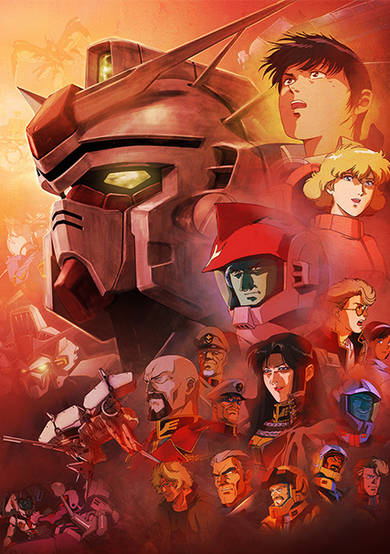 U.C. 0083. Three years after the end of the catastrophic One Year War, peace on Earth and the colonies is shattered by the presence of the Delaz Fleet, a rogue Zeon military group loyal to the ideals of the late dictator Gihren Zabi. Delaz Fleet's ace pilot Anavel Gato, once hailed as "The Nightmare of Solomon," infiltrates the Federation's Torrington base in Australia and steals the nuclear-armed Gundam GP02A "Physalis" prototype. Rookie pilot Kou Uraki—with the aid of Anaheim Electronics engineer Nina Purpleton and the crew of the carrier Albion—pilots the Gundam GP01 "Zephyranthes" prototype in an attempt to recover the stolen Gundam unit and prevent another war from breaking out. (Source: ANN)

I only watched "Mobile Suit Gundam 0083: Stardust Memory" because someone gave the bootleg DVD's to me for free. And since those DVD's only had Chinese subtitles, I had to watch it in dub as my Chinese reading skills kinda suck these days due to lack of use. This may have resulted in lessening my enjoyment of the show, as it doesn't exactly have the best dubs I've heard... but at least they're not the worst either.From what I can gather, "Gundam 0083" is a continuation of a chain of earlier Gundam series which eventually can be traced back to the original Gundam series, "Mobile Suit Gundam: 0079". The original Gundam series is supposed to be pretty good, but it needs to be a lot better than "Gundam 0083" in order to live up to that kind of praise, because "Gundam 0083" is a bit lame. I may not know how good the series sound in Japanese, but given the uninspiring script, I doubt even a bunch of highly skilled voice actors would be able to make it sound good.It may be because I hadn't watched the previous series, but I found the story in "Gundam 0083" to be somewhat confusing. "Gundam 0083" fails as a standalone series, as it doesn't really provide any background on the seeds of conflict that has obviously been sewn previous to this installment. I don't know who this Zeon group is, I don't know where they've recruited this psycho woman from... I don't even know why they're fighting. They're sacrificing their lives for what ideals again??At the heart of the "Gundam 0083", there are lots of paper thin characters. Knowing full well they're pretty poor, the producers then sacrificed realism and rationality in order to make them "interesting". As a result we end up with lots of strange twists in the storyline where people make bizarre decisions to try and spice up the predictable plot. The ending is terrible too. If, by some miracle, it managed to resolve anything, I must have missed it.Having said all this, most of this series was still enjoyable to some extent. The development of the relationship between Nina and Kou is quite pleasant to watch, even though it is a bit predictable. Visually, "Gundam 0083" has some nice and distinguishable character designs, and the battles scenes are competently done, if not exactly memorable. There is one thing that is memorable about "Gundam 0083", however, and that's the second opening theme "Men of Destiny". It's a very cheesey 80's kind of song... and I love it! Its grand and energetic feel means that it works nicely as the theme to a Gundam series. A pity the anime itself isn't nearly as good. Interestingly, I found my viewing experience of "Gundam 0083" to be opposite to that of "Gundam Seed Destiny". With the latter, I sometimes found it an effort to watch even though I acknowledge the quality of the anime. With "Gundam 0083", even though I knew what I was watching isn't particularly good, I just couldn't seem to stop watching it! Still, I guess I should count that as a positive trait.

Start a new discussion for Mobile Suit Gundam 0083: Stardust Memory anime. Please be fair to others, for the full rules do refer to the Discussion Rules page.