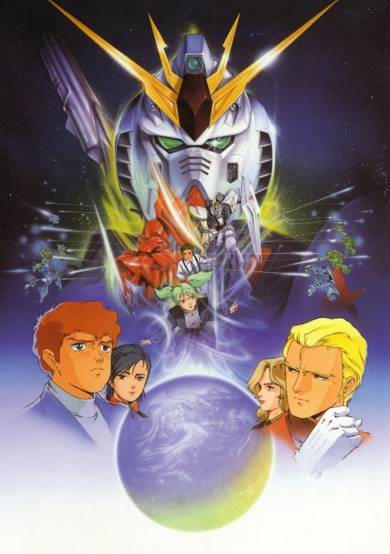 Mobile Suit Gundam: Char's Counterattack (CCA) is a frustrating and confusing conclusion to the rivalry between two of the Universal Centuries best pilots.  Mech Design: The new mobile suits are good for the most part, especially the Geara Doga. Char's new machine, the Sazabi does look a bit too large and chubby for its famously fast pilot. Story: 'Them gosh darn spacenoids trying to drop stuff on Earth again...' See Character section. Animation: High budget, hand-drawn animation. Viewing in 1080p is a must. The lack of multi-tone shading in some scenes is jarring. Furthermore, it suffers from the 'mechs moving over a static background in space' that has plagued many mech battles before and since. Sound: The soundtrack is forgettable. Nowhere near as a solid as 0079 and Zeta's were. Character: CCA is sometimes jokingly said to stand for Char's Character Assassination for good reason. His behavior makes little to no sense. The same can be said for most other characters in the movie. The new characters introduced for the movie are given no time to develop properly. Enjoyment/Overall: CCA is visually appealing, and probably worth watching. However, it is a disappointing conclusion to a rivalry that viewers have been following for 100+ episodes. Char and Amuro deserved a better send-off than this.

Story (8): The story is a good, but flawed conclusion to the Char, and Amuro rivalry. The big flaw being that not very much is told of what happened to Char and Amuro in between  ZZ and char's counterattack. Also the bit's involving the new charters while usually not bad pale in compression to the parts with Char and Amuro. The story however makes up for it's flaws with the ideological debate between Amuro, and Char which is really well done expanding upon some of the themes of Zeta, and 0079  form an optimistic, and cynical prescriptive. Characters (8): Amuro and Char are really good interesting characters. Char's progression does make sense when you think about it not like it's unreasonable that Char became disillusioned with the people living on Earth in the event's leading up to Char's counterattack, though how he did should have been included in the movie. The new characters are either forgettable, or could have been good but didn't receive enough development. Art (9) and Animation (8):  Good animation for the most part. I absolutely love the art in Chars counterattack, the characters are well drawn, and the mechs look really awesome. Sound (6): Aside form the ending song the music is forgettable. Conclusion: Char's counterattack is a thrilling edge of your seat conclusion to the Char and Amuro rivalry. It has problems such as lack of back story and the new characters paling in comparison to the reoccurring chatterers. However the story and the reoccurring characters are really good and the movie features amazing art.

Start a new discussion for Mobile Suit Gundam: Char's Counterattack anime. Please be fair to others, for the full rules do refer to the Discussion Rules page.