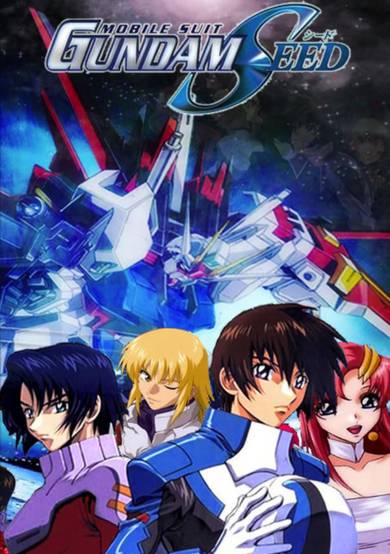 C.E. 71: In the midst of war between the Naturals (OMNI) and Coordinators (ZAFT), a unit from ZAFT is dispatched to hijack the Earth Alliance's newly developed mobile suits on the neutral colony of Heliopolis. Orb Civilian Coordinator Kira Yamato attends the technical college on Heliopolis. After ZAFT hijacks 4 of the 5 mobile suits, Kira stumbles upon the last one, Strike, forced to pilot it to save his and his friend's lives. During this confusion, Kira also reunites with his childhood Coordinator friend, Athrun Zala, who ironically turns out to be a ZAFT soldier and one of the hijackers at Heliopolis. Having control of Strike, Kira joins the Earth Alliance boarding the ship known as Archangel, to protect his friends while despairing over becoming the enemy of his childhood friend and people.
User Count10470
Favorites Count178
Start Date5th Oct 2002
Next ReleaseInvalid date
Popularity Rank1127
Rating Rank1612
Age RatingR
Age Rating Guide17+ (violence & profanity)
SubtypeTV
Statusfinished 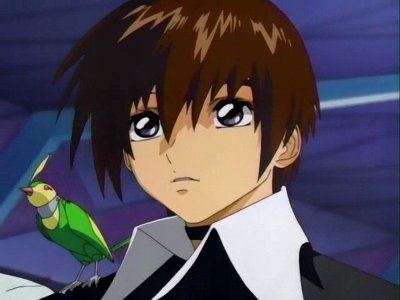 The Orb Union space colony, Heliopolis, is attacked by ZAFT, despite its neutrality since the beginning of the Bloody Valentine War. Kira Yamato accidentally sees the Earth Alliance's new prototype mobile suits, which have been secretly constructed at the Heliopolis Morgenroete factory. He encounters his childhood friend, Athrun Zala, now a ZAFT soldier as one of the attackers. 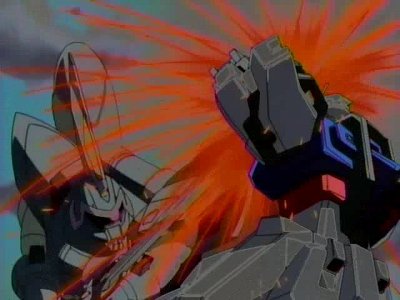 PHASE-02 Its Name is Gundam

ZAFT is able to steal four of the five G Project prototype mobile suits, leaving only the GAT-X105 Strike. With Murrue Ramius unable to pilot it effectively, Kira pilots the Strike and defends Heliopolis against the invading ZAFT forces to protect his friends. Ensign Natarle Badgiruel takes command of the new mobile assault ship Archangel with the surviving crew members. 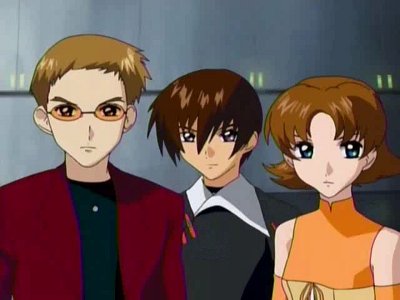 Lt. Murrue Ramius takes over as captain of the Archangel and Kira and his friends are detained for seeing top secret military weapons. Rau Le Creuset is determined to capture the Strike after seeing how well it moved and sends out mobile suits to retrieve it. Disobeying orders, Athrun also dispatches so he could confirm if Kira is the one piloting the Strike, but when he finds his answer, Heliopolis crumbles as it sustains too much damage. 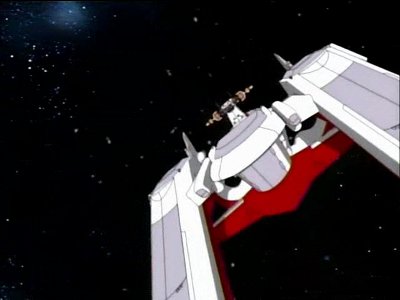 Kira discovers a malfunctioning lifeboat and brings it aboard the Archangel. Everyone is surprised to find Flay Allster as one of the rescued civilians. The Archangel decides to head for the Eurasian Federation military satellite Artemis to seek help. Rau Le Creuset follows and plans an attack on the Archangel. Kira decides to continue piloting the Strike and his friends volunteer to become members of the Archangel crew as his support. 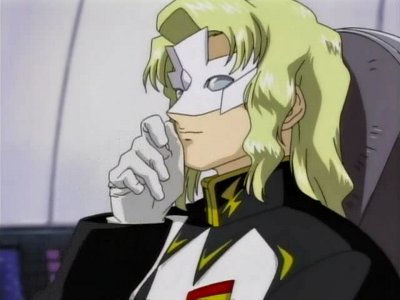 Mu La Flaga and Kira launch a counteroffensive against the ZAFT ship Vesalius. The Strike's Phase Shift Armor runs out of power in the middle of the battle and Athrun uses this moment to grab the Strike so he can take Kira with him, but Kira frees himself with Mu's help. 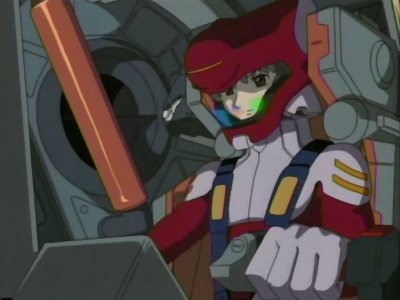 The Archangel and its crew are held captive by the Artemis forces. Nicol Amalfi in his GAT-X207 Blitz attacks Artemis, using its Mirage Colloid armor to remain effectively invisible and destroys the Umbrella of Artemis, which protects the asteroid fortress. During the attack, the Archangel is able to escape. 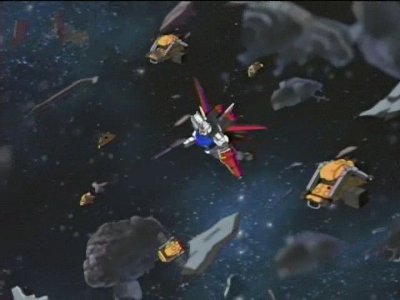 PHASE-07 The Scar of Space

The Archangel forages for water in the Debris Belt. They are shocked to find themselves in the ruins of Junius Seven, so the crew decides to hold a memorial. As they are excavating ice found around the ruin, a ZAFT mobile suit attacks, but Kira dispatches him. Kira finds a floating lifepod and takes it aboard. 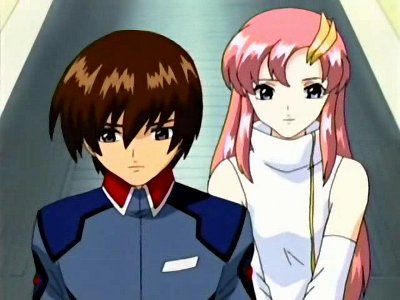 PHASE-08 The Songstress of the Enemy Forces

Lacus Clyne, the daughter of PLANT Supreme Council Chairman Siegel Clyne, is found within the lifepod. Her presence causes tension within the crew, but when the crew receives a message from the 8th Fleet that they are being searched and rescued, they are overjoyed. 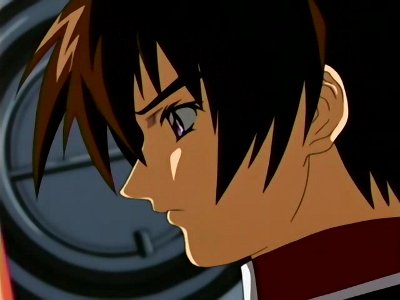 The Archangel is to meet with the 8th fleet but is attacked by the Le Creuset Team. Flay witnesses the death of her father when Kira fails to protect the escort ships. In desperation, the Archangel reveals Lacus is on board the ship, causing the attackers to withdraw. 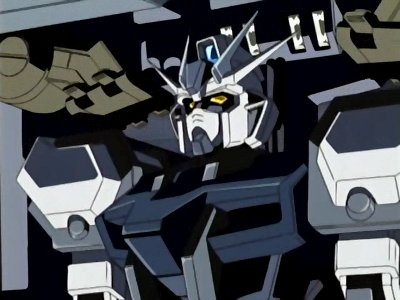 With everything that has happened, Kira becomes depressed. He is comforted by Lacus, who is strolling around the ship without permission. Kira returns Lacus to Athrun against orders, but refuses Athrun's invitation to change sides.

The Gundam franchise is undeniably the "name franchise" when it comes to mecha anime - it's one of the first series most people will associate with the genre whenever they think of it.  While most Gundam fans recommend watching in production order, I decided to have SEED be my first taste of the Gundam franchise, due to the fact that I had heard that it was basically a modernized version of the original series.  And I could not have chosen a better series to start with. The story for Gundam SEED is, from what I understand, somewhat typical for most Gundam series - 2 factions of humanity are at war with one another, and it's not so much a "good vs evil" conflict, but rather, a "one side vs the other" one - the story presents the 2 sides as both having good and bad people, so you can root for whoever you want without having to feel like you're supporting the "Bad guys".  However, I found it somewhat interesting that the way the story begins actually reminded me of another mecha anime, RahXephon - in both stories, the male lead (Ayato Kamina in RahXephon, Kira Yamato in Gundam SEED) is living in a city (in RahXephon)/a colony (in Gundam SEED), and during an attack on where the male lead is living (in RahXephon, the attack is by TERRA; in Gundam SEED, ZAFT is behind the attack), he meets a woman (Haruka Shitow in RahXephon, Murrue Ramius in Gundam SEED - coincidentally, both have somewhat similar personalities), who causes a chain of events that leads to the male lead piloting a mecha and leaving their home (there is a slight difference - Haruka Shitow is indirectly responsible for causing the events that lead to Ayato Kamina becoming the pilot of the RahXephon; Murrue Ramius forces Kira into the cockpit of the Strike Gundam to save him and herself from an explosion).  The plot is very solid overall, but there are some minor things that I felt were plot holes - one of the most notable ones involves nuclear weapons. The animation reminds me of a prototype of the style used in Code Geass - although I don't think CLAMP was involved in the character design of this show.  The mechas are all hand drawn, which is always a good thing.  However, there was a lot of recycled animation - while it's not noticeable early on, as the show progresses, it becomes much more noticeable.  Other than that, I found the animation to be great. The OST is flawless - but considering the fact that one of the main love interests, Lacus Clyne, is a pop star, I would've be surprised if the OST was terrible.  As for the opening and ending themes, there were a large number, with my favorite opening being the first ("Invoke" by T.M Revolution), and that goes for the ending as well ("Anna ni Isshodattanon" by See-Saw). The characters are also great - Kira Yamato is a character that I found myself rooting for right away, and his rival, Athrun Zala, won me over pretty quickly.  Even some characters I thought I would end up hating, like Yzak Joule, ended up winning me over by the end.  In particular, I found myself to be a huge fan of 2 characters - Dearka Elsman and Murrue Ramius.  Of course, there were some characters I legitimately hated, most notably Flay Allster (or as I like to call her, "Bitchus Clone") and Muruta Azrael. Overall, my introduction to Gundam was well worth my time, and the enjoyment I had is what I hope to have in future Gundam Franchises.  While I might prefer the deep and powerful symbolism of RahXephon or the political and military actions of Code Geass, Gundam is a series that I will definitely be revisiting in the future.

This was the first anime i ever got into when i was about 11 and its one of my top faves 9 years later lol. I love everything about it, It has everything from a great story line, friendships, romance (including love triangles) betrayals, and fighting in mobile suits XD Its very futuristic and if you like si-fi id recommend it. The only warning i have is that some parts get very emotional and sad, so be prepared to cry. I still do xx

Start a new discussion for Mobile Suit Gundam SEED anime. Please be fair to others, for the full rules do refer to the Discussion Rules page.