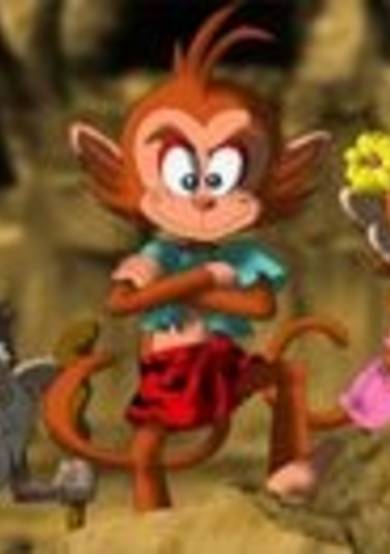 From out of the fires of space he was born... Kongo, a monkey made of stone, magically brought to life. Obsessed with a desire to learn and a need to be great, Kongo leaves his "family" on Flower Fruit Mountain in search of ancient knowledge and arcane wisdom. Not content to merely study and learn the mystical arts, Kongo masters the magic Jet Cloud, the first of his great weapons. With the power of the Jet Cloud, Kongo gains mastery of the air and returns to his adopted home just in time. Humans are laying claim to the monkeys` ancestral home. With his Jet Cloud and his newly-learned magical wisdom, Kongo defeats the humans and proclaims himself King of Flower Fruit Mountain. But in the Celestial Heavens, the gods are uneasy. A monkey defeating humans and declaring himself king? That cannot be allowed! They decide the monkeys must be taught a lesson and so they launch an attack on Kongo and all the monkeys of Flower Fruit Mountain. (Source: AniDB)
User Count88
Favorites Count0
Start Date20th Sep 1998
Next ReleaseInvalid date
Popularity Rank11202
Rating Rank
Age RatingPG
Age Rating GuideChildren
SubtypeTV
Statusfinished

Dearth Voyd discovers that a meteor is going to fall on the Earth. So, he sends Batty to find the Meteor and bring it back for his use. Meanwhile, an egg begins to hatch on top of a mountain that could change monkeys forever...

As Stone Monkey climbs the mountain, Subodye's disciples stop him. They challenge him. Stone Monkey passes their test, but they won't let him through. Subodye sees this and takes action, letting him through himself. Subodye then shows all of his disciples the clone technique, but it's not that simple. He tells his disciples that who ever discovers that technique first will be ranked number one! .

Zooming on the Jet Cloud

Kongo gets excited after he sees the master on a cloud, thinking that would be his new technique that he would have to learn. Thus, he follows Subodye through the forest, and finds his little hideout.

Prince Nata stops Kongo, and they begin to fight! Kongo uses the cloning technique, tricks Prince Nata, and goes back home to save everyone. Prince Nata eventually arrives to defeat Kongo in a re-match. The two fight in a duel and Kongo wins! Just as he is about to finish off Prince Nata, Fania arrives and tells him to spare Nata. Kongo listens to her and lets him go.

The Celestial Fleet Cruises Out

While Kongo accepts this honor, he later finds out that his job is the lowest ranking one in all of Celestial Heavens. Furious, Kongo demands the Prime Minister's job.

Supervisor of the Imperial Stable

Facing one of the strongest warriors in all of the Celestial Heavens, Kong must defeat him in order to realize his wish. Will Kongo overcome this newest opponent?!

A huge party is held in the Celestial Heavens! Will Kongo be able to make the party in time for his arrival?

Kongo and Lord Refang begin their fight. Kongo continuously scurries in fear, while Refang himself almost purposely in perception destroys many of the heavenly pillars holding up the roof of the area they had been within. After much destruction, Refang is forced to chase after the fleeing Kongo. This is so, until Kongo decides to fight back against Refang. After Kongo sees that Refang can manipulate his weapon at will, Kongo himself fights back with many weapons - thanks to Wowser. Refang however seems to favor his axe, in which he strikes down on Kongo's head. After Lao Tzu tells Refang to cease for a moment, Kongo turns into a bird to flee from Refang's sight. Refang this transforms himself into a larger bird, and continues to overpower Kongo in his transformations. Refeng then follows by chasing after the fearful Kongo until Kongo ends up in Lao Tzu's immortal furnace. Thus Refang rejoices in his triumph, until Kongo emerges alives, angry and wielding the unbeatable power rod.

The Celestial Heavens, nearly in flames by Kongo's anger over his job. Goddess Blossom plays along acting as she had been defeated until Kongo had even gone to the extent of holding the Jade Emperor himself hostage. Then Goddess Blossom effectively summons The Guardian to help before Kongo does more evil. When The Guardian appears before Kongo, he experiments with his abilities -- The Guardian will see if Kongo can escape from the very palm of his hand; if Kongo happens to succeed (in which it is impossible), The Guardian will grant Kongo the title of Jade Emperor. After Kongo is astounded over his failure, The Guardian banishes Kongo to the earth with a large stone hand sealed over him.

Start a new discussion for Monkey Magic anime. Please be fair to others, for the full rules do refer to the Discussion Rules page.