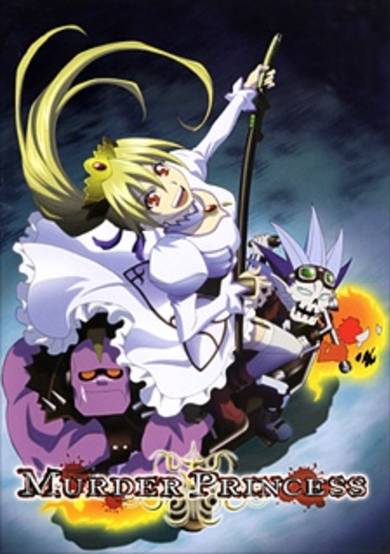 In the kingdom of Forland, a coup d'etat occurs which leads to the death of the King. In the last moments of his life, the King sends his second child, Princess Alita Forland to escape. Unfortunately, while fleeing, a life and death situation between Alita and the bloodthirsty bounty hunter Falis causes the two of them to switch bodies. Desperate for the safety of her Kingdom, Alita begs Falis to return and protect the Kingdom, offering herself as collateral. After a swift beating on the rebel forces, Falis resumes the title of Princess of Forland, leading to the birth of the most savage princess in their land, the "Murder Princess."
User Count4361
Favorites Count23
Start Date28th Mar 2007
Next ReleaseInvalid date
Popularity Rank2238
Rating Rank4781
Age RatingR
Age Rating Guide17+ (violence & profanity)
SubtypeOVA
Statusfinished

In order to preserve her noble bloodline, Princess Alita reluctantly flees her besieged kingdom. Her hasty escape takes a curious turn when a collision with the infamous bounty hunter Falis leads to an unwilling exchange of souls.

After the successful liberation of Forland Castle, Alita vows to serve Falis by posing as the newly-crowned queen’s handmaiden. All goes according to plan until the coronation festivities are interrupted by a genetically engineered monster.

A shattered keepsake creates a rift between Alita and Falis. When the bounty hunter races off to slay goblins, Alita is captured by Dr. Akamashi. Falis returns for a daring rescue, but she’ll need help to even the odds.

Prince Kaito’s return has Falis and her crew planning their departure. Although crushed, Alita reluctantly accepts her friend’s desire for adventure. But before they part ways, a mysterious woman uses her powers to cast the heroes as outlaws.

Falis is badly wounded during a daring escape. With Kaito and the royal army in hot pursuit, the unlikely band of allies strikes out for the border – until Dominikov’s fireside revelations reveal the powerful force drawing evil to Forland.

Alita, Falis, and their cyborg comrades return to Forland Castle to stop Kaito from abusing the awesome power of Te Oria. In the midst of a bloody battle, the bounty hunter realizes that destroying such a power is not without sacrifice.

Looking for a short, sweet, crazy, and action packed anime. Or just starting out in anime and not sure what to watch? Try this. Murder Princess a tale of survival and hardships that one must face all in the while seeking for vengeance. However, fate works in mysterious ways and can move one's heart when least expected. Personally, I loved this anime and was one of my first few that gave me a broad idea of what an action/adventure based anime would be like. Definitely worth the watch.

For a mere 6 episodes this anime stuffs a lot into it. Story: A famous mercenary ends up switching bodies with a princess, the princess agrees to pay her back for this injustice by giving her her body to do what she will with it. This is as sexual as it sounds, but this isn't hentai so it's played for laughs and sometimes a little bit of awww moments. Animation: A mix of good and bad, with the good being more prevalent overall. The characters tend to be well drawn, but the monsters lack detail which is fine considering most of them die pretty quickly anyways I suppose. Sound: Featuring the best opening I've seen (in my opinion) and solid voice acting, I really can't complain here. Final Thoughts: If there was a flaw in this anime it's that it's too short. However I don't take away score based on how long a series is, if it ends badly sure but just based on length is a bit debatable in my opinion as some people love short ones or that is all they have time for. Others feel like an anime needs to be over 100 episodes or it's far too short. For all the goodness they jam into 6 episodes it would be hard to complain.

Murder Princess is not an anime that you watch for the complex plot.  You watch it for the over the top, balls to the wall action. One day, Princess Alita Castilia Arago Forland's castle is under attack from a coup d'etat, and she escapes, at the cost of her servant, Milano, who sacrifices herself.  Alita escapes to the forest, but she is chased by a gigantic guardian of the forest.  She runs into a bounty hunter named Falis, and they fall off a cliff.  During the fall, Alita and Falis switch bodies.  After defeating the forest guardian, Alita (in Falis's body) begs Falis (in Alita's body) to save the kingdom.  Falis refuses at first, but Alita offers to be her servant, and give her the keys to the kingdom.  Falis agrees after hearing this, and the 2 (along with Falis's 2 companions) storm and retake the castle.  Alita changes her identity to Milano, and Falis (in Alita's body) becomes the queen, taking the nickname "Murder Princess". Animation wise, this is by Bee Train, a studio that I am not familiar with, but the animation is really good.  It just appeals to me visually.  Plus, Alita looks hot, and the fact that Falis is voiced by Colleen Clickenbeard (my favorite voice actress) makes her even more attractive. Sound wise, it fits the whole "over the top" action vibe, especially the opening.  It's easier to hear then to read a description, so just go watch the show if you want to experience the opening. Overall, I had a blast watching this show. FOR FANS OF/FURTHER RECOMMENDATIONS: Claymore Black Lagoon (equal amounts of action) Needless Scrapped Princess Hellsing Ultimate Berserk

Start a new discussion for Murder Princess anime. Please be fair to others, for the full rules do refer to the Discussion Rules page.