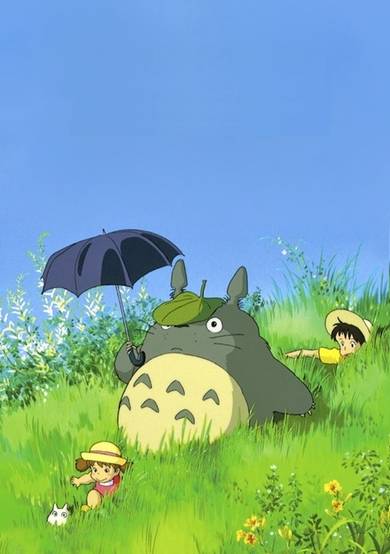 In 1950s Japan, Tatsuo Kusakabe relocates himself and his two daughters, Satsuki and Mei, to the countryside to be closer to their mother, who is hospitalized due to long-term illness. As the girls grow acquainted with rural life, Mei encounters a small, bunny-like creature in the yard one day. Chasing it into the forest, she finds "Totoro"—a giant, mystical forest spirit whom she soon befriends. Before long, Satsuki too meets Totoro, and the two girls suddenly find their lives filled with magical adventures in nature and fantastical creatures of the woods. [Written by MAL Rewrite]

All My Neighbor Totoro released episodes

If you're one of those people who still don't know what that thing featured on the Studio Ghibli company logo is, then the chances are, you haven't seen "My Neighbour Totoro" (for a while I thought it was meant to be a rather odd looking donkey myself). Well then, you've been missing out!"My Neighbour Totoro" is a delightful film that most young children - as well as a good proportion of older viewers - are sure to enjoy. It's not a particularly deep film, nor a particularly exciting film. At the heart of it, it's a simple tale about a family relocating to the countryside and the children meeting some weird and wonderful creatures, but it is so much more than that. The magic is in the characters, for "My Neighbour Totoro" is filled with some of the cutest, most iconic characters in anime. And amongst these unforgettable characters, it's the big, adorably fluffy King Totoro himself that steals the show, so it's fitting he is somewhat of a mascot for Studio Ghibli the way Mickey Mouse is for Disney.Fantastically weird non-human characters maybe a trait in Miyazaki films, but so are rather less interesting human ones, and "My Neighbour Totoro" inherits both of these traits. The human character has a familiar look about them, as though they're the bloodline relatives to the characters from other Miyazaki movies. Then there's the much used tomboy girl and the boy who wants to make friends with her set up that Miyazaki so likes to use. However, in the midst of these recycled characters, I do like Mei, who's like the adorable little sister that everyone would love to have.Like a lot of other Miyazaki films, "My Neighbour Totoro" does contain a dose of the usual environmental messages, but this isn't Miyazaki in one of his more preachy moods. In this film, the message isn't forced upon us, instead it is gently conveyed across by opening our eyes to the wonders of life. Totoro himself is like a kind of guardian of the forest, doing rain dances, making the trees spring up, all in a very lovable manner. For sure, a lot of the stuff is made up - obviously, in reality there are no creatures like Totoro that can perform miracles such as accelerating the growth of trees etc, but beneath all the imagination, the feelings and the message themselves are very genuine. This is helped along by the beauty of the artwork - I may not be a fan of Miyazaki's human character designs, but the beautifully drawn natural scenaries are as stunning as always.Even though this is film is rather uneventful - there aren't really any particularly dramatic or epic events, but it succeeds because there's a sense joy that's prevalent throughout. For instance the scene where Mei bounces up and down on the fluffy belly of Totoro, and another where rain drops falls repeatedly onto the nose of a rather dopey looking Totoro... these are all simple scenes, but they're scenes that are bursting with pure, innocent charm. It's these little things that makes "My Neighbour Totoro" a bit special, and it's these little things that makes it one of my favourites from the Ghibli collection.

Spectacular. Simply stunning. One of Miyazaki's best, if not the best. I'll admit, I'm somewhat biased when I say that. I've known this movie since I was three years old. It was one among a series that my parents bought to shut me up and keep me out of their hair. They'd put it on and then leave me with it. I watched it so many times that my childhood VHS was literally destroyed. I didn't get the chance to replace it until I was in my teens, and by then I'd discovered a whole host of fantastic movies from Studio Ghibli and Miyazaki Hayao. So perhaps my view is tainted by sentimentalism. That won't stop me from recommending it,however. I **sincerely** believe that this movie perfectly captures a childlike sense of wonder and crosses generational gaps with it. If you haven't seen it: Do so.

No commentary needed, IT'S TOTORO DAMMIT! Pros: Miyazaki's beautiful imagination Cons: Satsuki and Mei are kinda annoying at first, but you'll get used to them.

**Story** Usually when somebody thinks of Studio Ghibli, Totoro comes to mind. Even before I watched any Studio Ghibli movies I would think of Totoro right away whenever somebody mentioned the company. I have no idea why. “My Neighbor Totoro” is a great movie but it’s not the best Ghibli has made, and it’s not the first movie they made either. The reason why Ghibli’s trademark has become Totoro is because it is a memorable movie that perfectly shows the spirit of most Ghibli works. “My Neighbor Totoro” has the charming spirit that one might find in most Ghibli movies, and had the same environmental message, (though it doesn’t shove it’s message in your face like Princess Mononoke). While it may be a bit boring at times, it is hard not to love it. The biggest reason of why this movie is so lovable is because it captures the simplicity and imagination that we experience when we are young. It’s nostalgic, and it’s even a bit sad in a way. Kids love it because of the cute creatures, but adults (and maybe even teenagers) love it because it brings them back to their childhood years, where there was little stress and seemingly limitless possibilities. “My Neighbor Totoro” has a story that, while simple, is still very meaningful. **Animation** The animation is fluid and the art style is Ghibli, (yes, it’s an art style now). What more can I say? **Sound** The soundtrack is great. It’s not very memorable, but it fits every moment it needs to and helps to shape the atmosphere. It does it’s job and does it perfectly. Subbed or dubbed?: “Totoro” has both Japanese and English dubs, and both are really good. It depends on your preference. (Though I particularly like Satsuki’s voice in the English version). **Characters** The characters are just as loveable and sweet as the story itself. They have a little bit of development throughout the movie, but not as much as I would have liked to have seen. They lack depth, but have unique personalities. Satsuki and Mei are the main characters, (no, not Totoro), and they are part of why “My Neighbor Totoro” is so nostalgic. They themselves capture the fun of childhood, playing around and exploring. I wish I could still be like them, but it was enough to just be able to enjoy the ride with them. **Enjoyment** I really enjoyed this movie for the most part, but I was a bit bored at times. **Final Conclusion: 9/10**

Totoro is Studio chibli's second best movie. This is the movie to watch if you are having a bad day. Everytime i watch this i am extremely happy! That's not all have you listened the soundtrack for Totoro!? OMG!!! The soundtrack is so great i could just listen to it all day. This is also the best movie to show your children. Totoro is a movie for everyone, yes i said for everyone. This is for chidren, teens and adults.

Well my neighbor totoro  follow's the story of two girl's who move into a new house with there dad. I'm not good with japanese names. Then they meet spirit's one of them named totoro. They hang out have some fun but it's all boring I mean I'm icing over what happen's. Then nothing happen's they just have encounter's with ghost. In fact it was even annoying to watch for me just because of how almost all of the character's just annoyed me. Maybe if your seven and your a family kinda guy or maybe a pedophile might like it as for everyone else tho this is as boring as fuck.  I guess I'll talk about everything else then. The music was alright I mean it's about average not the best not bad. I'm not really into music myself so you might like it more than I did. I didn't enjoy at all I wished I had watched some thing else during that time.

Start a new discussion for My Neighbor Totoro anime. Please be fair to others, for the full rules do refer to the Discussion Rules page.