Nana Komatsu is a helpless, naïve 20-year-old who easily falls in love and becomes dependent and clingy to those around her. Even though she nurses ambitious dreams of removing herself from her provincial roots and finding her true calling, she ends up traveling to Tokyo with the humble reason of chasing her current boyfriend Shouji Endo. Nana Osaki, on the other hand, is a proud, enigmatic punk rock vocalist from a similarly rural background, who nurtures the desire to become a professional singer. Putting her career with a fairly popular band (and her passionate romance with one of its former members) firmly behind her, she boards the same train to Tokyo as Nana Komatsu. Through a fateful encounter in their journey toward the metropolis, the young women with the same given name are brought together, sparking a chain of events which eventually result in them sharing an apartment. As their friendship deepens, the two attempt to support each other through thick and thin, their deeply intertwined lives filled with romance, music, challenges, and heartbreaks that will ultimately test their seemingly unbreakable bond. [Written by MAL Rewrite] 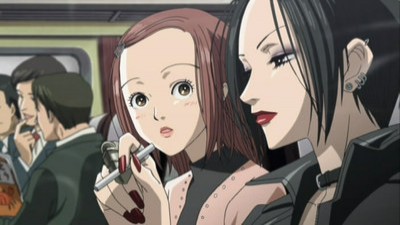 Nana recalls the first time she meet the other Nana on the train while traveling to Tokyo. 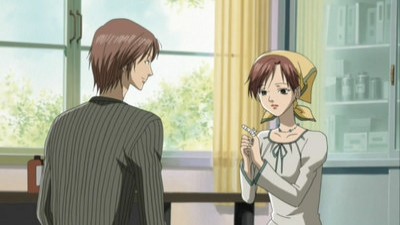 Komatsu Nana's past is revealed, from graduating high school to the time when her and Shoji met in Community College. 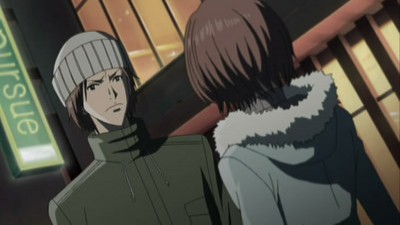 Nana likes Shoji, but has decided to remain friends so as not to ruin the relationship they have. Junko and Kyousuke reveal their plans to go to Tokyo and get into an art College there. Nana wants to go with them, but Shoji confronts her and says she should stay in their hometown. 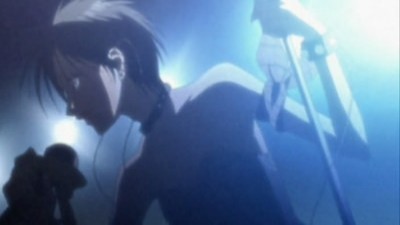 Komatsu Nana's past is brought to a conclusion and we now reveal the past of the "other" Nana. Oosaki Nana is the vocalist in a local band, the "Black Stones", but problems soon arise when one of the members announce their intention to leave for Tokyo to join another band. 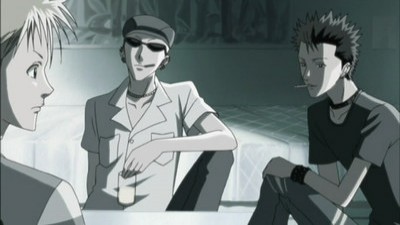 Ren has revealed that he will be moving to Tokyo to join the band "Trapnest". This leaves the rest of the band trying to decide what to do next, with Nana having to face the toughest decision of them all. Will she follow Ren to Tokyo, or remain behind to pursue her own dreams? 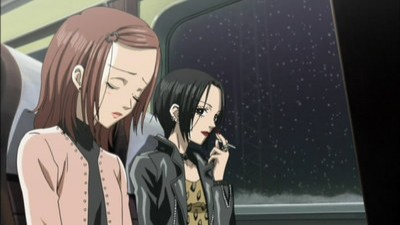 Snowing in Tokyo! Nana and NANA

Back in the present, Nana and Nana meet on the train to Tokyo. More detail is revealed around their meeting and events immediately after. 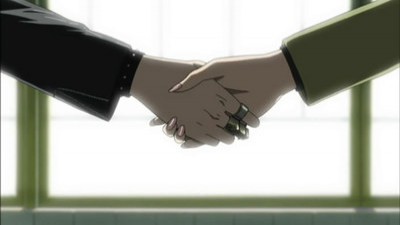 The two Nana's agree to share the apartment. Shoji and the others worry about Nana living alone with a total stranger. 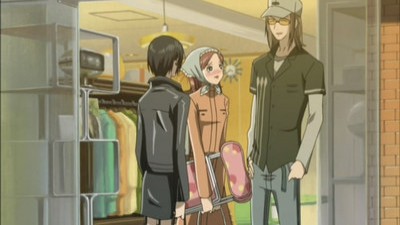 The two Nana's have now moved in together and decide to go shopping for furniture for the apartment. While talking, Oosaki Nana decides to nickname Komatsu Nana "Hachi" (eight) to make things less confusing. 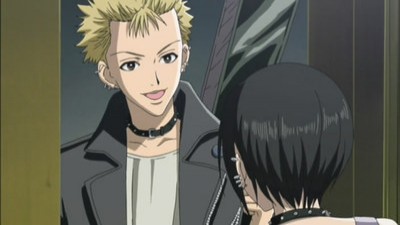 Nana and Hachi get settled into their new apartment. Hachi begins her new job. That night, they receive a visitor from Nana's old band back home. 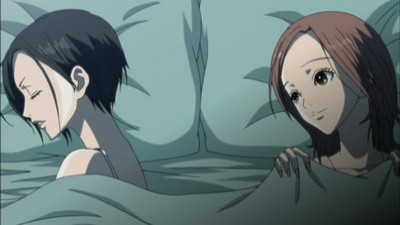 Nana and Nobu, along with Hachi, start their search for two more band members. Meanwhile, Shoji is asked to train a young girl named Sachiko. Hachi previously joked about Shoji having an affair with a woman named Sachiko, but this is just a coincidence, right?

Based on Ai Yazawa's classic josei manga, the anime version of Nana could not possibly be any better of an adaptation than it is. The characters are so realistic and life-like. They all have their motivations, and they are completely fleshed out. By the end of the series, you rejoice with their triumphs and weep for their sorrows. The cast of characters in this show is one of the best you will encounter in the josei genre, and their stories are not to be missed. However, it would be remiss to talk about this series and not mention the amazing work done by Madhouse. Animation is fluid, and the concert scenes really shine. There is also a lovely scene where Nana Osaki sings a haunting ballad in her bathtub that is one of the most poignant scenes I have ever seen in anime, and Madhouse does an excellent job of bringing it to life. The steam curls around the bathtub, and the fog blows across the river outside her apartment. It is quite a sight to behold. Additionally, the songs performed by Anna Tsuchiya and Olivia Lufkin really bring Nana Osaki and Reira to life. I cannot, and would not, want to imagine this show without them. They infuse it with life, and the soundtrack to this show is not to be missed. I cannot recommend this show enough. The characters latch onto your heart, and every time I think about this show, I experience the sweetest feeling of both melancholy and joy. I've never felt this way about another show. I doubt I ever will.

**Nana** is a romantic josei anime which is adaptation of the manga by Yazawa Ai who also wrote the manga of Paradise Kiss. It has music and comedy with a dramatic and tragic storyline. The way the comedy doesn't completely ruin the drama in the anime is just wonderful. It was produced by Madhouse Studios. It was also directed by Asaka Morio who also directed Chobits and Chiyahafuru. **Story:** The story is centered around two girls, both twenty, named Nana Osaki, who is going to Tokyo to become a musician, and Nana Komatsu (Hachi) who is going to Tokyo to meet with her boyfriend. However, things change as they get there, both Nana and Hachi finding difficulties in their lives and their friendship helps them cope. Although at the start, it may be a bit boring just go through with it and don't be intimidated by the 47 episodes as the series gets better and better. **Characters:** The characters are well developed through the series and there is a nice balance of back story and the suspension. The variety of characters we see give the anime more of a dimension and can grip and make us understand the anime more on an emotional basis. &gt;&gt; I'm going to ramble on a bit here so skip it if you <em>really </em>don't want to know more. *Why I really like Nana and Hachi, the two protagonists in the anime:* * \- the two different characters can let you relate to them easily * \- The two story lines that kind of interlink make it very enjoyable to watch; we also get a nice balance of backstory and what-going-to-happen-next with most of the characters. * \- And even if you find Hachi annoying sometimes, Nana, the beautiful and collected, can steal the spotlight and make the show better although I liked Hachi better at the end. *Other characters:* * \- The supporting characters all have something interesting about them and contribute to the story line and we get to understand them better. * \- We also get to see how the supporting characters go on with their lives even after they aren't really involved with Hachi, Nana and the main story of the anime which is nice because it gives it more depth and makes it so that it doesn't just revolve around Hachi and Nana. **Sound:** As Nana goes to Tokyo to be a musician, you can expect that the sound track will be better. And it is really good. Most of the music is punk and also you may go 'ugh', the songs are actually really good and really fit into the mood of the anime. Although I really like the first few OPs and EDs, I really just skipped the last few because I though they weren't as good. Also a bit of trivia, the singers for Nana and Reira (the singer for an opposing band) are also similar to them. **Animation:** The animation of Nana is really good, being similar to how it is drawn in the manga. The character designs are really good, suiting to what the character is actually like. The backgrounds are really nice as well. <strong>Overall, </strong>I really enjoyed Nana, really empathized and felt for the characters and really liked it.

there was a time in my life where i was going through some heavy issues and i must say this got me through it all. the music.... everything ! i loved this anime so much  all my close friends started calling me hachiko

If you want something diferent of the standar anime maybe you need see this for first and star my review we need talk about of the charcters Nana and Nana this are the perfect complement to each other, the comedy sentencies that make this are very funny. you don´t need to want a the joke be complete by the history this a been complete at the time. Now the plot, the drama in the story his amazing, when the anime need be mature does. drama and comedy don't overlap each other, althought sometimes the drama scenes are broken by a joke. In a moment of the story you star to ask you, why? the "why?" on the half onwards are the base of the drama, why if hurts you, you continue?, this is the question that you make to yourself from the beginning of the story, and in the half of the story the questions only increases, why you make this? why are you like? why? why? why? The arcs, are originals?, maybe if you don't are a frecuently consumer of romantic dramas, but this are a little cliche. the OST, come on, if you like the classic music and the punk you don't need ask you if you can enjoy the sound. Chacters, I don't see any deretype, most of the personalities are originals. the only bad thing is that the story is incomplete even after almost 50 episodies

Once in a while you stumble upon hidden gems in a magical world that is anime. It was during those moments when I felt adrift. Feeling betrayed by the reality that is life, I went on a sojourn to something that I can relate to. Such is the world of insights and epiphanies that the anime Nana opened for me. Being a slice of life anime, this series takes a realistic approach on its story line as well as each character's own predispositions and psychological underpinnings. This anime is so close to reality that it even underscores issues usually talked about in whispers in our society, from unconventional and frowned upon relationships to implied drug addiction. This series mirrors the many facets of love too. From unrequited love, to a complicated and tangled love affair to relationships with no closures at all. The characters will stay with you and this anime will leave an aftertaste on you even long after you're done watching the entirety of its episodes.

Start a new discussion for Nana anime. Please be fair to others, for the full rules do refer to the Discussion Rules page.