Meet Narue, an adorable schoolgirl with a secret. She's really an alien with powers right out of a sci-fi comic! But growing up is never easy, and sometimes it doesn't help when you're from outer space. Join our spunky heroine as she faces androids, alien invaders, and her first date with the boy next door. It's the sci-fi comedy that's a direct hit to your heart! (Source: Central Park Media)

All Narue no Sekai released episodes

My Girlfriend Is An Alien 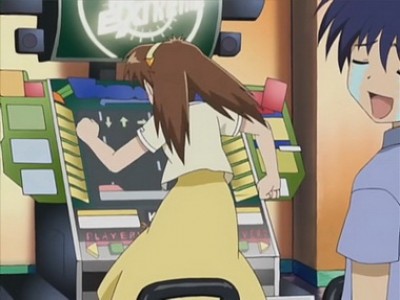 The Two's Secret Base

Love Has An Impact

A Message From Earth

A Starship In Love

Before i get into whether its a good show or not, there is one VERY important thing to mention: the voice acting. It isn't necessarily bad, its just Pokémon. Almost the entire cast of main characters shares their voices with a main character from the Pokemon TV show, Main Gril - Ash Best Friend - Gary/Prof Oak Sister - Misty Mom - Jessie Best Friend (gril), Maid, Dad, Main Character- Various voices ITS RIDICULOUS!! But this only matters if you watch it dubbed, like this reject. Iunno about how the subbed voices are but if you don't speak Japanese then you probably wont be able to recognize their voices in the first place. If you can get past the fact your watching Pokemon, its actually a pretty decent show for what you would expect, nothing amazing but it has its moments. There are also a couple of elements that set it apart from other, more generic romance shows. For one it's a middle school show, so its already different then most other shows in general. Second \*SPOILER FOR EP 1\* they actually date, like they are legitimately boy friend and girl friend and in ep 1 no less. So already it's got something going for it vs. other [slow](#) paced high school romance bullshit were it takes 12 eps for MC to realize "I like her, she likes me, lets go kiss and maybe go out.", or were MC is plastered in women and still can't pick the main one after 12-24 eps. Even tho it may look like and sound like a crappy show, its actually not bad. It is for a younger audience and it has some dumb shit about being friends and other generic middle school themes, but thats not to say there weren't parts i found to be great. There were basic eps like the Cooking ep, the Beach, ep but there were also parts that were genuinely funny and enjoyable to watch, not just because the voices were so recognizably. Overall, if you want the same idea as a romance show but with a different/less serious [execution](#) than how it is normally done, or you just want to watch Pokemon, then check it out and it could be just what your looking for.

Start a new discussion for Narue no Sekai anime. Please be fair to others, for the full rules do refer to the Discussion Rules page.