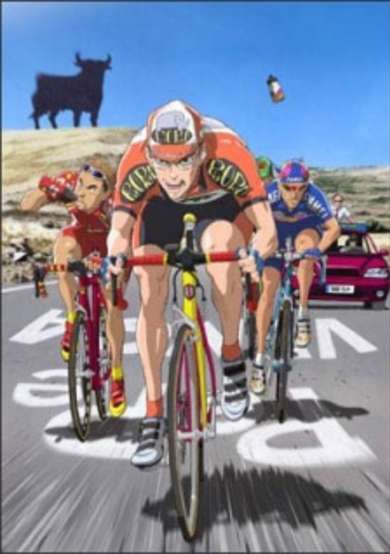 Pepe is a Spanish cyclist competing in an multi-stage Iberian cycling race similar to the Tour de France. He is a support rider for one of the teams competing in the race, and his role is to assist the team's top rider in winning the overall race. As the story unfolds, the racers are set to ride through Pepe's home town in Andalusia on the same day as the wedding of his elder brother Angel to his former girlfriend Carmen. Their relationship was a factor in his decision to leave the town to pursue professional cycling, and the wedding is a frustrating reminder that his career hasn't turned out as he would have liked. Now, with the sponsor planning to drop him from the team and his family and friends cheering him on, Pepe abandons his assigned role and strives for glory. (Source: ANN)
User Count966
Favorites Count3
Start Date26th Jul 2003
Next ReleaseInvalid date
Popularity Rank4871
Rating Rank4040
Age RatingPG
Age Rating GuideTeens 13 or older
Subtypemovie
Statusfinished

This is a fairly short movie about a guy in a cycling race. Don’t let that put you off if you have no interest in the sport, i have watched many series or movies based on a sport i barely know the rules off so when i watched this i went into hoping to gain even a little knowledge of cycling races and i did. Due to its short length it doesn’t go into depth about any rules but a couple manoeuvres the cyclists use are described and it all just adds to the experience.Pepe out main character is part of a team that don’t exactly want him any more as he hasn’t performed and are close to firing him spurring him to fight all the way to the end. It’s his home town so there are a lot of supporters cheering him on. His brother is getting married to his ex girlfriend, its stated in the synopsis its his ex but it really only hints at it but its enough to pick up on.It seems to be based in Spain which is rather unique setting. A lot of it takes place on the road as we follow Pepe in an open almost desert like place and an old pub restaurant place.The art and animation are brilliant, the characters are always well animated and even when the large group of cyclists are on screen it never lets up and doesn’t resort to using still frames which i believe is often lazy so having great animation helped here. Backgrounds are really well drawn even if not a lot is going on due to the desert like setting, crowds and characters designs are simple but work well.Sound is another great part, the background music fits perfectly with the accompanying scene and fit perfectly well with the Spanish setting, they use a very Spanish sounding tune, you know the type that is played on acoustic guitars really fast (Flamenco?) im no expert so please excuse me. It just fits perfect as the movie draws towards its climax. Voice actors did a perfect job, i felt everyone did a good job and the acting wasn’t wooden due to a decent script.Characters are fairly likable. Pepe, although not shown is a struggling professional cyclist, or at least that’s what we can summarize from the fact the sponsor wants to fire him if he can’t do well in this race, he has a past with his brothers new wife and doesn’t seem to happy to see them together but its never played for the drama but used to show how he’s grown. Pepe’s brother seems to have no remorse over ‘stealing’ Carmen his wife but does want Pepe to succeed and always had faith in him. The old man who owns the pub is cool and generally gets everyone in high spirits and is the party maker for a lack of a better description. Everyone else had individual personalities, the guy who works at the pub, the team manager, the sponsor, guy in the wheel chair. They all make up a nice and enjoyable cast of characters.Nasu is a really enjoyable movie that will have you pumping with excitement as the race end draws closer, his story is well told and we learn plenty despite the short running time and you may even pick up a few cycling rules or even make you want to pick up your bike. Its not a comedy buts its also not a drama and is very light hearted, the doping test is hilarious.

Start a new discussion for Nasu: Andalusia no Natsu anime. Please be fair to others, for the full rules do refer to the Discussion Rules page.