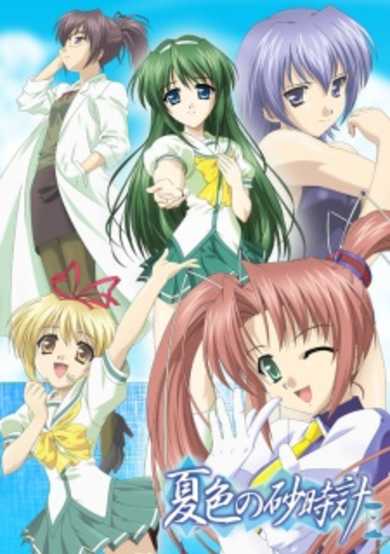 Makimura Koutarou has made up his mind: during the summer vacation, he is going to confess his love to the seemingly unapproachable Serizawa Kaho. Yet, on the night before, he has a run-in with a strange girl - an encounter which propels him into the future. There, he learns that not only has Kaho-chan become his girlfriend, but she has also died in a tragic accident. Returning to his own time, Koutarou sets out to change the future and save his love. (Source: ANN)
User Count799
Favorites Count0
Start Date21st May 2004
Next ReleaseInvalid date
Popularity Rank5214
Rating Rank6891
Age RatingPG
Age Rating GuideTeens 13 or older
SubtypeOVA
Statusfinished

All Natsu-iro no Sunadokei released episodes

Yeah~ I gave this a 10 ^^ I haven't played the game so I don't know if this OVA does it justice or not, but I enjoyed it anyway.StoryI've never seen anything quite like it. I will not go into what the story is about because it's in the summary up at the top, but it's very different from all those other 2-3 episode long OVAs out there. It is beautiful and different and is very well presented, even though there was only 2 episodes to work with. If it were to become a proper TV series then I'm sure it would be popular :3AnimationNot particularly outstanding. Like most other short OVAs it had rather beautiful art, but it wasn't that amazing. Some of the characters could have done with a bit more detail here and there to make them pretty much perfect.SoundThe opening song is by Nana Mizuki, and I know this is slightly biased but that automatically made me give the sound a 8/10. My score was then pushed up to a 9/10 because the OP and ED are beautiful, and I know I say this in every review, but they fit so well with the series. They really did.CharacterNot enough character development for some of the characters. However, the main couple and Ai were filled out nicely and weren't boring standard 2D characters. They had a personality and were different from the other usual OVA characters. Nicely done development for those two, but not really for anyone else unfortunately. If there had been more episodes then I'm sure all the characters' personalities would have filled out more.EnjoymentI always skim-watch through short OVAs like these because I just know they're going to be a repeat of all the others and will be boring. This one, however, is a stand-alone decent OVA. It kept me interested the entire time and I didn't keep looking at how long it had left, thinking "just hurry up and end". I was really sad when it finished and I wanted more! Absolutely loved it ♥

Start a new discussion for Natsu-iro no Sunadokei anime. Please be fair to others, for the full rules do refer to the Discussion Rules page.