A remake of the Negima anime with its own original story. Wizard Negi Springfield may be a boy, but he has a man-sized job to do! Fresh from the Academy of Magic, Negi continues his training as an instructor at Mahora Academy in Japan. But before he can get his Masters in magic, the 31 schoolgirls of Class 3-A are gonna keep him up all night cramming for a final exam in will power. Temptation aside, Negi has more on his syllabus than flirting and spells. Darkness is closing in, and Negi is gonna need help from his lovely student bodies to drive the ghouls from their school. These girls want to prove that they're the best in class, and extra credit is available to the cuties that aren't afraid of after-hours phantom fighting! (Source: DVD case) 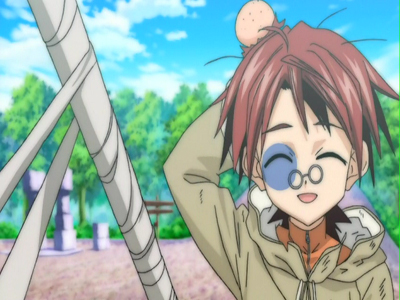 What! 31 students right off the bat?!

Negi Springfield starts his first day as a teacher of an all-girls middle school class in this series remake. The girls are introduced, and some background is given about Negi's father and Evangeline. 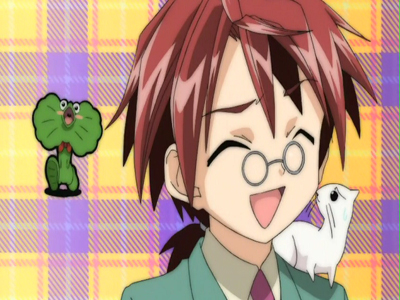 No way! That's what you do for a probationary contract?!

Asuna confronts Negi about his magic and learns about the basics of a Provisional Contract, while more of Evangeline's past and purposes are explained. Meanwhile, Class 2-A discusses the mysteries behind the vampire attacks without any clue to who (or what) it could be. 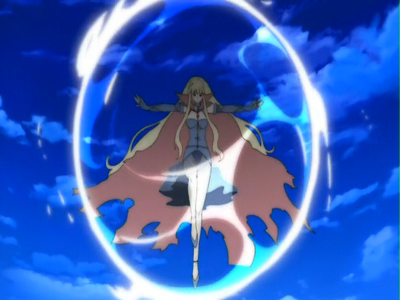 Oh-ho, so that's how a probationary contract card is used.

With the full moon, Evangeline has enough power to force a showdown with Negi. As Negi gets pursued by Evangeline, Asuna agrees to help Negi out by using the Pactio, but that means she will have to kiss him! Will that be enough to withstand Evangeline's attacks? 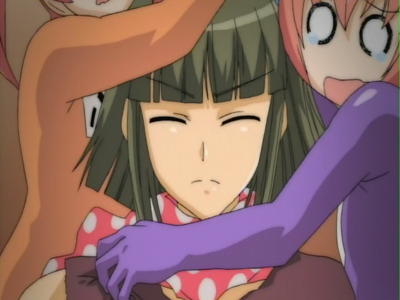 Negi helps Takahata investigate some mysterious phonomena in the form of dark clusters on campus. Asuna hosts the inaugural meeting of the Chupacabra Research Group as she and the girls search for the evasive creature. Meanwhile, two spirits from the Magic Academy arrive with some news about a missing Star Crystal, but they also plan to watch that Negi doesn't use magic in front of the girls! 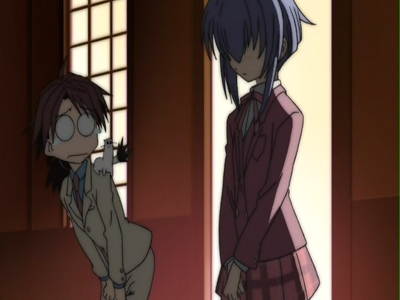 Security deposits and key fees are expensive in Tokyo. Wait, that's not what the probationary contract's about!

Negi explains his situation to Nodoka and she agrees to form a pactio with him. Asuna sets up another hunt for the chupacabra, while Konoka skips out to attend the Astronomy / Fortune Telling Club. But the dark fairy’s magic is still at large and somehow Konoka and Setsuna become entangled in the mess! 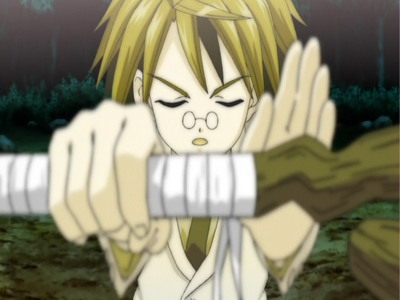 Pardon me. Might I not be excused with either the forehead or cheek?

The evil fairy has transported Negi and the girls to another dimension to do battle, but this time the fairy has taken control over three of their classmates. Negi pulls cards for Asuna, Nodoka, and Konoka, but in order to increase his chances for success he may have to resort to kissing the proud but unwilling bodyguard, Setsuna! Negi tries out his magic that allows him to see spirits and make visual contact with Sayo Aisaka the ghost girl. While Asuna tries to sell her Chupacabra T-shirts to her fellow students, Sayo starts wandering into the girls' dorm and visits all the rooms, causing all sorts of paranormal activites to happen. Kazumi of the Journalism Club intends on exposing the secret, while Negi tries to catch Sayo without revealing his own secret. 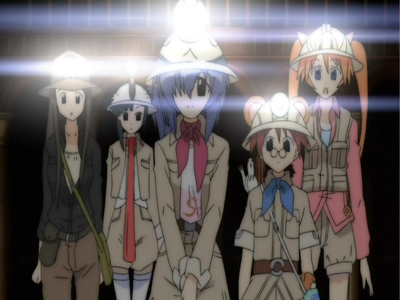 The Narutaki Twins try to prove to everyone that they are adult-like rather than children. Meanwhile Negi and his partners go to Library Island to research a gem left behind from the fairy incident. Negi and his partners go camping to train in magic and to prepare for new threats. 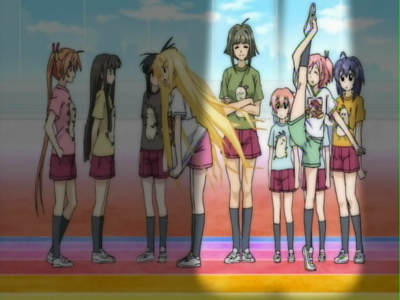 Professor Negi went behind my back?! I shall never condone such a thing!

Ayaka wonders whats up with the chupa team and why she wasn't invited to go camping with them. Meanwhile, the fairy takes control of 4 students to finish off Negi and his partners for good.

Whether you watch this subbed or dubbed you are really going to enjoy this remake of Negima!. Without getting to much into detail the original anime adaptation of Negima! sucked to no living hell, it was awful even for someone who doesn't really care about much when it comes to plot, characters, and animation when it comes to harem anime (all characters have a generic archetype). Also getting passed the fact that the main hero of the story is a 10 year old boy, you would find this a very entertaining series. The series follows our young main character Negi in his quest to become the next magister magi in order to find his father. Being smart and graduating from the Magic Academy in Wales, United Kingdom. He is sent on the final quest for graduation where he is to become a teacher in an All-girls Middle School in Japan. Did I mention he is 10 year old. Lucky bastard. Animation was made by studio Xebec in cooperation with studio Shaft (did animation for Monogatari series). They did magic. The animation was one the highlights of Negima!? and made it really interesting when i.e Asuna's hair would stand up. Sound. Honestly the voice acting of the series made this golden. The characters whether it be dub (Funimation) or sub they did magic and were in sync with character personalities. Soundtrack was good. Characters. General archetype characters with slight modifications. All of the characters are likable in someway which made this one of my favorite series. ANIMATION SECTION: 9/10 ART SECTION: 10/10 Analysis: General Artwork 2/2, Character Figures 2/2, Backgrounds 2/2, Animation 2/2, Visual Effects 2/2 SOUND SECTION: 6/10 Analysis: Voice Acting 3/3, Music Themes 2/4, Sound Effects 2/3 STORY SECTION: 6/10 Analysis: Premise 1/2, Pacing 2/2, Complexity 1/2, Plausibility 0/2, Conclusion 2/2 CHARACTER SECTION: 4/10 Analysis: Presence 2/3, Personality 2/3, Development 1/3 VALUE SECTION: 7/10 Analysis: Rewatchability 3/5, Memorability 4/5 ENJOYMENT SECTION: 10/10 Analysis: Art 1/1, Sound 2/2, Harem Story 3/3, Harem Characters 4/4 VERDICT: 8/10

Start a new discussion for Negima!? anime. Please be fair to others, for the full rules do refer to the Discussion Rules page.