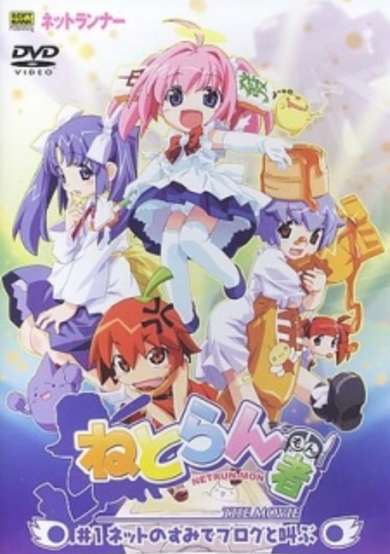 All Netrun-mon the Movie released episodes

Netrun-mon the Movie is about a couple of character that get taken to a world called The Net Characters World where they meet some interesting people who befriend them, the story can be summed up as a rescue mission where one of the two protagonist gets captured and the older brother rescues her. The beginning when the two duck like characters appeared some what reminded me of the Elves and the Shoemaker by The Brother Grimm where they appear and start helping the computer company.The net Characters World at some points to be very ordinary just like our world but then can quickly go to some fantastical area where there are giant towers and dragons.The art is nothing special, it fit the type of show perfectly, each character was well drawn and animated well with a few still scene but its nothing bad, background art was simple but detail wasn’t required for such a small OAV.The voice actors did an ok job, the ducks sounded fine and because the characters in this show are made out to be small cute people they had overely squeaky voices that are not annoying and some may consider them cute, background music is pretty standard, kind of reminded me of music you here on game consoles, simple keyboard tunes. the ending is a nice slowish ballard pop song that is realy nicely sung.The character make this a lot more of an interesting show, the hero of our story is a duck like creature that comes to the world with his sister and appear to be partners in whatever they do, Chiyu is a girl who drags them in and is genrally the character that gives out the information and calls herself (though im unsure if the other characters are)a Computer Sprite. There was also a small blob like creature who was smoking which i found to be quite funny, the character receive help from two human looking guys, a samurai and a guy who seems to not care about anything and genrally unmotivated, the others seem to be there just to add extra cuteness and give a reason for the hero to fight on level terms with the big bad called Master and his minions. There was also a random girl who appeared when a door was opened just sitting there on the toilet and i thought it was hilariously random.Overall it is an OAV that is worth checking out, it combines fantasy and mahou shoujo and plenty of comedy, though won’t have you laughing your ass off which make you smile and chuckle, there is also a little toilet humor thrown in (the weapon that apears on the crotch) at 29 minutes long it is by no means a waste of time.

Start a new discussion for Netrun-mon the Movie anime. Please be fair to others, for the full rules do refer to the Discussion Rules page.