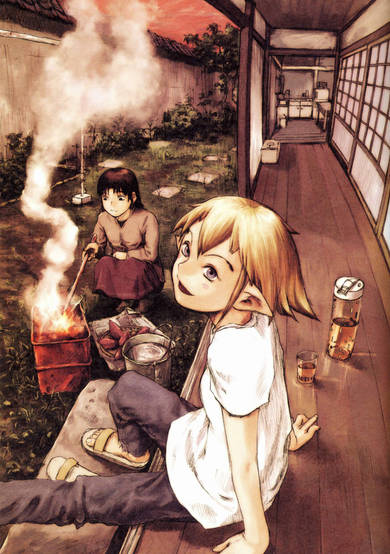 In the 21st century, aliens have arrived on Earth and live among humans. In sleepy Enohana, the dirt-poor student Chigasaki Mayuko finds herself living together with NieA, a low-caste ("Under Seven") alien. While Mayuko struggles diligently to make ends meet, NieA seems to be totally unconcerned with the consequences of her actions. As the odd couple throws off the expected sparks, the wrecked alien mothership looms in the background... (Source: ANN)
User Count3300
Favorites Count13
Start Date26th Apr 2000
Next ReleaseInvalid date
Popularity Rank2652
Rating Rank5899
Age RatingPG
Age Rating GuideTeens 13 or older
SubtypeTV
Statusfinished

All NieA Under 7 released episodes 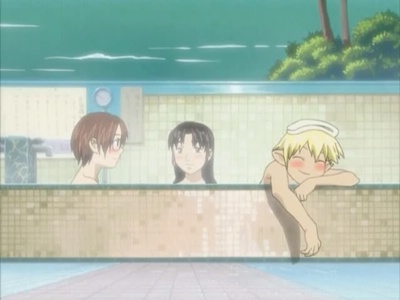 Mayuko is living in a bath house and going to cram school until she can afford to pay her way to college. NieA is an alien living in her closet who likes to build UFO's in her room. Many years ago, an alien ship landed and it's inhabitants integrated into Japanese society. Mayuko has little money and almost no food while NieA is a freeloader. At school Mayuko meets an old classmate named Chiaki who wants to come to her house and see the UFO. Embarrassed about her bad living state and roommate, she is reluctant. Her feelings are confirmed when NieA launches her UFO right through the roof. 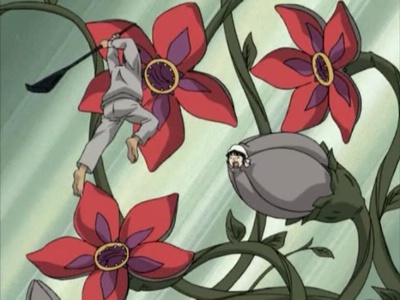 Needing to do something to help the bath house get back in the black, Mayuko, Nenji and NieA go to the crater in search of an oil that rumor has it exists there. Along the way, the group are attacked by giant plants and they lose their Bento lunches. When they return, they use the oil for the furnace and mix in some dead plants to cause a nice aroma. All is well until the plants start growing. 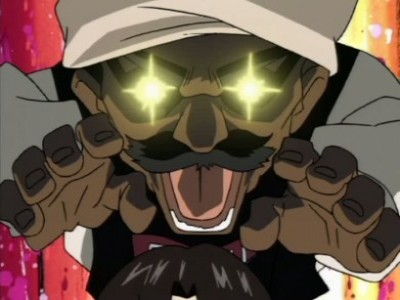 Mayuko is greeted by a large Indian man who seems to be a pervert. NieA recognizes him as the owner of a convenience store as an alien. He invites Mayuko there for their opening and then invites NieA to the alien meeting. NieA ends up going to the meeting with the promise of free Bento. The meeting ends up being between about five aliens with Chada being the most outspoken one of the group. Of course, this leads her and NieA to blows and the meeting comes to an end. 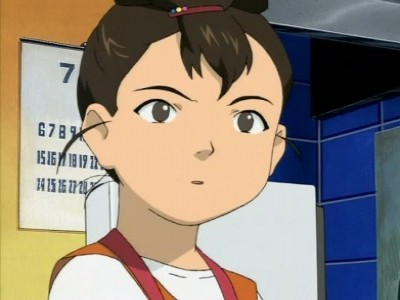 Mayuko has started a new job at a European resturant where she delivers food (although she tells Chiaki that she's a waitress). After NieA has stuck Chada with a food bill at the resturaunt she works at, Chada pays a visit to the resturant. Mayuko runs a delivery when Genzo shows up looking for her so that he can give her some rice. When NieA come in, she and Chada start to fight again. What else can go wrong for Mayuko? 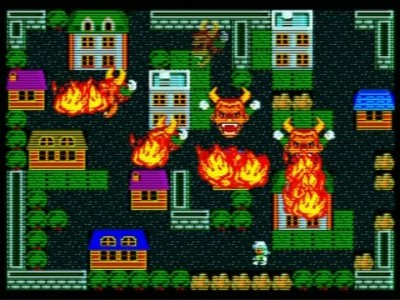 Still in the red, the Enohana Bath house must do something to bring in customers. When NieA waltzes in with several parts from a video game store that has closed down, Kotomi (the owner and manager of the bath house) has an idea on how to get more customers. They advertise a game day with the customers playing against the employees - the winner gets a year of free baths. 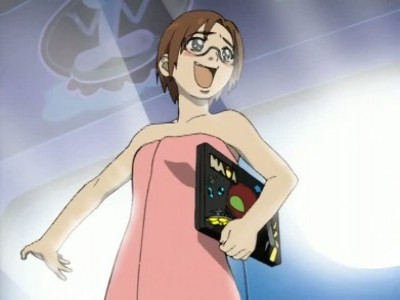 When a new bath house opens in the crater, Kotomi asks NieA and Mayuko to investigate. Since they can't go inside or they'll be recognized, they enlist Genzo and Chiaki to help get intel from the inside. Outside the new bath house, Mayuko finds some intersting leaves that they are using in the bath house. Suddenly the back door opens and out walks Kaana, the Indian alien, and confronts them as the owner of the new bath house. Mayuko runs off with NieA in tow. Later at the Enohana Bath House, Genzo and Chiaki come back and are acting very strange. The group discover that the strange leaves Mayuko found are an illegal substance and the cops come to shut down the new bath house. 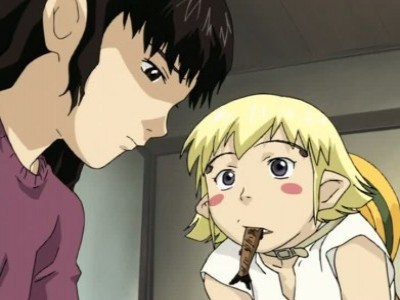 Chiaki asks Mayuko to go to a Go-Con with her. A Go-Con is a blind date with several guys and several girls in hopes that some of them can pair off. Chiaki reluctantly agrees. Meanwhile, NieA is building a new UFO on the roof when she picks up a signal through her radio. This had happened once before but now is much stronger and appears to be coming from the mother ship. After worrying about what to wear and her hair that need cutting, Mayuko calls Chiaki and tells her that she can't go to the Go-Con after all. Mayuko is feeling down about how she yelled at NieA and skipped out on the the Go-Con. Later at cram school, she runs in to the group of girls that went to the Go-Con and they let her know that everything is okay with them about her cancelling. Meanwhile NieA goes to another alien meeting and has another fight with Karna. Mayuko, feeling better about things spends the rest of her money on a meal for her and NieA. Not everything goes as planned, however, when NieA comes home full from the alien meeting. 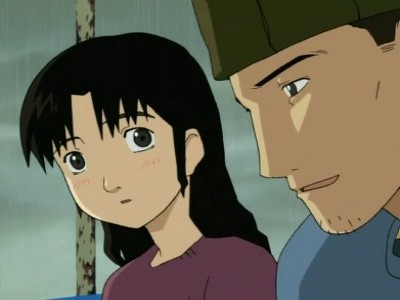 Close Encounter & After the Rain Bath

Mayuko is still upset with NieA's behavior while NieA decides that Mayuko's mood is caused by malnutrition. She heads to the junk yard to sell scap in order to buy her more nutritional food. When the junk man refuses her prices he suggests that she try a restricted area. When NieA goes there she receives a very strong signal from the mothership. Genzo shows up with more rice and he and Mayuko start talking about their childhood times together. Genzo asks if Mayuko still writes the stories that she used to tell him when he was depressed. Later NieA shows up with a nutritional meal for Mayuko - but she's been duped into buying a model instead. 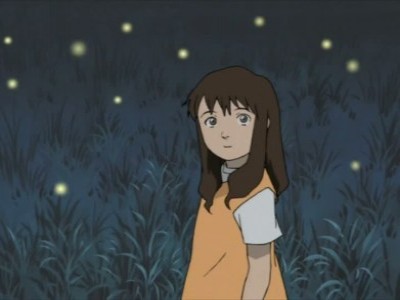 Glow of the Firefly & Nocturne Bath

When the resturaunt that Mayuko works at gets a large party reservation, Mayuko goes to the supermarket for ingredients. Chie goes with her which turns out to be fortunate since Mayuko has never been inside a supermarket before. After the party leaves the resturaunt, Chie sees fireflies for the first time and her father tells he about how Enohana used to be known for them - so to speak. NieA still tries to figure out what the mothership means by the "sayonara" signal she picked up.

Back when I first watched "NieA Under 7" quite a few years ago, I thought it was a rather odd show that contained some comedy but not much else. Thinking back on it, I now realise that this show is probably better described as a slice of life. And by that I mean it's a REAL slice of life, not one of those fake ones like "Clannad" that people slap the genre label onto just because it doesn't contain mecha and it's set in a school. "NieA Under 7" contains all the telling signs of a slice of life - even though it's undoubtedly a comedy, it's not constantly cracking jokes like in "Galaxy Angel", and when they're not doing comedy, they're doing... well, nothing really. You could call it drama, but it's not very dramatic. The storyline meanders around and doesn't really get anywhere, so yeah, pretty close to your standard definition of a slice of life.The comedy side of "NieA Under 7" does not really appeal to me. It's the typical slapstick, random, over the top humour so characteristic of anime in general. The only thing I remember being amused about is the video game tournament in episode 5... and I guess that probably has something to do with the premises being appealing to me. As anyone can tell you, the key to a slice of life is the cast, so it's fortunate that the "NieA Under 7" has quite a good one that offsets the not-very-funny comedy. The characters are likeable, especially the central character Mayuko. I later found out that she's voiced by Ayako Kawasumi, who happens to be my favourite voice actress (she voiced Lafiel from "Crest of the Stars", Nodame from "Nodame Cantabile" and Fuu from "Samurai Champloo" amongst many other roles). What annoys me though, is that she has these tendencies to suddenly explode as the show goes into comedy mode, which seems very out of character as she's supposed to be a really shy girl. Other characters like the Indian guy also have these crazy sides to them that just seem to be there for comedy value, and I don't really like the fact they sacrificed good characterisation for the sake of comedy, which really isn't that funny.The ending isn't much of an ending as absolutely nothing is concluded. But then again, after watching the previous episodes, I wasn't really expecting much of an ending, and so wasn't really surprised when there was none. I noted two things about the music of the show. The first one is that the ending theme, which I quite like, suits the anime pretty perfectly - quiet, charming, with no notable features but not bland either. Second thing I noted is that the opening theme absolutely sucked. The hideous vocals made it sounded like they pulled some old tramp off the street to sing it.Overall, "NieA Under 7" is a bit boring and not very funny, but despite this, I don't feel particularly negative towards it. It's probably because the show and its characters possess a kind of quiet charm (when they're not too busy being silly) that I found appealing. The result is a show that, while not exactly engaging, is not a burden to watch either. So I feel kind of neutral towards "NieA Under 7", and in fact my feelings towards it is so neutral that I can't think of many shows that I feel more netural about.

Start a new discussion for NieA Under 7 anime. Please be fair to others, for the full rules do refer to the Discussion Rules page.