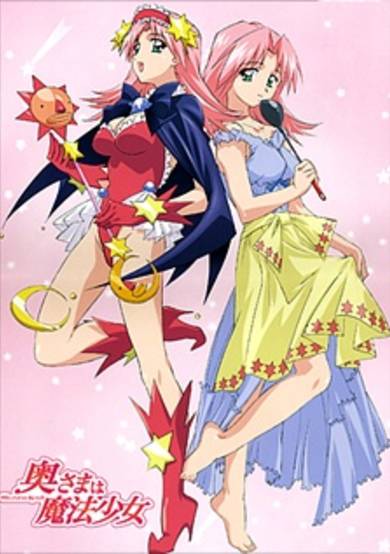 Ureshiko Asaba, 26 years old, married. Few people know the fact that she is a magical girl named "Agnes", and she is actually the guardian of the town where she lives. One day she meets Sayaka Kurenai, aka "Cruje", another magical girl appointed by the magic realm as the legitimate sucessor to her position, but Agnes is reluctant in letting her assume because she knows that Cruje has orders to erase the whole place, including its human inhabitants with the purpose of creating a new one. To complicate matters, Ureshiko must deal with the growing distance between her and her husband, Tamotsu, her crescent feelings for Tatsumi Kagura, a young man who is now living as a tenant in her home, and the fact that in the moment she ever kisses a common human, she would lose her powers forever. (Source: ANN)
User Count810
Favorites Count0
Start Date4th Jul 2005
Next ReleaseInvalid date
Popularity Rank5192
Rating Rank7121
Age RatingPG
Age Rating GuideTeens 13 or older
SubtypeTV
Statusfinished

No Kiss, You See

Stew is Okay, You See

Adults Are Children, You See

An Evening Shower is Dangerous, You See

Adults Are Okay, You See

The Charms of Adults Are, You See

The Kiss Right in Front of Me, You See

The Existence of a Dear Person, You See

So I Have No Regrets, You See

To Open My Mind, You See

Start a new discussion for Okusama wa Mahou Shoujo anime. Please be fair to others, for the full rules do refer to the Discussion Rules page.