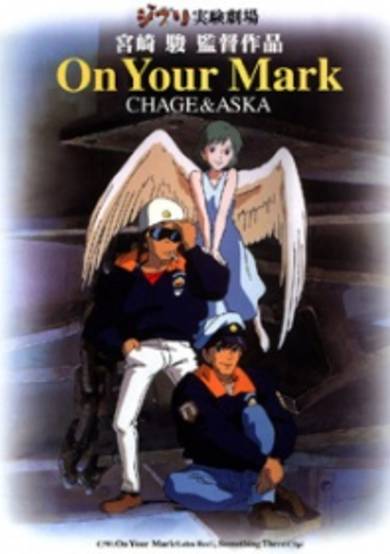 In the future, mankind can no longer live on the ground due to intense radiation, both from the sun and from an abandoned nuclear plant. One day, a group of special police raided a religious cult compound, and after a fierce firefight two policemen found a winged mutant girl, with chains on her arms, barely alive. However, government scientists dressed in hazardous material suits immediately intervened and brought her back to a research facility. Realizing they were merely transferring her from one prison to another, those two policemen formulated a daring plan to set her free once and for all. (Source: ANN) This is a music video created by Hayao Miyazaki for the pop music duo Chage &amp; Aska (after whom the two police officers are modeled).
User Count2359
Favorites Count13
Start Date15th Jul 1995
Next ReleaseInvalid date
Popularity Rank3222
Rating Rank2919
Age RatingG
Age Rating GuideAll Ages
Subtypemusic
Statusfinished

All On Your Mark released episodes

I was surprised to find a 7 minute OVA that had a rating that defied its length, and so I decided to check it out. My skepticism melted as the fantastic music from the opening caught my ear... but then it soon returned as the anime skipped from scene to scene, almost like a preview of a proper show. With the sheer number of different scenes crammed into a space of 6-7 minutes, "On Your Mark" barely even comes across as being coherent. I'm not even sure the story was told in a linear way. Because of the extremely small amount of story revealed, this anime feels more like a music video. This impression is reinforced by the fact that there is no dialogue and the background music is a single song played from beginning to end.On your mark is directed by Miyazaki. But if I even if I didn't know that, I would have guessed from the animation style, especially since the girl in it looks just like Nausicaa... and Kiki.... and that girl from Laputa etc. I can't help feeling that people are giving "On Your Mark" high ratings simply because of the Miyazaki stamp on it. I mean, come on, this isn't that great at all. It makes an OK music video, but it doesn't even function as a show!\*\*\*Or at least that was the review I was going to write initially, and I was gonna give it rather low score. But as I was about to post this review, the description given on the front page caught my eye, and everything clicked - this IS a music video!!! From what I can tell, it was made for some Japanese pop duo, presumably for a single they were releasing. And so I rewatched it as a music video. But that didn't completely work out either. The problem is that all through the song, things are happening in rapid succession on screen... and the sounds from events are all clearly audible, trampling across the song and reducing it as the main focus of the video - I've never seen a music video that interfered with the song to this extent before!. The whole thing ends up feeling more like a montage scene from a movie than a proper music video. And so I am left puzzled. It's supposed to be a music video - it's even got the name of the song artist in the opening - but it doesn't quite work as a music video if you watch it like one. An even more important question (at least to me) would be: how the heck do I rate this?? Given this was meant to be a music video, it would probably be unfair for me to rate this purely as a "proper" show. But I can't conscientiously give this a high rating either (and I still think people are rating this with a healthy amount of "Miyazaki premium" ). So in the end, I decided to just take the average of the rating in each categories and leave it at that. Problem solved! :P

I would just like to point out this is NOT an OVA. It's a music video.  I'm not going to review this but I will give my score on Story/Animation/Sound/Character/Enjoyment/Overall as you do but obviously this will differ than watching an anime because it's only a music video. So don't go in expecting much. But if you enjoy Ghibli's work and Japanese music, then I would recommend you see a piece of Studio Ghibli's works.

Start a new discussion for On Your Mark anime. Please be fair to others, for the full rules do refer to the Discussion Rules page.