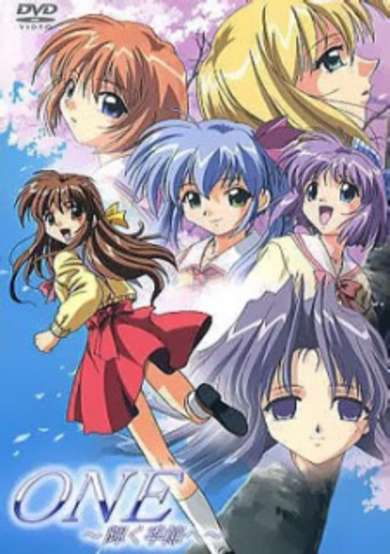 Orihara Kouhei returns to his town after a long disappearance to fullfil the promises he made to several girls in his childhood. He suffered from memory loss, and carries a tragic past. An strange ambience surrounds the OVA...It's almost like a dream, like memories from the past trying to come together in one piece but without being able to... (Source: ANN)
User Count432
Favorites Count0
Start Date10th Aug 2001
Next ReleaseInvalid date
Popularity Rank6758
Rating Rank10922
Age RatingPG
Age Rating GuideTeens 13 or older
SubtypeOVA
Statusfinished

"One Kagayaku Kisetsu e" (henceforth to be refereed to by "One") is a 4 episode OVA series, realised in 2001, based off a visual novel by the same name. "One" was produced by "KSS"whose only notable works are "Golden Boy" and "Naruto Shippuden", so take that as you will. The original visual novel was created by "Tactics" who's core team went on to form "Key" and produce well known visual novels like "Air" and "Clannad". <u>Story</u> I'm not sure if the story is just badly explained or its badly translated, but Unless you've already played the visual novel the story does not make make much sense and is general rushed even by the end there are still plenty of gaps that you have to try to fill in yourself. The main premise is that each episode follows 1 or 2 girls in a high school as they interact with the male semi-protagonist, who has a server case of multiple personality disorder and memory issues coursed from a traumatic experience in his past. <u>Animation/Art</u> The animation quality for “One” was mediocre at best back in 2001 and it has not aged at all well, the character movements feel stiff and when they walk they appear to float along the ground or have the background move rather than them. The background art is mostly flat and washed-out with little to stand out, however they do a good job of convey weather and/or seasons. <u>Sound</u> The sound is the highlight of “One”, having different instrumental soundtracks for each episode that predominantly use the instrument that the protagonist plays in the episode as well as matching the weather/season of the episode, this helps to build an atmosphere. The show is only in sub, but the Japanese voice actors do a satisfactory job. <u>Characters</u> Kōhei Orihara – The main male semi-protagonist is a withdrawn,mentally secluded highschooler who has a talent for play musical instalments and wants to help the girls he meets, but that’s made difficult by him alternate persona and the fact they start to forget him. There are 7 girls in the story all off which are done reasonable well not falling to much into anime stereotypes,although none of them really stand out to be worthy off note over the others partially due to not enough screen time in only 4 episodes. <u>Conculsion</u> Do I recommend “One”? - no, watch “Kanon 2006” or “ef tale of memory's” instead both have similar themes but done much better.

Start a new discussion for One: Kagayaku Kisetsu e anime. Please be fair to others, for the full rules do refer to the Discussion Rules page.