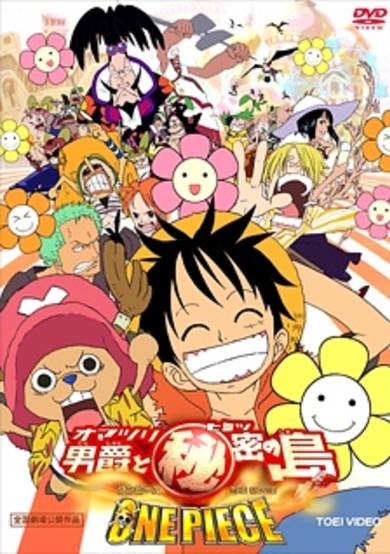 The Straw Hat crew obtain an advertisement for a recreational island on the Grand Line run by the Baron Omatsuri. Luffy decides to take this opportunity to kick back and relax. Unfortunately, when they arrive at the island, they are asked to compete in contests through unity for access to relaxation. However, there seems to be a mysterious air on the island, as the Straw Hat Pirates begin to fight amongst themselves, while Robin, Chopper, and Luffy individually search for the secret behind Baron Omatsuri's island. (Source: ANN)
User Count5893
Favorites Count37
Start Date5th Mar 2005
Next ReleaseInvalid date
Popularity Rank1829
Rating Rank1353
Age RatingPG
Age Rating GuideTeens 13 or older
Subtypemovie
Statusfinished

All One Piece Movie 6: Omatsuri Danshaku to Himitsu no Shima released episodes

So this will be my first written review for and anime so to save me rambling ill keep it short but give you enough information to decide if this is for you. If you are reading this review then you obviously know what one piece is though if for some odd reason you don't, let me fill you in. One piece is a long running anime about a group of pirates of all kinds each wanting to complete there own goal in life with the big/main goal being to find One piece, The greatest treasure in the world at least as far as we know it is. It is a great show with some fantastic arcs but its a very "lighthearted" series for the most part, don't get me wrong its not a kids show but its still meant to entertain rather then to well in some ways... creep people out, then one piece movie 6 came out One piece movie 6 follows the crew as they are invited to and island to play a game which is said to test the power of your nakama (friends/crew) And luffy having a amazing trust in his nakama is ready to do it despite his crew not being so eager. They participate in the games the Baron hosts and things go smoothly and it seems to just be another generic anime movie spawned from a show.. all show we think. To avoid spoilers i won't go into much detail but this happy entertaining island is not what it seems. Crew members disappear, the baron has a hidden past. and everything seems to be a little too mysterious. The thing thats amazing about one piece movie 6 is how dark it is. Where popular anime's like these, one piece, naruto, bleach all teach you to believe in your friends teamwork can overcome anything. This movie is designed to break that. Tear apart your Nakama break your bonds and see just what lengths the protagonist will go too to save his friends I would love to go into more detail about the plot but in doing so it would take away from the surprise people would get from it so ill end with this. If your going into this expecting a typical shounen movie.. you will be surprised. If you go into this expecting a happy go lucky film.. you will be surprised. One piece movie 6 is a dark, dark film. Tear away everything the main character loves and what left that is what one piece movie 6 wants to show you and that is what it does. One piece movie 6 is to me what the Disappearance of haruhi suzumiya is to the melancholy of haruhi suzumiya. The series its spawned from is great but the movie is just amazing i would love to talk more about the plot but the less detail i go into about it the better. One piece movie 6 is and outstanding film and my personal favourite anime movie. If you a fan of one piece i recommend you all to watch it just be prepared for it to be darker then usual, If you are a fan of Dark anime movies/show i highly recommend it only problem would be is that you wouldn't have as much as a connection to it if you haven't watched one piece and there for wouldn't really care for the characters Either way i love this movie, If you ever wanted to see a dark take on one piece then this is your greatest option.

I really did not enjoy this movie. As far as the story goes, the first half if typical Straw Hat shenanigans, but then the second half takes a sharp turn into the dark. It gets pretty damn dark, but dark does not necessarily mean good. The dark atmosphere of this movie does NOT fit One Piece at all. The show has always had a bit of a serious side to it, but it's always been primarily a light hearted adventure. This kind of story in the second half would have fit much better as a Bleach movie or something. As far as the sound goes, the voice acting is what you'd expect from One Piece, it's pretty good. But the music on the other hand is not very memorable at all, I watched this movie the day before I wrote this review, and I do not remember a single piece of music. So as far as the sound goes, it's okay, but the music drags it down. With the characters, the Straw Hats are just as fun as always, there's no drastic change in the characters, and I mean that in the best way, the Straw Hats are pretty much perfect as they are in my opinion. But everyone else in this movie did not impress me very much at all. There was not nearly enough time spent on character development for the main villain, that leave it for a scene that is roughly one minute long and does a very poor job of making you understand why he did what he did, and overall, as far as One Piece villains go, Baron is one of the worst I've seen next to Hody from Fishman Island. As far as the side characters go, they are extremely forgettable, and very uninteresting. And now for the big one: The animation. This animation is awful. It is incredibly inconsistent with well drawn backgrounds a lot of the time, but the actual characters are poorly drawn, with strange and inconsistent movement. The only exception would be the final (And, really, only) fight in the movie, which is animated much better. It feels like that tried to make the animation more fluid, but as a result, it comes off as strange and confusing, it's also extremely hard to understand what's going on a lot of the time. And as far as the uses of CGI goes, it doesn't fit, not at all. So yeah, very poor animation. Overall, this was a bad movie, and I did not enjoy it at all. Most of the enjoyment I did get from it came from laughing at the animation for most of the movie, and the dark atmosphere does not fit One Piece at all.

Start a new discussion for One Piece Movie 6: Omatsuri Danshaku to Himitsu no Shima anime. Please be fair to others, for the full rules do refer to the Discussion Rules page.