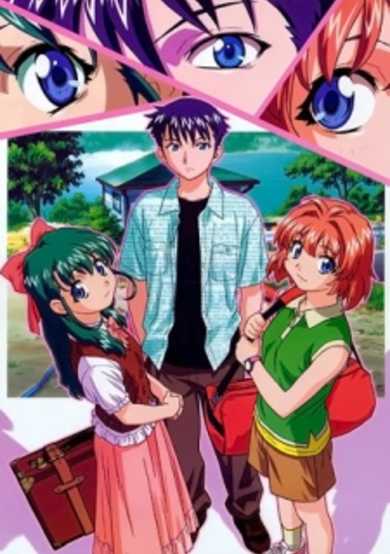 Two weeks have passed since the dilemma between Maiku, Karen and Miina was resolved, but their lives are more hectic than ever. Karen has become possessed in her newly discovered brother and Miina is desperate for attention as well, which leaves little time for Maiku to concentrate on his work. Therefore he decides to head out in the woods and set up a camp, where he can be work in peace. But, as always, we have Morino who is up to no good. To make things a bit more interesting, she organizes a field trip to Maiku's camp site, and encourages everyone to make some good summer memories.
User Count2352
Favorites Count4
Start Date28th Apr 2004
Next ReleaseInvalid date
Popularity Rank3229
Rating Rank5092
Age RatingR
Age Rating GuideMild Nudity
SubtypeOVA
Statusfinished

Like the extra episode of "Onegai Teacher", the extra episode of "Onegtai Twins" is a pile of poop, a blatent excuse for fanservice. In fact, this extra episode is even worse than that of "Onegai Teacher", which is an impressive feat given how sh\*t the latter is.The reason why I consider this to be worse is because in their eagerness to mass produce fan service, they completely threw character consistency out of the window. They've changed Karen from an introvert into an extrovert filled with incestual lust, and thus destroyed what little character integrity the entire series had. For an extra episode, that is in my opinion, one of the worst you can do to a series, and had I cared about the series to begin with, I might have been quite pissed. But as it is, it's no big deal, cos the series sucked bad anyway :P

Start a new discussion for Onegai☆Twins: Natsu wa Owaranai anime. Please be fair to others, for the full rules do refer to the Discussion Rules page.