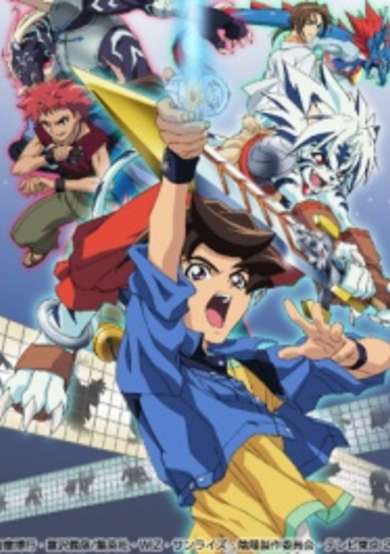 All his life, Riku Tachibana has been raised by his grandfather. For some reason, the old man has always been fond of strange hand gestures, and they've rubbed off on Riku, who performs them almost subconsciously, to his classmates' great amusement. One day, however, it suddenly becomes clear to Riku what his grandfather has been surreptitiously teaching him. And the teachings could mean the difference between life and death for Riku. (Source: ANN)

Riku Tachibana seems to be an ordinary middle school student with the worries of what club to join. His unique feature is that he makes odd hand gestures, and he does not know what they really are. His childhood friend Momo-chan goes through the first of many denials of liking Riku as more than just a friend. Riku decides to ask his grandfather what the gestures mean, and soon after, he finds himself making a contract with the Shikigami, Byakko no Kogenta. Riku finally discovers what those hand gestures are for, as he is now a Toujinshi of the Ten-ryuu

The news of Yamase's disappearance has reached Chi-ryuu Toujinshi Ujiyama and Yuuma Asuka, who has just defeated a Toujinshi of the Ten-ryuu with his powerful Shikigami, Byakko no Rangetsu. Much to Ujiyama's dismay, he is told by Yuuma to investigate Yamase's leads on the Head of the Ten-ryuu. Meanwhile, as his grandpa rests in the hospital, Riku searches for clues on some old documents found in his grandpa's bedroom. However, it is not long till Ujiyama and his Shikigami, Oobi no Mumyou, confront Riku and Kogenta.

Clash of the Byakko

Following a lead from his grandpa's notes, Riku goes to Ooiwasai to search for some more In. Soon after, he is attacked by Misasa, a Chi-ryuu Toujinshi, and her Shikigami, Kanro no Komaki. Can Riku find the new In before it's too late? And what will happen when Riku and Kogenta come face-to-face with Yuuma and Rangetsu?

Strength of the Sword! Saikaidō Kotetsu

Following a lead from their new friend, Masaomi, Riku and Kogenta go to the mountain region of Myoureizan in search of the In for "Saikaidou Kotetsu." Along the way, Riku meets a Toujinshi of the Ten-ryuu, Teru. Because he doesn't want to get Riku involved, Teru goes off by himself. Soon after, Riku and Kogenta fight against two Chi-ryuu Toujinshi, Hazan (Shikigami - Enoki no Otochika) and Dougen (Shikigami - Tsubaki no Gorouza). Teru joins in the battle with his Shikigami, Akagane no Isoroku. Also, Riku finds out the identity of Kogenta's "partner."

Fight Between Dragons and Tigers

One night, Masaomi explains to Riku about what Toujinshi and Shikigami are, and why the Ten-ryuu and the Chi-ryuu are currently fighting. It seems that the Chi-ryuu is interested in opening the Fukumaden Kimon, a gate that leads to demons and a power that could destroy the world, and the Ten-ryuu are trying to keep the Fukumaden Kimon closed. Masaomi also says that when Toujinshi lose their Shikigami, the Toujinshi lose their memories. Later, when Riku decides to clean up the damaged shrine, Yuuma confronts him, asking him about the Head of the Ten-ryuu. Then, his little brother, Souma, sick of Yuuma being on Mikazuchi's side, steps in and attempts to fight with him. However, Yuuma and Rangetsu end up fighting against Masaomi and his Shikigami, Seiryuu no Kibachiyo. Also, Riku and Kogenta face another Chi-ryuu Toujinshi and his Shikigami, Hanmou no Masurao

Kogenta really wants Riku to start training, but Riku doesn't know how to go about it. Then, thanks to some of Rina's books, Riku gets some information on a special area for training. So, he, Rina, and Momo find a training area for using Toujinfu (cards for Toujin seals). Before the training could actually begin, Riku and Kogenta must fight against another Earth Style Toujinshi, Gonpachi, and his Shikigami, Souka no Raiden. The battle gets tough when Riku and Kogenta have to deal with Gonpachi and Raiden and also have to protect Momo and Rina from the demons that reside in the training area.

The Boat Club goes on their first outdoor practice. Riku, though, has an objective to fulfill while on this trip. Using translations of his grandpa's notes, he and Kogenta find a new In. Meanwhile, Danjou, a Chi-ryuu Toujinshi, and his Shikigami, Akagane no Misohito, terrorize a nearby rural town in search for a Ten-ryuu Kimon and then open it. To do so, they force the village leader into showing them the location of the Kimon. Riku and Kogenta find and confront Danjou and Misohito. When Riku decides to use the newly-found In, it inexplicably doesn't work. Can Riku get the In to work in time?

Souma gets frustrated by Mikazuchi, his brother Yuuma, and the Ten-ryuu. So, he decides to run away, but he doesn't have any money. With no place else to go, he heads back to Riku's destroyed shrine. There, he and his Shikigami, Ikazuchi no Fusanoshin, fight Kirihito, a Chi-ryuu Toujinshi, and his Shikigami, Uzumibi no Mingobee, who have been requested by Mikazuchi to eliminate Souma.

One night, Kogenta decides to teach Riku a new In as proof of their trust towards each other: Hissatsu - Hundred Ghost Obliteration Attack. As described by Kogenta, it focuses all of his remaining energy into one powerful blast. After the attack, however, Kogenta would be unable to move, and if the enemy survives, then Kogenta would be completely defenseless. Kogenta takes this matter lightly, but Riku thinks that he's just being selfish. Now, Riku tries to find ways to get stronger as a Toujinshi (while leaving his Drive with Kogenta stuck in it in his freezer). Soon after, Riku is challenged by Izou Kenzaki, a rank-5 Chi-ryuu Toujinshi, and his Shikigami, Kurogane no Fuji. Riku, with a more serious (and scary) look of determination on his face, and Kogenta fare well against Izou and Fuji. But when Izou starts to use cheating methods, Riku must choose whether or not to use the new In that Kogenta taught him.

Battle at the Mysterious Ancient Capital

Riku's grandpa finally wakes up, and he tells Riku to go to the Ten-ryuu Taihaku Shrine in Kyoto. He eventually finds the Taihaku shrine and meets a young girl who seems to be the only person working at the shrine. She begins Riku's "training," but then a Chi-ryuu Toujinshi named Chihaya busts in and summons his Shikigami, Kaede no Kurenai. When they are about to finish off Riku and Kogenta, the girl reveals herself as Nazuna, a Toujinshi of the Ten-ryuu, and summons her Shikigami, Hiiragi no Horin.

Start a new discussion for Onmyou Taisenki anime. Please be fair to others, for the full rules do refer to the Discussion Rules page.