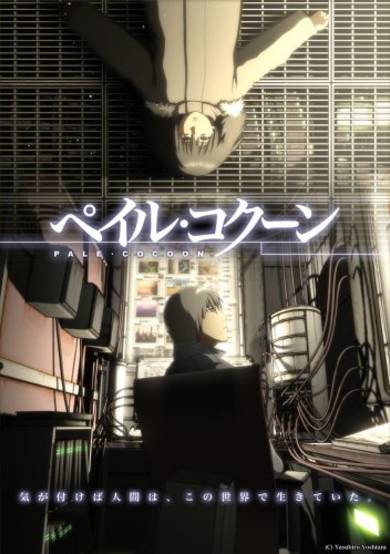 A future where the continuity of history has broken off, a world of enormous ruins that continues endlessly. Oceans and continents have vanished, existing only within the archives brought up from the remains. Ura works in the Archive Excavation Department, which restores and analyzes the data left behind. One day, he finds a disturbing visual record... (Source: ANN)

“The archives we know of as history ended at some point. Before we knew it, humans were living in this world.” ‘Pale Cocoon’ is a poignant account of a distant future when the beautiful earth inhabited by the living has been ruined due to the stupidity of the mankind itself, leading the planet to be barren and uninhabitable, and humans to migrate to a supposedly ‘artificial colony’. The blue sky, the vast tracts of greenery and the flora are nothing more than bitter memories of homeland. On the colony, there is the Excavation Department whose sole purpose of existence is to retrieve digitally recorded information of the planet. Ura, a young man, is a member of the Department who is quite enthused to restore the lost data. On the contrary, Riko is a young woman who has lost all her hopes and doesn’t show much enthusiasm in the restoration as she is driven by the feeling that reminiscing about something that has been lost and possibly won’t come back will only be a reminder of the stupidity of humans and bring forth sorrow. This OVA had a profound effect on me and it is certainly going to stay in the back of my mind for a long time. It is brilliantly presented without it resorting to too much complexity as most of the works with the sci-fic tag tend to be. It is indeed remarkable how it has accomplished to be this impressive in its short duration of 23 minutes. Everything is incredible in my opinion, be it the plot, the art or the soundtracks. Yoshiura Yasuhiro, the writer and the director, has done a brilliant job with both the scripting and the direction. He doesn’t bluntly give away details of what’s going on to the viewers; rather he expects the viewers to understand themselves through the actions of the characters and the surroundings. Viewers in the beginning are made to have a vague idea of something and as everything gradually unfolds, they are made to realize that they were wrong in the first place and it’s actually some other way round. If you have watched the OVA, you probably know what I mean. I’d like to conclude this review by saying that ‘Pale Cocoon’ is something that you should definitely watch if you haven’t yet. Some of you may have difficulty understanding what is going on in the beginning but don’t let that be a reason for you to turn it down. It gets better after some time. It stirs bitter sweet feelings in you and makes you nostalgic. It comes forth as yet another reminder of destruction and misery awaiting the mankind. I was trying to be critical and rate it 9 but I just couldn’t bring myself to do that. So, a perfect 10/10 score for this beautiful piece of work.

Pale Cocoon is a strange little one off OVA. The first thing that immediately popped out to me was the colour palette. The OVA is washed in a dull, sepia like tone. The tones of the background and the characters blend into each other gently, the settings only occasionally punctuated by neon greens from lights or machines. I'll avoid the story of Pale Cocoon, because it is a very short OVA, barely scratching over the 20 minute mark, and it is just enough to keep the viewer engaged, but not long enough to over stay it's welcome, or too much to keep the viewer from wanting more, so if you can spare the time, and have the chance, I recommend you take the chance to watch it for yourself. Another thing that stands out greatly from Pale Cocoon, is the eeriness of the setting. Built through it's good use of camera angles and movements, along with the ambient noise used in many of the scenes without music, the low, thrumming sound of machinery and the buzzing of computers helps set an incredibly eerie atmosphere that helps punctuate the setting. Even in it's more gentle moments, Pale Cocoon keeps you feeling ever slightly off put. The animation style of Pale Cocoon is very visual interesting, though, only for a brief period of time, it is most noticeable in the characters, everything has a strange, rotoscoped feel to it, if one was familiar with Richard Linklater's adaptation of "A Scanner Darkly", one would definitely feel a similarity. Despite the praise I give it for the technical aspects, the story can seem a bit slow at the beginning, you're plunged in heavily at the beginning, to a unfamiliar setting, and into the point of view of the main character, though, by the end of it's run time, you've definitely understood it, through I personally did not feel engaged until the 7 or 8 minute mark. Overall, I don't believe that Pale Cocoon is anything amazing, or anything revolutionary, but I certainly think it is worth your time, for something so short, it's visually unique and has quite a resonating story. Despite it's length, you're certainly going to feel like it was worth it.

Start a new discussion for Pale Cocoon anime. Please be fair to others, for the full rules do refer to the Discussion Rules page.