The 11-year-old Miyamoto Rebecca becomes the new teacher of a classroom which is full of weirdos. Despite her cute looks she's a little beast and can be pretty sarcastic and offensive. The school is not safe anymore now that she's in charge of a class and her students, Himeko, Ichijou, Rei and a white rabbit who took a liking to Rebecca help her to rough up the school and the neighbor with its teacher "ojii-chan." (Source: ANN) 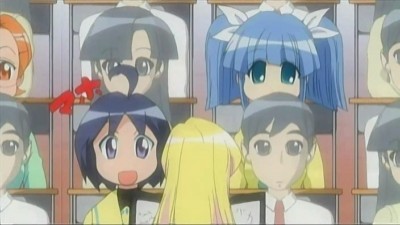 A Light Kimono on A Cold Day, A Wadded Cotton Cloth on the Dog Days 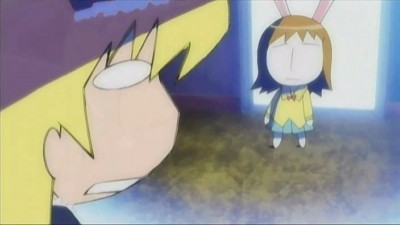 A Pretty, Hidden, and Pure Garden of Crimson

Becky is having trouble remembering the names of her students so refers to them by nicknames at first. Ultimately, she causes Kurumi to become depressed after calling her "plain". 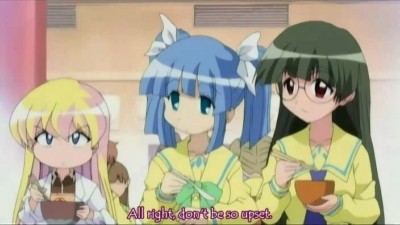 Falling Ill and a Body with a Discernable Eye

Annoyed at Himeko's overactive nature, Becky rips off her ahoge which completely depletes her energy. The ahoge is transported off the planet by the aliens who then lose it. Becky must make a replacement ahoge for Himeko. 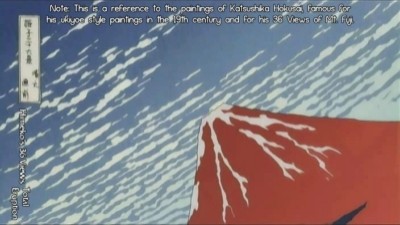 Praising the Fine Weather and Waiting for the Sunset

Becky unexpectedly announces there is to be a test the next day and the students of class 1-C don't know where to begin on studying. In the end they all decide to go to a sauna to try to study though not much gets done as far as academics is concerned. 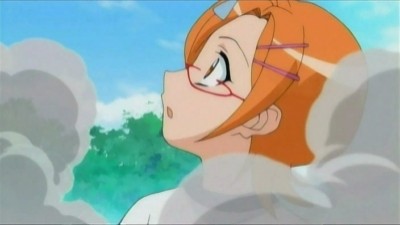 Treasures For a Wish Come True

All of the classes go to on a camping trip with teams consisting of four people. Kurumi, the one who planned the teams for her class, failed to remember to put her name on the list. Depressed about once again being forgotten, Becky tries to cheer her up. 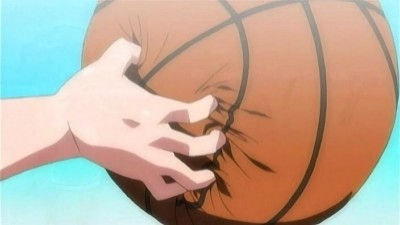 Submitting to the Snake That Struck From the Scrub

Becky gets permission from the headmaster to have a personal research lab though getting the room to have it in is hard enough. Once finished, students start coming to her with their problems. 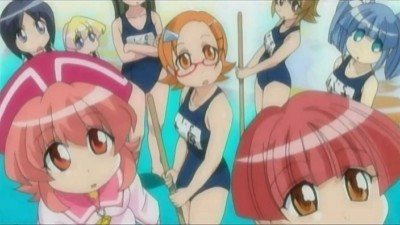 Good or Bad Luck Doesn't Depend on the Day but People

Class 1-C, due to Becky losing at Rock, Paper, Scissors, has to clean the school pool today. Also, Ichijou's little sister comes to school and causes some trouble. 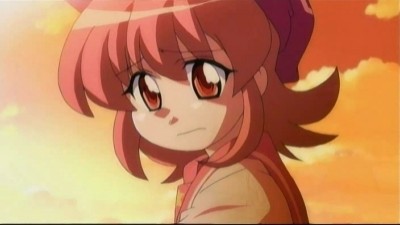 Behoimi, the self-proclaimed magical girl from class 1-D, is starting to doubt her value compared to many of the other students who appear to have better characters. Becky tries to cheer her up, but doesn't succeed. 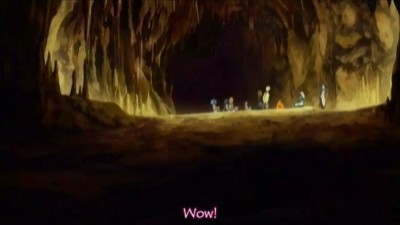 Becky is invited to an island on the southern tip of Japan to take part in an archeology expedition, though when she arrives she finds the students of her class already there. 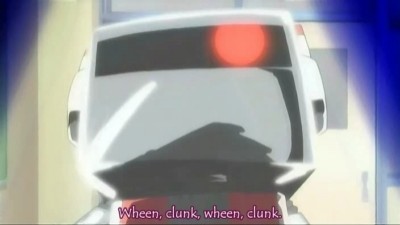 Even a Purebred Has Its Habits

Now that summer vacation is over, the students must present a project that they did over the break. Meanwhile, Behoimi and Media try to disarm a large amount of bombs that were set all over the school.

Pani Poni Dash can be best described as Azumanga Daoih as done by Shaft. A comedy about a bunch of cute teenage girls doing dumb stuff. This was one of the first anime made by Akiyuki Shinbo's start up studio, only their second after Moonphase, and his style is as prevalent as ever. Quick cuts, otaku references, bizarre imagery, dynamic camera angles, shifting art styles and the usual unsettling fascination with the pre-pubescent female form. I've always rather liked his style (well, apart from the pedophilia, but whatever) because it makes scenes far more interesting to watch than bland talking heads. If anything, Shinbo has probably toned down his weirdness in recent years. Pani Poni Dash is probably the most visually eccentric of any of his works (bar possibly Sayonara Zetsubo Sensei). There's never not something happening on screen. Most of it is sheer non-sequitur strangeness and I was struggling to find some sort of connecting thread between what Shinbo was trying to do with this. It did eventually click though.You see, there is no plot or driving force to Pani Poni Dash. It is ostensibly about Rebecca Miyamoto, child genius, becoming a teacher and trying to gain the respect of her students. But rarely were the on-screen events of any real interest. What the real 'story' was about was the Shaftyness of the directing breaking the fourth wall, laughing at its existence as an anime. Frequently the camera would zoom out to reveal the characters were all on a set. Big fluffy microphones would occasionally drop down into view. Stage hands would walk across the camera. Visual metaphors would be drawn attention to by the characters. A giant hand descended from nowhere to turn the world around to indicate the passing of time, only for some aliens to notice this giant hand and desperately trying to convince his captain of what he had just seen. Those aliens were reoccurring characters and I liked them a lot. Their mission was supposed to be monitoring Rebecca, but what they acted as was viewers of this television production, commenting on their inability to follow the plot or choosing their favourite characters.There are loads of other little tricks like this pulled to poke fun as its existence as an anime, and I'm not going to go through them all, but I would like to mention this final one. Sometimes when the girls were talking, they would pose in some sort of sexy position, their curves amplified, even though it had nothing to do with whatever nonsense they happened to be saying at the time. It was a perfect example of "what these characters are saying is of no importance, they're only here to give you eyecandy". With the boom of 'cute girls doing cute things' anime that occurred just after Pani Poni Dash, it was rather funny to see Shaft mocking the pointlessness of them before they even existed.The problem with Pani Poni Dash is it really only has this one trick, and it doesn't develop. It's a problem I have with a lot of early Shaft anime, from SZS to Maria Holic. There's no development of the jokes. They're just one-trick ponies. It may be a brilliant trick, but it still gets old when you keep repeating it. The other problem I had with early Shaft stuff is the visual fuckery has nothing to do with the actual story. I get that the visuals being disconnected in Pani Poni Dash is kind of the point, but the story the visuals tell don't develop either. This is the main reason why I love new-age Shaft with Arakawa and Madoka Magica. Their crazy visuals actually serve to enhance the story itself and develop along with the story.There's no development of anything in Pani Poni Dash. Going back to the Azumanga comparisons again, what made Azumanga click so well is because the characters and the jokes built up over time. Azumanga's big thing is reoccurring jokes, but these jokes develop as the series goes on, playing on your perceptions of how the joke is supposed to go. I consider Azumanga's final episode to be one of the best endings of all time, because you really feel like you've lived their high school lives with each of the characters and watched them develop. Pani Poni has none of that whatsoever. The characters are either shouty irritants or people whose actions have no bearing on sentient thought. They aren't the focus of the anime, the fourth wall destruction through the visuals is, but that doesn't develop over time either. It stagnates incredibly quickly.Pani Poni is genuinely funny and entertaining, but it has absolutely no right being 26 episodes long. I don't think it has any right being even 13 episodes long. By extending the length of the series far beyond its jokes sell-by date, it cheapens and damages the things it actually did well. The more I watched, the more my enthusiasm for the series was sapped out of me. In fact, I dropped it after 14 episodes. Call me an unproffesional reviewer with no patience who can't review of anything if they don't consume every single part of it, but fuck you. I had gotten everything I wanted from Pani Poni Dash after 6 episodes. I saw no indication that it was going to improve. Watching anymore would have only damaged my opinion of it. I'm not going to continue doing something I don't like simply because it's not considered a 'proper review'. I'm not getting paid for this. So, for what it's worth, my review of the first 14 episodes. Funny stuff, but gets stale very quickly.

Start a new discussion for Paniponi Dash! anime. Please be fair to others, for the full rules do refer to the Discussion Rules page.