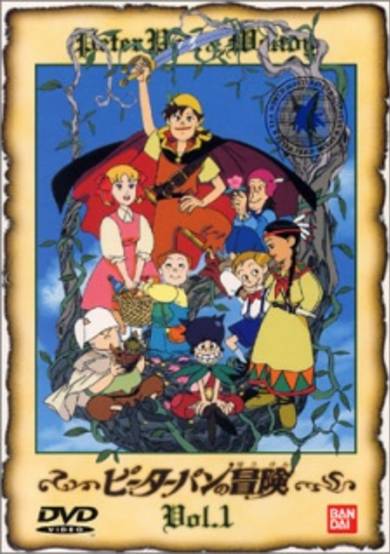 Wendy and her two little brothers are brought to the land of adventures, Neverland, by Peter pan, a boy who will never grow up. In Neverland they encounter exciting events and meet with little fairies, mermaids, Indians, and pirates. Required to act as a mother, Wendy never has a moments peace with all that is happening around her, including breath-taking fights with pirates. Later in the series, they set off to find a buried treasure with a map that they obtain from the pirates. (Source: AnimeNfo)
User Count386
Favorites Count0
Start Date15th Jan 1989
Next ReleaseInvalid date
Popularity Rank7058
Rating Rank6120
Age RatingG
Age Rating GuideAll Ages
SubtypeTV
Statusfinished

Who is Peter Pan?

John and Michael attempt to fly once again (unsuccessfully), but are saved by Peter just before they hit the ground. Afterwards, the Darlings and Lost Boys go looking for mermaids. After hours of waiting for the girls to appear, Slightly, Curly and John go looking for more adventure someplace else (preferably having to do with pirates). Upon their leaving, the mermaids take Michael and Wendy down into the water, and, being the only one else present, Tootles dives down and saves them. At the tree house, Tootles shows them a cute little raccoon named Rascal. Meanwhile, John gets his first look at the pirates-- and gets caught by them, along with Curly and Slightly. On the ship, Captain Hook appears for the first time and puts John up on a plank high above the water. Before he gets to laugh, Peter appears. Unable to fly away, with his friends held hostage and Hook coming at him with a sword, there seems to be no chance for Peter to get away alive. But fortunately for him, this episode also includes the first appearance of the ticking crocodile.

Start a new discussion for Peter Pan no Bouken anime. Please be fair to others, for the full rules do refer to the Discussion Rules page.