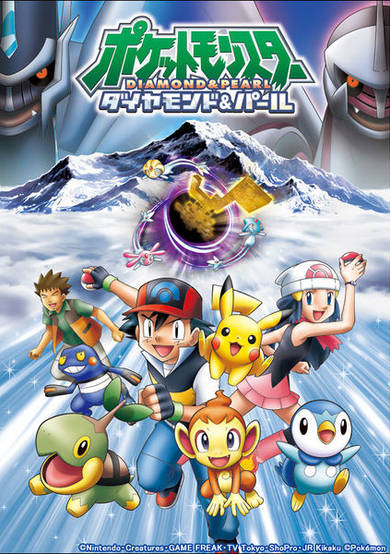 After defeating Pyramid King Jindai and declining the offer to be a Frontier Brain, Satoshi sets off to travel through the far away land of Sinnoh. Once he gets there, he meets up with Hikari, a local trainer from the region, and they decide to travel together.
User Count8068
Favorites Count31
Start Date28th Sep 2006
Next ReleaseInvalid date
Popularity Rank1414
Rating Rank4869
Age RatingPG
Age Rating GuideChildren
SubtypeTV
Statusfinished

It's always exciting when new Pokemon Trainers receives their first Pokemon, but for a girl named Dawn, things will be far more exciting than she'd ever imagined! Here in the Sinnoh region, Trainers receive their Pokemon from Professor Rowan, whose lab is near Sandgem Town—but soon after Dawn leaves her home in Twinleaf Town and heads for the lab, she's hopelessly lost. Fortunately, she runs into Professor Rowan on the street and follows him to the lab. But while the Professor was out, his assistants accidentally let two of the starter Pokemon, Chimchar and Pilplup, break out of the lab. Dawn volunteers to find the missing Pokemon and soon finds Piplup, who runs off and gets into trouble with some Ariados. Though Dawn comes to the rescue, Piplup isn't exactly grateful. Once the angered Ariados return, however, Piplup and Dawn must work together in order to escape. They end up on the shore of Lake Verity, where they spot a mysterious Pokemon. Then, back at the lab, Dawn makes their partnership official and chooses Piplup to be her companion. Meanwhile, Ash has arrived in Sinnoh with Pikachu and his stowaway Aipom. He's ready for adventure, but not ready for trouble: Team Rocket appears and successfully steals Pikachu! But Team Rocket starts arguing and everyone ends up flying, including Pikachu. Now how will Ash and Pikachu be reunited...?

Do Your Best, Pochama!!

Gureggru of the Mysterious Gym!

it always upset me when ash never evolved his pokemon and i still bugs me today. pokemon diamond and pearl were the games that made me love the games and hate the anime

Start a new discussion for Pokemon Diamond & Pearl anime. Please be fair to others, for the full rules do refer to the Discussion Rules page.