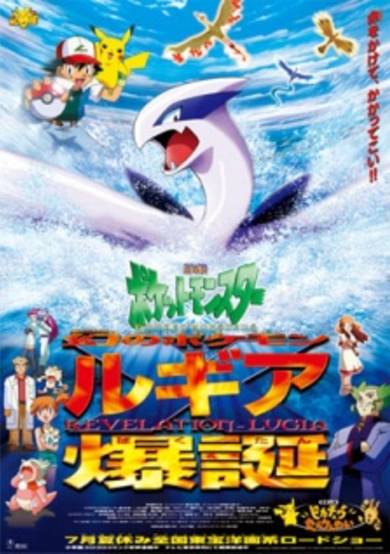 A greedy collector, Lawrence III, wants to capture the legendary Pokemon, Lugia. But in order to do so, he must capture the Titans of Fire, Ice, and Lightning. The titans are powerful bird-like Pokemon, and if they are disturbed they will wage a war against eachother which will ultimately result in earth's destruction. Ash, Misty, and Tracey get caught up in the situation when they end up being washed ashore onto Shamouti Island. Soon after, Ash meets a girl named Melody who sends him into a mission where he must collect the 3 Orbs which will quell the fighting, but first Ash must gain help from the Beast of the Sea, Lugia, if he's to suceed. (Source: ANN)
User Count12197
Favorites Count41
Start Date17th Jul 1999
Next ReleaseInvalid date
Popularity Rank977
Rating Rank3389
Age RatingPG
Age Rating GuideChildren
Subtypemovie
Statusfinished

This is the movie which started my love affair with anime. I saw it when I was 8, and it still holds up pretty well. I may speak with the rose-tinted glasses of nostalgia, but this is still a pretty good movie, with a fair amount of action and comedy as befits an overall shonen series.

Start a new discussion for Pokemon: Maboroshi no Pokemon Lugia Bakutan anime. Please be fair to others, for the full rules do refer to the Discussion Rules page.