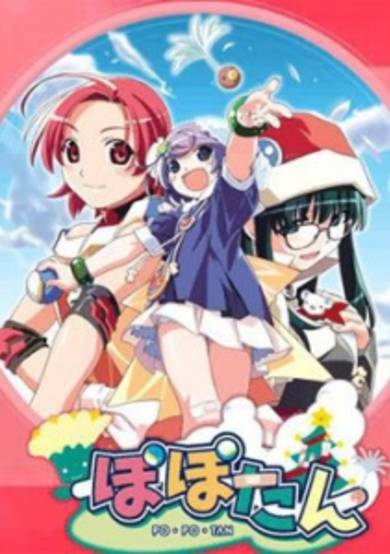 Beautiful sisters Ai, Mai, Mii, their android maid Mea and slippery pet ferret Unagi make an amazing journey together through time and space without ever leaving their beloved mansion behind! Following the clues of the strange dandelion-like "Popotan," the girls are theoretically seeking the person who has the answers to their most personal questions, but they seem to have more than enough time to take side trips, meet new friends, visit hot springs and occasionally operate the X-mas shop they keep in the house along the way! Yet, the girls' ultimate destiny holds more than a few surprises of its own, and not every moment is filled with hilarity, as moving through time means having to leave friends behind as well. (Source: RightStuf)
User Count2081
Favorites Count2
Start Date18th Mar 2003
Next ReleaseInvalid date
Popularity Rank3444
Rating Rank8899
Age RatingR
Age Rating GuideMild Nudity
SubtypeTV
Statusfinished A young boy called Daichi visits a mansion in an attempt to impress Asuka, a girl in his class who believes in ghosts. Inside, he meets three sisters, Ai, Mai, Mii and their maid, Mea. Unknown to Daichi, the mansion and its inhabitants are traveling through time and space. After hearing him spread a rumor that the mansion is haunted, and learning of his feelings for Asuka, the three sisters, led by Ai, agree to help Daichi fake photographs to impress her. When he shows the photographs at school his schoolmates initially believe the house to be haunted, but they later discover the truth. Believing that Asuka now hates him, Daichi returns to Ai for consolation, and falls asleep. When he wakes up, Daichi finds himself lying in a field of dandelions as the mansion disappears and Asuka comes by to see him.

Mai has never enjoyed her journey through time, and is depressed by the constant loss of new friends, and the feeling that they may be equally saddened when she disappears. While attending high school, she resolves to be firm in keeping others at a distance, but she warms to the interest shown by a classmate, Konami. Mai and Konami become friends during a class assignment in which they draw each other's portrait, even though Mai understands that their friendship must be short-lived. Konami convinces Mai that it does not matter when or where they are together, because it is the memories and feelings that are important.

Mii decides to cosplay as Magical Girl Lilo, an anime series character created especially for Popotan. Ai buys the custom-designed costume for her, and Mii runs around town trying, with varying degrees of success, to help people who believe she is a real "magical girl”. After a while she meets Miyuki, a girl about her own age, who is confined to hospital because of an incurable disease. At Mii's insistence, and with Miyuki wearing an identical costume to Mii's, the two girls set off to continue Mii's quest to help individuals in need. Eventually, Miyuki collapses due to the strain on her body, and Mii uses her power, with the help of her sisters, to heal Miyuki permanently.

Alone in the mansion's Christmas shop, Mea meets an unnamed girl who insists that Mea fixes her doll. When the sisters return, the girl vanishes, leaving her doll behind. Although she was initially reluctant, Mea decides to repair the mysterious girls' doll. The next day, Mai and Mii disappear as they are exploring an abandoned village. When the girl returns to retrieve her doll from Mea, she mentions the abandoned village when asked where she comes from, before once again disappearing. After Ai too vanishes, the mystery girl reappears. She leads Mea to the sisters, who have been placed in an enchanted dream about their greatest desires by the girl, who is a lonesome spirit. She attempts to enchant Mea as well, but fails when she realizes that Mea has no dreams. With that, the sisters are freed from their enchantment.

The mansion arrives at a place and time where an amusement park is being built. Ai finds a "popotan" who says she knows where to find Shizuku, the person they are searching for. The dandelion insists that all of the girls, including Mea, go to the spring festival and enter the “Miss Spring Bloom” contest. The dandelion then insists that the girls visit various hot springs and play ping-pong. After following the directions given by the dandlion they find their destination in ruins. There is a great field nearby, but Shizuku cannot be found, although the girls discover what she looks like from a vision in their minds. Mai and Mea are left behind when the mansion leaves without them.

The mansion reappears five years later in the same spot, this time surrounded by the amusement park that had been under construction in the previous episode. Ai uses her ability to talk with flowers and discovers that Mai is still close by. She believes that to be the reason why they have unusually returned to the same place as they traveled through time, and she and Mii begin searching. Meanwhile, Mai hears about the mansion from her friends, who think it is a new attraction in the amusement park. Mai waits to intercept Ai and Mii as they return to the mansion that evening. Despite her joy at their reunion, Mai wishes to stay and live a normal life, but after Ai explains that their bodies do not age, she resigns herself to her fate.

Things That Cannot Be Said

Thirty years after his first encounter Daichi sees the mansion again, in a photo taken of his daughter at the beach. When he goes to investigate Ai does not know how to react, and so Keith, a Guide under Shizuku, forces him to leave. Ai is smitten with Keith, until he attacks Daichi after Daichi returns to the mansion to confirm his suspicions about its true nature. The girls try to help Daichi, and they learn of Keith's true identity. Because of his deception and his attack on Daichi, Ai's feelings for Keith change. Daichi, having learned about the girls' journey, promises to keep it a secret.

The mansion arrives in the holy grounds of a Shinto shrine, where Mii meets Nono, a devout shrine maiden in training. Nono loves Christmas,[n 2] but her grandfather, the Shinto priest who is training her, is very strict and does not like her practicing non-Shintoist ways, especially as she had been so devout in her Shintoistic training. However, Nono cannot seem to ignore the temptations of the mansion's Christmas shop and visits repeatedly until, against Nono's wishes, Mii persuades the girls to place Christmas decorations on the shrine. When Nono's grandfather sees this he tells her to leave, and that she cannot continue her training, so she stays in the mansion. Despite the harsh words, the pair miss each other's company. The grandfather relents, so Mii arranges for Nono and him to share a Christmas celebration together.

Forty years later, the girls return to the city Konami once lived in. Shortly after their arrival, Mai, the middle sister, mistakes Konami's daughter, also named Mai, for Konami. Konami's daughter has always resented being named after her mother's friend, so when Mai tries to befriend her she is at first rebuffed. Their relationship blossoms after Konami's daughter finds Mai searching through some garbage looking for the sketchbook that her classmates had hidden. The sketchbook is returned to her by some other classmates. Konami's daughter tells Mai how her mother had waited for her return, which rekindles Mai's unhappiness about the impact the girls' journey has on those who are left behind. Following Mai's sudden departure, Konami's daughter is distraught, and she suddenly realizes that her vanished new friend and the girl whose portrait her mother once drew are one and the same.

Mai is upset following her encounter with Konami's daughter, and tries to destroy her memories of Konami. Mea intervenes and retrieves the portrait that Konami had drawn of Mai. She stores it with her other keepsakes, which triggers memories of her past in guarding two brothers on the journey. Mea meets up with Keith, who tells her that he will take the girls to see Shizuku. As a result of her experiences with the two brothers in the past, Mea is loath to allow the three sisters to visit Shizuku, but Ai learns of the mansion's next destination from some dandelions, and the sisters celebrate the news. Mea tries to stop Keith from entering the mansion, but she is easily overpowered and left behind when the mansion disappears.

The series follows three sisters and their android maid as they travel through time in their magical Christmas Store/home. They meet and make friends, losing them with each disappearance of their home, leaving, searching as guided by the Popotan (the dandelions) who speak to them. I though it was kind of silly as I watched the first episode, but as the characters developed, I got hooked. They have sisterly arguments and makeups, and usually end on a happy note. If casual home nudity bothers you, then this one is not for you. The series is set  in Japan where co-ed communal bathing occurs. I viewed this series on Netflix Streaming.

Popotan is the definition of an underrated gem STORY I find Popotan's story to be all over the place at times, but it is rather nice and refreshing for a visual novel adaptation. Most visual novel adaptations are harems (because most visual novels are dating sims) while I love these kinds of shows, it can be nice for things to change a bit. I think the greatest part is the perfect mix of comedy and drama Popotan has. ANIMATION Being animated by Shaft (before they made a name for themselves) it is extremely well animated. The character designs are very nice and you can tell each girl apart. There is some fanservice, but thats not really a problem with me. SOUND The dub is unfortunately, not very good. But it does get better overtime. The JP dub is fairly well done. The OP is really catchy. As for the BGM, its good, not really much to talk about. CHARACTERS This is the best part of Popotan, every character is well defined and has a personality. Even though lots of them are stereo-types, they are still good characters. Ai is kind to everyone and can't hate anyone. Mai is a bit of a tsundere, but she really does care for people. Mii is your typical happy-go-lucky loli, but is pretty cute. And Mea is a Dandere, but does have lots of funny moments. Overall the cast is lovely. Overall I really did enjoy Popotan, I highly recommend it. Popotan is available for legal streaming on Hulu and Amazon Prime Video.

Start a new discussion for Popotan anime. Please be fair to others, for the full rules do refer to the Discussion Rules page.