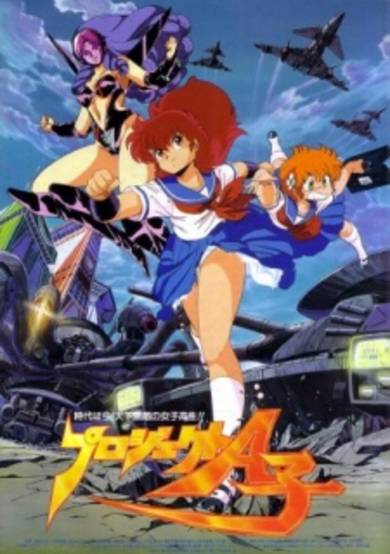 Sixteen years have passed since a mysterious alien ship crashed on Earth. Graviton City, once leveled by the ship's crash, is now a bustling metropolis. Within the city's high school, superhuman high school student A-Ko Magami dukes it out with the diabolical genius B-Ko Daitokuji, who will stop at nothing to win the friendship of A-Ko's buddy C-Ko Kotobuki. Meanwhile, in outer space, another alien ship is on course towards Earth to find its planet's lost princess. (Source: ANN)

Among the Western fanbase of Japanese cartoons, there is apparently quite a lot of people who like the film Project A-ko. This is probably due to the fact that it was released at a time where most localized anime geared for adults was rather mature and gritty (think Evangelion or Cowboy Bebop,) while this was more immature and lighthearted. Regardless of why other people like it, I did not enjoy it; finding it to be rather boring and uninspiring.There's nothing particularly good about the story or plot, but that's forgivable seeing how this is a comedy. It's about three highschool girls, A-ko, B-ko, and C-ko, (literally “Girl A,” Girl B,” and “Girl C.”) A-Ko and C-ko are best friends–the former of which happens to have super strength and speed. B-ko is A-ko's rival from kindergarten, and has a crush on C-ko, and thus uses her mad scientists skills to constantly challenge A-ko in an attempt to win C-ko's heart. There's also an alien invasion later on.The biggest problem with this film is that more often than not, it's unfunny and doesn't deliver as a comedy. Supposedly there is a fist full of references parodying various anime from the 1980s, and a large portion of the comedy relies on these references. If this is true, than that would explain why I didn't really find Project A-ko to be very enjoyable. As far as Japanese cartoons go, I'm not exactly well cultured when it comes to anything prior to the '90s, so most of these references were invisible to me. I did catch the jibe they made at Fist of the North Star, which I found pretty hilarious–so had I been able to understand all the other references, maybe I would have liked this more. I doubt it would have much of a difference however.Perhaps it's not the best idea for me to criticize for not "understanding" it, but I can at least say this: comedies that rely on parodying other stories tend to not age well. As time passes, less and less people will be able to appreciate the work, until eventually only a niche group of people will be able to truly appreciate it. Some more time later and maybe no one will understand it–which is actually kind of depressing, but hey, that's how it is.As I said, the story and plot is nothing special, and this in part due to the fact that all of the characters are rather shallow and uninteresting. B-ko is your typical one-dimensional villain/rival, who really wants nothing more but to kill A-ko and win the heart of C-ko–which was probably supposed to be funny, but wasn't. C-ko in particular is rather annoying and unlikable, as all she ever does is act like some sort of seven year old, and cries whenever someone calls her out for being a cloudcukoolander. Which again, was probably supposed to be funny, but wasn't. A-ko would be the best of the characters, but only because there's nothing particularly good or bad about her.The only thing about Project-Ako that's consistently good would be the huge action sequence in the final thirty minutes of the film. It starts with A-ko and B-ko's final duel, and than sort of escalates once the city is attacked by aliens. It's ridiculous and exciting, and actually pretty enjoyable. One scene that stand outs is when A-ko ascends to the floating alien spaceship by hopping on and off missiles that are being shot in her direction.Since Project A-ko is considered to be one of the classics, you might want to watch it anyways–just don't except anything to be enjoyable apart from the action sequences.

Start a new discussion for Project A-Ko anime. Please be fair to others, for the full rules do refer to the Discussion Rules page.