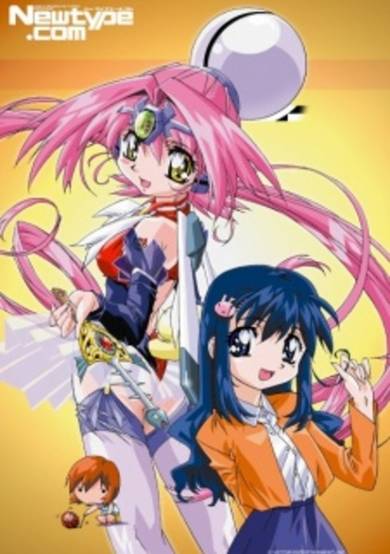 Poemi Watanabe (a.k.a. Kobayashi) is a 10-year-old girl with aspirations of being a famous voice actress. Unfortunately, her school grades are bad and her voice acting is even worse. But when a mysterious alien kills her parents and wreaks havoc all over Tokyo, Poemi grabs a talking fish, skins it into a wand and becomes the magical girl Puni Puni Poemi to save the day. (Source: ANN)
User Count2631
Favorites Count6
Start Date7th Mar 2001
Next ReleaseInvalid date
Popularity Rank3040
Rating Rank8228
Age RatingR
Age Rating GuideMild Nudity
SubtypeOVA
Statusfinished

Poemy is in a Bad Mood

The introductory sequence shows Poemy fighting shadowy figures of various other magical girls such as Usagi Tsukino from Sailor Moon, Tickle from Majokko Tickle, Utena from Revolutionary Girl Utena, Megu and Non from Majokko Megu-chan, Mahoro from Mahoromatic, Sakura Kinomoto from Cardcaptor Sakura, and the considered first magical girl in Japanese animation, Sally, from Sally, the Witch. At the start of a new school year the over-energetic Poemy Watanabe is introduced, along with her adoptive parents Nabeshin and Kumi-Kumi. Poemy rushes to the school to be the first there, at the same time she repeatedly proclaims her desire to become a successful voice actress. At the school, Poemy's best girl friend, Futaba Aasu, is presented as Poemy's biggest supporter and in fact perennially sexually attracted to her. Back from school, Poemy and Futaba realize the horror of finding Poemy's parents and their robot dog crucified by Alien #1, an extraterrestrial assassin with peculiar genitalia. Her home destroyed, Poemy moves in with Futaba and her six sisters. Later, a massive alien robot attacks the city, whereupon it turns out that Futaba and her sisters are actually a secret team of super-powered heroines dedicated to defending the Earth, also known as Sol III. Unfortunately, the Aasu sisters' magic is strictly defensive, so they are unable to defeat the rampaging robot. Meanwhile, Poemy obtains a talking, magic fish that when used as a magic wand transforms her into Puni Puni Poemy, a powerful magical girl. After the typical transformation, however, she promptly throws away her wand, forgoes the use of magic, and attacks the robot with her bare hands.

With a Dream Greater than Earth

Continuing from the previous scene, the wastefully energetic Poemy uses her new powers to tear through the alien mecha, destroying it. Next, Poemy decides to use her new strength to continue pursuing her career as a voice actress, and right wrongs as she sees them throughout society. However, Poemy appears to do more bad than good, as she harshly punishes citizens for small incidents, and accidentally sends a nuclear missile off-course, completely destroying an entire country. Then, the Aasu sisters finally decide to confront Puni Puni Poemy, and realize she is actually the Poemy Watanabe they have been hosting in their own house. Afterwards, it is revealed that K, the school boy whom Poemy is attracted to, is actually an octopus-like alien, and he will be commanding the following invasion to Earth. Next morning, the invasion proceeds, with a massive Death Star en route to Earth, and with K capturing the Aasu sisters, and subjecting them to hentai-related bondage, as he learned from Japanese animation. In the end, the two alien henchmen are inexplicably revealed to be Poemy's foster parents, Nabeshin and Kumi-Kumi, who are thus not dead, and Poemy and Futaba combine their powers in order to make the world nice and end the extraterrestrial menace.

Puni Puni Poemii is the spiritual successor to Excel Saga, if you haven't seen it watch an episode or read a review of that first. (It's better anyway) ***Story*** It's a gag anime; so in other words, the plot is thin. The characters are very self referential to the work they are in, for example the main character is working towards being a voice actress and Nabeshin, literally the director of the anime, is part of the story. The story is basically a "Save the world" parody of Sailor-Moon type anime, as well as ecchi anime. ***Animation*** It's a short OVA, so the quality of animation is rather good. ***Sound*** Good; sufficient. Nothing special, nor does it really need to be for 2 episode gag anime. English dub is not great - stick to subs. ***Characters*** The best character is probably Nabeshin, who yet again (as the director) has placed himself in a heroic and awesome position. :3 His appearance is short, however. Kobayashi delivers a fairly decent hyperactive character, great at some moments and dull at others. The other characters are simply stereotypes, which is fine and fairly funny for most of them for a 2 episode run. The villain is absolutely crap. I think Nabeshin was trying to make an innuendo joke about his large, hanging ball tail. The depth and humor of the character ends there. (Perhaps that's the greatest joke of all...) ***Enjoyment*** The story would be long winded and boring if it were any more than 2 episodes long - as it is the anime is enjoyable for a handful of quite good gags and good lame puns (although that is despite a couple of horrible ones). It will definitely appeal most, if not exclusively, to Excel Saga fans. ***Overall*** If you enjoyed Excel Saga you will likely enjoy this anime as a once off. Don't watch this if you haven't seen Excel Saga and don't watch this if you didn't LIKE Excel Saga.

Start a new discussion for Puni Puni☆Poemii anime. Please be fair to others, for the full rules do refer to the Discussion Rules page.