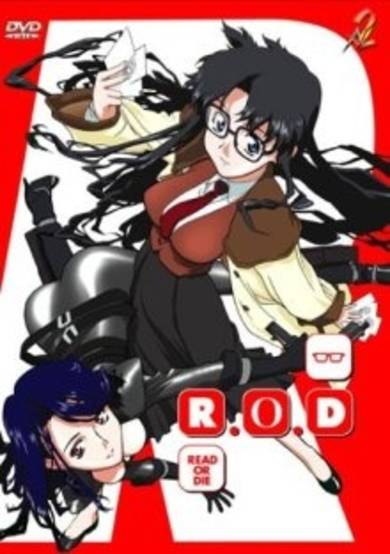 Yomiko Readman is a lovable, near-sighted bibliomaniac working as a substitute teacher at a Japanese high school. Her real identity, however, is that of a secret agent for the British Library Special Operations Division. Her codename: "The Paper." The moniker denotes her supernatural ability to freely manipulate paper into any object she can imagine, including tools and weapons in her fight against the powerful and self-serving IJIN (Great Historical Figure) Army! Along with her partner, the enigmatic "Ms. Deep," Yomiko travels across the world in attempt to solve the mystery behind the reincarnation of historical figures and their attempt to control the world. (Source: RightStuf)
User Count6030
Favorites Count60
Start Date23rd May 2001
Next ReleaseInvalid date
Popularity Rank1803
Rating Rank1223
Age RatingPG
Age Rating GuideTeens 13 or older
SubtypeOVA
Statusfinished

"Read or Die" might sound like some bizarre comedy show about over zealous parents trying to encourage their children to read more books instead of playing games/watch anime all day long, but in actual fact it's nothing like that. It's more like an anime version of X-Men (update: well, back when I originally wrote this review, this seemed like a good comparison, but now that there ACTUALLY IS an anime version of X-Men, this comparison is making me look like an ignorant n00b... but it amuses me to leave it in anyway :p). It's one of those shows that, category by category wise, seems to have most of the indegredients of a great show, but somehow ends up being significantly less than the sum of its parts.I watched this set of OVA's twice. The first time was soon after I was suffering from withdraw symptoms, having just finished watching one of my favourite series of all time ("Seikai no Senki II" )... and I found "Read of Die" to be rather boring. But suspecting that this is mostly due to bad timing, I decided to watch it again many years later, and though I did enjoy it more second time round, I still found it to be a little underwhelming.I think the main problem is that I didn't find it easy to get into it. Even though the premises is interest enough, there are no infectious characters in the cast. It beggars belief that the main heroine, The Paper, being such a ditzy character, can be a secret agent - I can't see how they can entrust anything of importance to someone like her. There are other things that doesn't make sense, like how "The Paper" can fight so well when she doesn't seem to have had any training, and how characters managed to escape from certain death situations etc. Quite a lot of the small details of the story like that are glossed over. However, the show got a lot stronger towards the end, throwing up some good plot twists. I was even starting to feel less detached to the characters.In the end though, it just wasn't quite enough. With its fantastic visuals, good if not great music (opening theme is slightly reminiscent the opening of "Cowboy Bebop") and interesting plot points, "Read or Die" is a pretty good all round package... but it just seems to be missing a certain something that makes the whole thing tick.

Start a new discussion for R.O.D OVA anime. Please be fair to others, for the full rules do refer to the Discussion Rules page.