In the year 2012 Japan was invaded by the Mu. Human-like beings from another dimension with blue blood. In the year 2015 Tokyo is attacked by invaders, who are repelled by a humanoid weapon called a Dolem. During the chaos, Ayato Kamina meets Reika Mishima, a classmate. During that same day, he is attacked by government officials but a woman named Haruka comes to his rescue, informing him that she was sent to get him by the Organization TERRA, and that Tokyo had been sealed in a time rift where time flows one third as fast as the outside world. He flees from Haruka onto a train where he sees Reika once more. Arriving at the Room of Rah, he follows her to a tremendous egg where the Dolem RahXephon is hatched from, and upon her singing his mother appears atop the Dolem that had stopped the TERRA Invasion. In the battle Ayato's mother is injured, and Ayato flees Tokyo Jupiter with Haruka. 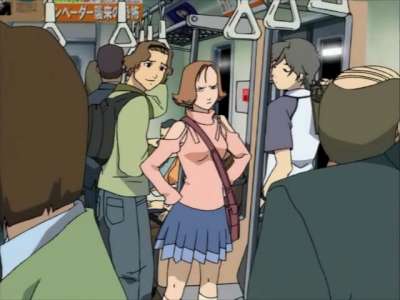 Invasion of the Capital

On Tokyo Jupiter, a 17yr old boy, name Ayato, is living a normal life until, Tokyo Jupiter is attacked. When Ayato is saved by Haruka, Ayato cracks an egg which released a structure, known as RahXephon, to fight against Mu. 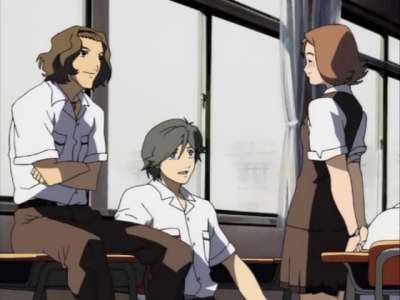 RahXephon is awaken by Mishima Reika, he helps out by battleling the D-1. Ayato woke up at the hospital forgetting what has happened. His mother pretends to not know what he talked about. When the D-1 was recovering in the labotory, Ayato met Haruka to know the truth, Haruka wanted to go back to the real world, but Mishima summoned RahXephon. RahXephon destroyed the D-1, discover that her mother has blue blood and went to the real world by passing the barrier. (Sypnosis came from www.animeinfo.com) 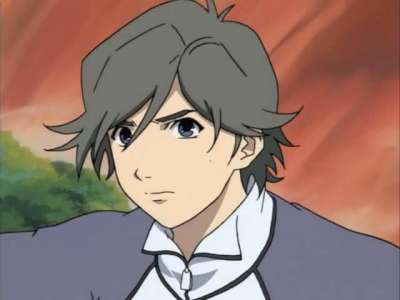 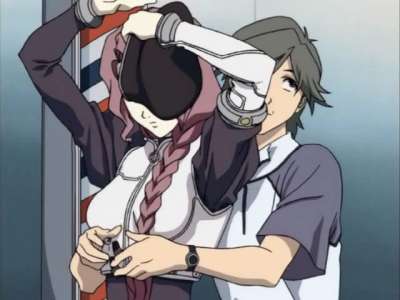 Ayato and Haruka now arrives in Litya City, along with RahXephon, and now Ayato and RahXephon are being researched, while Ayato Meets Quon. Meanwhile Haruko is confronted by Elvy, the only other survivor from the Battle on Tokyo Jupiter. During the test Ayato is found our to be a Murian and is locked up for it by order of King Kunugi. And then Litya gets attacked by a Dolem. And Ayato must save Terra from the Dolem. After eliminating the Dolem, Ayato hands over the Rahxephon to Terra where it can be taken care of by Dr. Itsuki 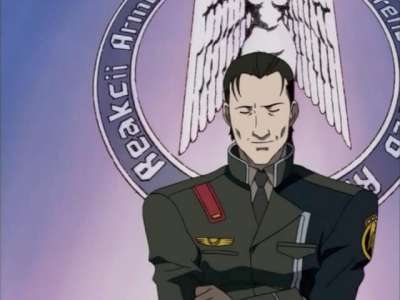 Ayato is tested and found out to be normal, minus the symbol on his torso, Quon has one as well. While Ayato meets, Soyoko a co-worker and finds out he will be living with Haruko and her sister Megumi, and their uncle Rikudo. Meanwhile Itsuki finds out, that Quon is his sister. When Ayato is unpacking, he finds Buchi, which Quon packs for him. And after the dinner Rikudo gives Ayato a name plate. 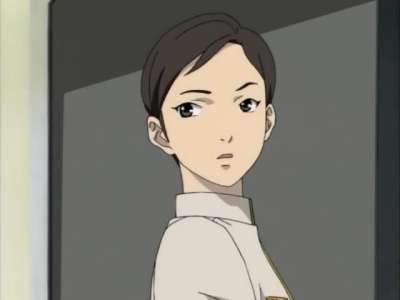 14 Years ago a Dolem apppeared. Now the same dolem is back, and killing people in Australia. Kim Hotal get's an unauthorized sound bite due to the fact that Dolems use these sounds for their attack patterns! Now, Terra must wait for the Dolem to appear, and Ayato must be ready to attack. And when it does, Can Ayato win? Ayato comes out the winner! 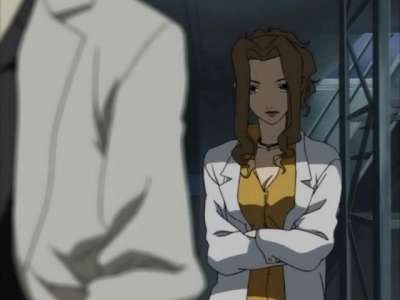 Watari and Kunugi are coming back to Nirai Kanai, with an Yamato Communcations reporter, Futagami. While coming to Terra is the Alpha Squad, who join with Elvy to take the place of her killed/wounded colleagues. Meanwhile, Futagami goes to Rikudo's place, to find information for Ayato. And when Alpha Squad and RahXephon attack a giant Dolem, it releases smaller dolems. And Ayato must defeat it and does. 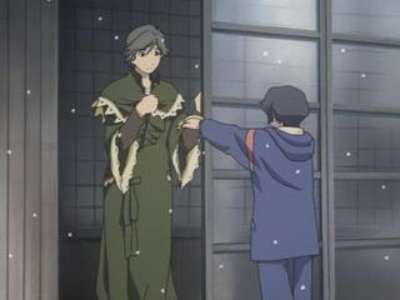 Itsuki finds a stone, while examining the Dolem that was defeated in the prior episode. Itsuki takes that stone and gives it as a gift to Sayoko, for Christmas. After, he goes to the beach and invites Ayato, Megu, and Haruka and the others to a Christmas Eve Party. And it begins to snow. While Megu and Kim are shopping Megu talks about Haruka, while Haruka gives Ayato gloves. And a Dolem appears to freeze everything. And RahXephon and Ayato must defeat it, but there's a problem, Sayoko is a part of it. And it's up to Ayato to save christmas for Nirai Kanai. When it looks in doubt, Ayato thinks of Haruka and the gloves he gave her, and saves the day. B-Storyline: Quon stays in bed under her blanket, because she hates the snow. 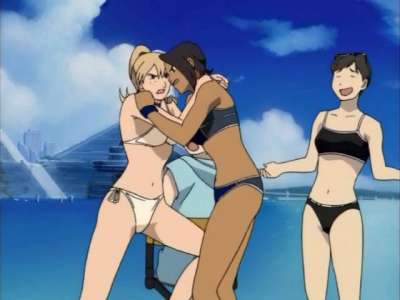 After Celebrating New Years, it's back to the beach. Quon wanders off, and Ayato follows her. They come up to ruins located in the forest. Apparently Quon and Ayato go missing, and and Haruka starts a search to find them. Quon and Ayato are off somewhere, and Haruka's search was stopped due to the fact they were no where to be found. Haruka ends up back at the ruins, where Quon and Ayato reappear in front of her again. B-story line: While Ayato and Quon are missing, Itsuki tries to pilot the RahXephon, but fails to do so. 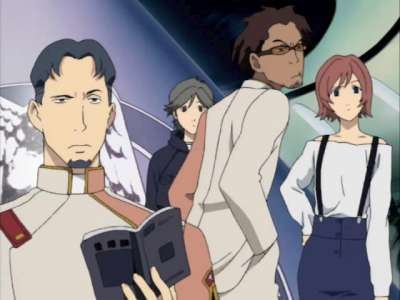 Kunugi takes the day off. Quon visits him and plays some music for him, but its incomplete. She goes a little crazy because the song doesn't have an end. Meanwhile, Kunugi goes on a ship for a birthday date, talking to his former wife. She says that he didn't spend enough time with his daughter, using work as an excuse. She gives him the last part of the music. His daughter wrote the music for him. It's her birthday, but she's dead. He visits her grave. Quon finishes the song.

Considering this is the joint creative works of Gundam and Evangelion staff with Studio BONES - carefully crafted over two years - it should be no surprise that this was destined to be brilliant with so many talented veterans behind it. The creators - mostly composed of artists - wished to bring mecha to a modern age, and managed to do so with ultra-clean character design, and elegant; almost "effeminate" mechanical design. Story takes hints from classical literature - in a setting that delicately weaves myth and extinct ancient Aztec culture into a futuristic struggle for dominance of the planet. A strong musical influence ties in to all aspects of the show; even the sci-fi elements are accented with many musical references and jargon. The themes of love, atonement, time travel, and escapism are used to drive the drama between the characters; the motivations of everyone in the cast are believable and enjoyable to unravel, and the obvious and hidden connections between the characters is surprisingly great.  Infact, this series has immense replay value as you can discover easter-eggs of information that once appeared meaningless on your first watch - things that "make no sense" at the time make *perfect sense* as you grow to understand the characters, and certainly rewards people who remember the significance of subtle glances and body language between chars. The series itself is a puzzle that is constructed on screen and also mentally in your head. Of course, a show about music would be damned if it didn't have excellent music itself. The quality of the score is definitely one of the production highlights along with its animation and art direction. It's a fantastic expression of art on multiple levels. On the downside, there's some suffering from low budget. Some scenes are lavishly afforded plenty of frames and silky smooth animation, while others are recycled cels or inexpensive placeholders for something that ought to be much cooler. The final scenes are case-in-point; very cool; but not enough spent on them. The art style itself varies minutely from episode to episode, with animators showing their own style in places. It can get weird, but its usually okay. If you just wanted an action-packed Sci-fi mecha as brainless as Transformers, you're going to feel disappointed. This should appeal to anyone who is moderately artistic.

Reality is a concept that has been used in various medium to explore many interesting concepts, not to mention how we as humans view reality. What isn't mentioned as frequently is how people try to run away from reality. This varies from seeing images of people that aren't real (focusing too much on positive or negative aspects of a person instead of seeing the whole picture), seeing the world either extremely positively or extremely negatively, or simply running away from interacting with people for fear they might hurt you. This is a fascinating concept that has been explored in many other anime series, from Neon Genesis Evangelion to Lain. What is different about RahXephon, however, is the way that it views that running away from reality may not necessarily be a bad thing, if it can help the people around you and accomplish something better for many people. This is treated with a great deal of ambiguity and is left morally grey for the viewer, and it wouldn't work if it wasn't for this show being excellent in presenting its story. The story is very distinct from many mecha series, and while there are undeniably massive influences from more popular mecha shows, the show soon develops an identity on its own and doesn't attempt to clone elements that simply were fit for those particular shows. The show is extremely rich in themes, from Mayan mythology to music to perception of reality and there is a lot of depth to sink your teeth into. The show is extremely skilled at making the viewer curious about the overall pieces of the plot, showing all of the clues and not holding the viewer's hand or lecturing them about plot details but instead using the absolutely stunning animation quality and various imagery to tell the story, and it works extremely well. The characters are all developed and almost none of them fall into archetypes that plague the genre. They are all distinct and multi-layered, which is very refreshing. Their actions always make sense, and they never act inconsistently or out of character, although many character actions require a rewatch to fully understand. The artwork looks gorgeous and the character designs are an absolute beauty to look at. The backgrounds and the scenery present throughout the show is beautiful to look at, which adds wonders to the show's tone and makes the show's presentation all the better. I cannot praise the absolutely amazing soundtrack enough, which fits the mood of the show, has extremely high hearing value outside of the show, and the various tunes present in the show which fit the mood so well and never feel out of place. This show has one of my favorite soundtracks out of anime and I honestly adore it to pieces. This show is underrated and under-appreciated, and while the show appears to be very unoriginal initially it quickly becomes very distinct and stands completely on its own. This show deserves more attention and I honestly recommend it a lot if you want a very different experience from your typical mecha anime.

Start a new discussion for RahXephon anime. Please be fair to others, for the full rules do refer to the Discussion Rules page.