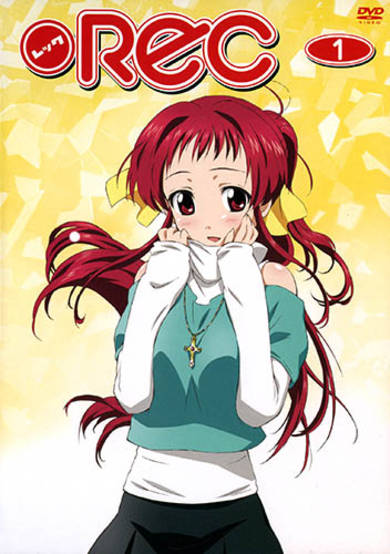 Fumihiko Matsumaru is an average salaryman with no girlfriend. He invited his colleague Miss Tanaka to a movie but was stood up. Right at the time he was about to toss tickets into a trash can, a cute girl appeared and asked him not to waste those two tickets. After movie and dinner, he escorted her home and found they live in the same neighborhood, yet unfortunately her apartment caught on fire hours later. Having nowhere else to stay, rookie seiyuu Aka Onda moved to Matsumaru's place, and the two had started a "more than friend but not yet lovers" relationship under the same roof while keeping this secret from their employers. (Source: ANN) Fumihiko Matsumaru anxiously awaits his date to arrive in front of the movie theater. Realizing she is late, He crumples the movie tickets and prepares to throw them away. He then "hears" the voice of the tickets telling him not to throw them away. Actually, it was a girl who was dubbing the voice of the tickets. He gives one of his tickets to the girl and they watch the movie together. Matsumaru realizes that the girl is reading the subtitles of the movie out loud and concludes that she is just weird. While exiting the theater, Matsumaru finds out that his date ditched him for another man and thus is accompanied by the girl for Yakitori and Beer. Matsumaru finds out that the girl lives almost next door. In the middle of the night, he wakes up to find the girl's neighborhood in flames and convinces her to stay in his house. For some reason, they kiss. The girl introduces herself as Aka, shortly before they make love and fall asleep. 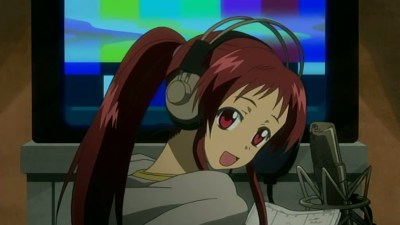 The next day, Matsumaru learns at work that his marketing concept "Nekoki" (a cat-tree) has been approved as the mascot of a snack product called "Ha". Furthermore, Aka is chosen to voice nekoki. They decide to keep their live-in relationship a secret from their employers due to Aka's worries about an appearance of impropriety. She also insists they are not a couple just from having slept together once in a moment of weakness, and that she will merely be lodging with him. The series is heavily concerned with the developing dynamic of their relationship. 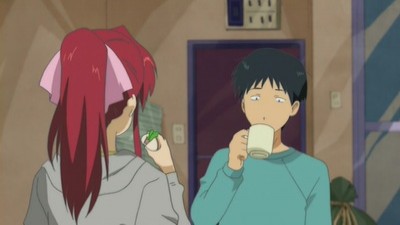 The episode deals with Matsumaru realizing that he has let a total stranger into his house. It also has two flashbacks to when Aka and Matsumaru were at high school. Aka's flashback has her friend commenting on how great it would be to hear Aka's voice on TV. Matsumaru's flashback has his friend tell him that Tokyo girls are easy, a comment that Matsumaru refutes after he is once again struck by Aka for trying to kiss her. 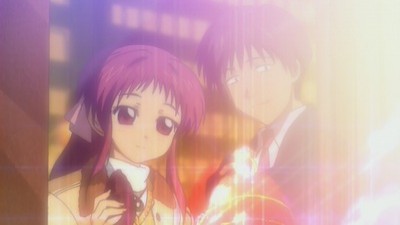 After a shaky start when Matsumaru walks in on Aka on the toilet the two of them go and launch their advertising campaign. It starts badly but, after a little girl recognizes the voice and the character their spirits are lifted. Afterwards, Aka cries with happiness at her voice being recognized. 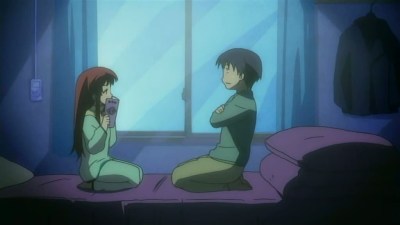 Love in the Afternoon

Aka is having trouble with her current job because she is voice acting in an H-game. She struggles with the words and eventually asks Matsumaru. He initially misunderstands her intentions but realizes before he does anything stupid. After successfully completing her job, Matsumaru buys the game but it is confiscated by Aka and he is banned from playing it. 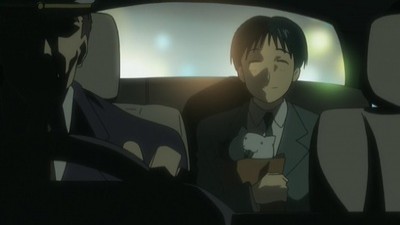 After an incident involving underwear on live television, both Aka's and Matsumaru's careers take a boost. This causes friction, culminating in Aka saying once she earns enough money she will leave causing both of them to get depressed. Aka's depression affects her performance on one of her jobs, but she manages to get the lines right after remembering her feelings whenever Matsumaru came home. The episode ends with Aka crying alone and wondering if she can return to Matsumaru. 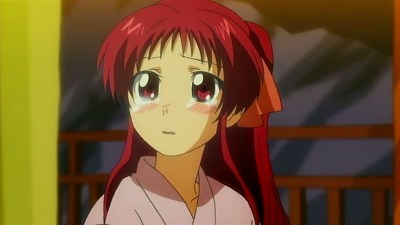 In this Episode, Aka and Fukihiko take a trip to the hot springs. They each enter one side of the same springs and find each other naked, much to their dismay. As Aka's career takes off even more she unintentionally misses a date she had planned with Matsumaru. That day things go bad to worse for him at work among other things and when he finally sees her late that night in the apartment his jealousy got the best of him and said some things he shouldn't have. 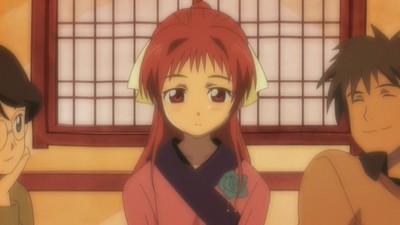 Two for the Road

Feeling guilty about what he said to her before Matsumaru tries to think of a way to apologize, but instead pushes Aka away even more thinking he's not worthy of her as she has become popular. That day Hatakeda takes him out for a night of drinking to cheer him up and end up in the same place as Aka and the people of the new anime series she's voicing. They express their feelings to each other and finally become a couple.

REC, the sweet little love story When I first found REC I wondered what it was. It's fairly short, (or even very short for an anime) it's only 10 episodes and they are not the normal ~20 mins, but rather ~10 mins. Which means it is quite short. However, the material is quite straight forward and are quite heart warming. We first start of with: Fumihiko Matsumaru, an awkward guy, at first sight at the very least. He seems to been stood up of a movie date with some girl or something. Not really important. In his misery of the knowledge of being stood up a girl shows herself citing lines from a movie. Enter Onda Aka. Onda goes to the movie with Matsumaru instead of just throwing the tickets away. Futher in it shows that Onda lives in the same neighbourhood as Matsumaru. After they say good bye Matsumaru goes back to his appartment. Later that night there is a fire, and unfortunately Onda appartment was on fire. Matsumaru invites Onda to stay with him for the night which she does. And this is how the show begins. You might be thinking, oh, sounds fishy, and like a cliché. Maybe. It's a little bit as that. However, as the show progresses the feelings of affections they show each other is so heartfelt that I melt myself. Since the show is so short we won't really have time for detours, everything is focused on their relationship and their jobs. Ah their jobs. REC's name is from the idea that Onda is an Voice actress. She works with recording her voice. Not that it's really important what she works with, but it's what she does. Matsumaru works at a snack company as a salary man. While this two jobs is arbitrary for itself it works itself quite nicely into the story and some hardships. The one who watches will see. The two stars are really only Matsumaru and Onda. The only two important other characters are Matsumaru's work friend and Onda's manager. They round up the cast so that we can focus on the two real stars. And speaking of them, I like them. Matsumaru is kind, but also complex and parhaps a little childish. Onda don't really stop to take a breath and see her surroundings. Sufficient to say they are not one dimensional. Should you get it? Definitely. The show is short so you can go through it in a couple of hours. And you will be glad and feel fulfilled afterwards that you walk away with a smile. Personally, I watched it all on one evening.

Start a new discussion for Rec anime. Please be fair to others, for the full rules do refer to the Discussion Rules page.