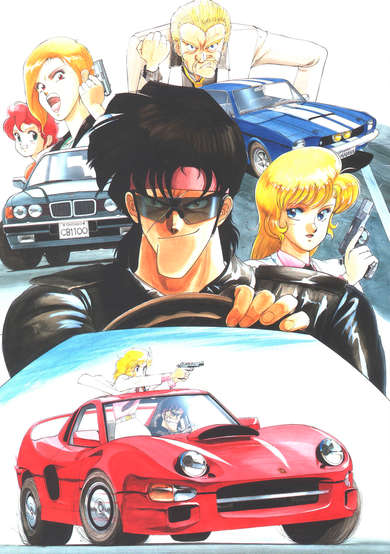 Bean Bandit and his partner Rally Vincent are couriers for hire - transporting clients and delivering goods in his custom sports car "Roadbuster" for a hefty price. But when they are hired to escort a kidnapped girl named Chelsea to her home, they don't realize they're being framed for kidnapping as their former clients Semmerling and Carrie plan their escape with Chelsea's father and the ransom money. (Source: ANN)
User Count1765
Favorites Count10
Start Date22nd Feb 1989
Next ReleaseInvalid date
Popularity Rank3732
Rating Rank4333
Age RatingR
Age Rating GuideMild Nudity
SubtypeOVA
Statusfinished

Ever imagined an anime version of "The Fast and the Furious"? Well, me neither. But if there was one, it'd probably be something similar to "Riding Bean" (okay, I concede "Initial D" might be a more obvious choice, but I haven't seen that yet)."Riding Bean" is about cars. Cars, gangsters, and more cars, to be exact. All the action centralises around fast and furious car chases down the highway, or the main character (nicknamed "Bean Bandit") doing some incredible things with his incredible sports car (named "Roadbuster" - you just know it's a badass car because it has a name) to get him out of what seem to be impossibly tight spots. The action is very satisfying for the most part, but does get a little \*too\* over the top - by the end, this Bean Bandit guy was dishing out carnage comparable to Superman.While "Riding Bean" is an action heavy OVA, the story is surprisingly clever, as it has more than its expected share of twists and turns that kept me guessing what was going to happen next. That said, the story is sometimes compromised by the OVA's appetite for over the top action. For example, I'd hardly think people who are attempting to get hold of a captive from a car would resort to shooting the car with anti-tank guns in order to try and stop it.On the animation side of things, "Riding Bean" does well with its great action sequences. However on the negative side, there's something weird about some of the character designs that I can't quite put my finger on. Perhaps it's that ginormous chin sported by the Bean Bandit... I just can't get over it.I gathered from other reviews that "Riding Bean" is considered the prototype of "Gunsmith Cats", as the two share the same creator. I can certainly see the resemblence in the style and setting (as well the fanservice), and in fact, the two both feature the character Irene "Rally" Vincent (something that I didn't pick up at the time). The general consensus seems to be that "Gunsmith Cats" is superior to "Riding Bean", but I have to disagree. I thought that "Gunsmith Cats" feels a bit stale, and does not really standing out in anyway. On the other hand, while there are times when it seems like "Riding Bean" doesn't quite know what it wants to be (at one point I thought it was gonna go down the perverted path, but the moment passed without amounting to anything), it has a much more nifty plot and action that gets the adrenalin pumping a lot faster. Overall, it's a well spent hour I'd say.

Start a new discussion for Riding Bean anime. Please be fair to others, for the full rules do refer to the Discussion Rules page.