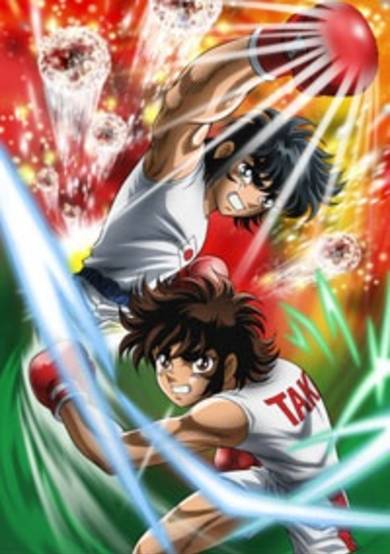 In order to fulfill their dead father's wish, the siblings, Takane Kiku and Takane Ryuji aims for the champopn title of the boxing arena. The sister, Kiku, will act as the trainer while her brother, Ryuji, will concentrate on the role of the boxer and learn the Boomerang. His battle with many rivals has led to the growth and maturity of Ryuji. The junior high boxing tournament has began and Ryuji will be fighting with his arch-rival, Kenzaki Jun. The battle begins. (Source: ANN)
User Count414
Favorites Count1
Start Date6th Oct 2004
Next ReleaseInvalid date
Popularity Rank6851
Rating Rank5991
Age RatingPG
Age Rating GuideChildren
SubtypeTV
Statusfinished

Thy name is Boomerang

MaxLemon's Challenge Ring ni Kakero 1 Where do I even start... Ok so the show starts off with a boxing match. What kind of boxing match? A boxing match that draws tens of thousands of people, the kind of boxing match that has people lined up outside. That's right a MIDDLE SCHOOL boxing match (we all go to these kinds of boxing matches don't we). This is obviously ridiculous made even more so by the fact that the 2 fighters put freaking UFC fighters to shame in terms of size and muscle. They have some history with each other making them rivals. They are fighting in a normal match, UNTIL white gloves unleashes a punch that literally sends a beam of light into space..... Wow, what power. Then they do their best impression of DBZ and are attacking so fast you can't see it. White gloves sucker punches red gloves and then he gets knocked out, two spectators in the crowd who are acting like mafia members are guessing like they know everything, which they don't and they look like dumbasses when they are proven wrong. And then they roll the credits....I'm not kidding.

Start a new discussion for Ring ni Kakero 1 anime. Please be fair to others, for the full rules do refer to the Discussion Rules page.