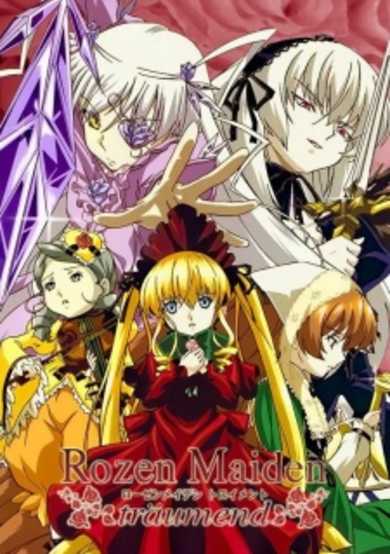 As summer break arrives for the students, Jun Sakurada is busily studying on his own in the library, making up for time lost while he had confined himself to his home. Meanwhile, his Rozen Maiden doll, Shinku, has been having troubling dreams of late. The pain and sadness of defeating Suigintou was overwhelming, despite the inevitable battle they waged. After waking suddenly from a nightmare, she finds Suigintou's companion spirit wandering; upon giving chase, she discovers that the seventh Doll-- Barasuishou-- has awakened. She now realizes that Suigintou's fate may very well befall the other Dolls, for the appearance of the last Doll signals the beginning of the end of the Alice Games. (Source: ANN)
User Count6887
Favorites Count30
Start Date21st Oct 2005
Next ReleaseInvalid date
Popularity Rank1627
Rating Rank1791
Age RatingPG
Age Rating GuideTeens 13 or older
SubtypeTV
Statusfinished

Jun tries to catch up with his past due school work in order to re-enroll. Everything appears to be as it was before until Shinku begins having nightmares about Suigintou, and another doll named Barasuishou is introduced.

The appearance of the seventh doll indicates that the Alice Game might end soon. The only problem is that Shinku thinks Barasuishou is lying about something. Jun worries about Shinku and visits the doll maker, Enju.

Kanaria, who is the second doll of the Rozen Maiden, appears with a plan to steal Shinku’s Rosa Mysticae.

Jun and the dolls end up in Barasuishou’s world. Suiseiseki and Jun form a contract together.

Suiseiseki sets out to gain Jun’s respect. Souseiseki tries to maintain order in the house, and Kanaria attempts to break in again.

Megu is hospitalized with an incurable illness and, while she wishes for death, enters into a contract with Suigintou.

Souseiseki begins to see a deeper meaning of the Alice Game. Kanaria decides to fight to keep her medium happy and to keep herself alive.

After seeing Enju and hearing his feelings about the dolls, Jun questions his own feelings for them as well. Souseiseki soon understands the meaning of the Alice Game.

Souseiseki and Hinaichigo both face a tragic fate. Mourning must be delayed, as a trap has been set for Jun and the remaining dolls.

Start a new discussion for Rozen Maiden: Träumend anime. Please be fair to others, for the full rules do refer to the Discussion Rules page.