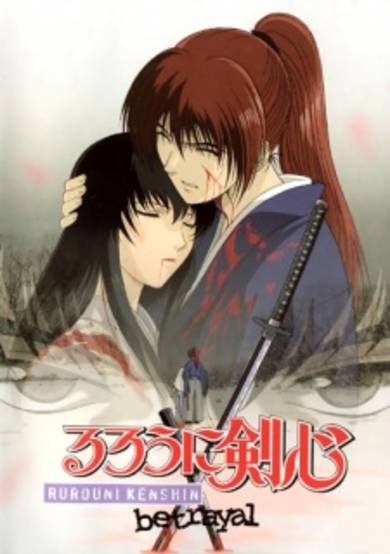 When mankind's savagery surpasses his fear of death, there is little hope for those who wish to live honest lives. Beneath a full moon, a young boy witnesses the murder of the bandits who had enslaved him, and is then christened with a new name by the man who rescued him. This boy is Shinta, now known as Kenshin Himura, and he is destined to become a swordsman. The softness of his heart does not befit the occupation, but his desire to protect the innocent is absolute.Rurouni Kenshin: Meiji Kenkaku Romantan - Tsuioku-hen details the origins of the man who would bear the name of Hitokiri Battousai long before he swore his oath not to kill and before he earned his reputation as an assassin. The young man’s heart is divided between justice and corruption, while the fate of a nation rests on his actions. [Written by MAL Rewrite]
User Count28892
Favorites Count460
Start Date20th Feb 1999
Next ReleaseInvalid date
Popularity Rank351
Rating Rank247
Age RatingR
Age Rating Guide17+ (violence & profanity)
SubtypeOVA
Statusfinished

The Man of the Slashing Sword

Episode of how Kenshin came under the wing of Soujiro Hiko the 13th, how he was trained and how he became a manslayer.

The second episode details Kenshin's role in the revolution, how he met Tomoe, and how the rebellion was almost quelled.

The Previous Night at the Mountain Home

The third episode details how Kenshin lived with Tomoe and married her as a cover until his side replenished its forces to continue the rebellion.

The fourth episode is about the betrayal against Kenshin, how he lived for the next few years as a manslayer, and the origin of his cross-shaped scar.

Perfection is (probably) unattainable, but once in a while, an anime comes along that gets pretty damn close. "Rurouni Kenshin: Tsuikuhen" is one such anime.I originally watched "Rurouni Kenshin: Tsuiokuhen" without watching the main series. I was drawn to the OVA's by its stella ratings, but was too daunted by the length of the main series to watch that. Eventually, I grew out of my allergy for long series and watched the 95 episodes of "Rurouni Kenshin". Coming back to this afterwards, I wished I wasn't so hasty to watch it before - as good as it was first time round, it's much more meaningful after the series, and it would have been great to experience this stunning piece of work to its full potential on the first watch.\[Note: For the remainder of this review, I'll be assuming that, unlike me, you were sensible enough to have already watched the series before coming to this, so there might be some references to the series in this review\]"Rurouni Kenshin: Tsuiokuhen" (or just "Tsuiokuhen" for short,) is the story of how Kenshin became a swordsman, how he took part in the revolutions, and how he came to get his cross shaped scar. It's the chronicling of the making of the manslayer before his later years as a pacifist, and of his first love that was hinted at in the series.Stylistically, "Tsuiokuhen" is a compeletly different beast from the main serie: gone are all the comedy elements - this OVA is deadly serious, and not for the faint hearted. It opens with a brutal, shocking prologue involving a bandits' attack on slave wagon. Men and women are cut down alike, swords are put through throats, and blood sprays in abundance. The violence is graphic, but not gratuitous.Admidst the slaughter, it's hard not to notice the beauty of the artwork and the fluidity of the animation. The realistically designed characters reflects the serious tone, with no super deformity nor traditional big-eyes-small-mouth style in sight. Visually, "Tsuiokuhen" is just incredible.Contrary to the impression given by the prologue, "Tsuiokuhen" is not at all heavy on action. The mood in this anime is often subdued (in fact I found some of the voice acting to be a little flat), and there are plenty of quiet moments, such as Kenshin's brief stint at living a peaceful life in the countryside, that acts as a counter balance against the action. The story also contains a lot of political elements as it describes the power struggles that went on prior to the revolution. There are plenty of references, linking together a great number of events, a lot of them real historical ones relevant to the Kenshin story. It can be quite thrilling to see some of these events click into place, and it always excites me to see cameos from significant characters from the series such as Hajime Saito (who, unfortunately, doesn't look as wolfish as he does in the series), but some of it went over my head. My knowledge of of Japanese history is extremely limited, and a portion of the political backstory involving real historical figures that are less directly related to the Kenshin felt a little redundant and confusing.What really matters is the backstory of Kenshin himself. This short OVA series covers the key parts of Kenshin's early life; their importance in shaping young Kenshin's character and their influences on the choices he makes later in life cannot be overstated, but you'll need to have watched the main series to fully appreciate it. "Tsuikohen" is easily strong enough to be watched as a standalone, but without watching the main series, you won't know just how the young, brooding Kenshin contrasts against his more open, cheerful future self; nor will you pick up the deft touches added here and there that adds plenty of meaning and depth for those who've seen the series, such the hints on the consequences of Kenshin's actions.Everything comes together in an epic finale in the last episode, concluding a tale of love and vengeance, trust and betrayal in spectacular fashion. If I have any nitpicking to do, it would be that the gauntlet that Kenshin was made to go through seems a little too contrived and shounen in style for a show with such mature vibes. I doubt many people will give a monkey's toss about that, however, as the polished action and the torrent of emotions peak simultaneously to create a breathtaking climax.Fast paced action, achingly beautiful romance drama, depth of character and story, "Rurouni Kenshin: Tsuiokuhen" has it all (apart from comedy). Just make sure you watch the "Rurouni Kenshin" main series up to the end of the "Legend of Kyoto" arc if you want to appreciate this OVA to its fullest. Believe me, it's worth the effort (and the series ain't half bad either).

Rurouni Kenshin: Meiji Kenkaku Romantan - Tsuiokuhen is originally a flash back in the manga of the story of rurouni kenshin and quite frankly I have to admit that its better then Rurouni Kenshin: Meiji Kenkaku Romantan despite being only a 4 episode ova. the atmosphere and art were totally different and more importantly far more superior.Storythe story is very simple as it was not much too their but it is enough to full up an 4 episodic show. The theme is dark and gory but whats you will expect of a true samurai show. warriors fighting for the believe or the cause money and glory with no hesitation to kill each other off.artthe art was simply amazing with great animation. the colors might be not very bright but it does its job in this dark anime. the characters great and unique and they weren't looking as those Kyoto Animation characters (Thank good) Soundthe music was okay and fitting. the voice actors were great, not much they say on this.CharacterI liked this kenshin alot better then the kenshin he is now. This one was serious and would do almost anything to survive in fights. He would most likely kill off his opponent with a real sword instead of sparing them and fighting them with reverse sword. Tomoe was far more likable character then kaoru because is she was well composed lady and didn't took up screen time annoyed us. EnjoymentI fond this really a great series to watch. As I mentioned earlier, the show is really dark and gory plus it shows how the Rurouni Kenshin series should have really been.OverallI would recommend this all people who loves action and dark gory anime. But I also would recommend too watch the main show, so you can experience that with out any disappointment and then be more amazed watching this.

It has been a couple of years since I watched the original Rurouni Kenshin anime on Tv and no more of a couple of months since I discovered that the last part was all filler, so i look it up and find out that there are OVAs that i never heard about, so finally I was able to watch this prequel arc and by god it was awesome. This is what i call "Anime Perfection". A dark and brutal look at how Kenshin Himura becomes Hitokiri Battousai and the birth of the X mark in his face. An amazing ad up to the main story and a reminder of how brutal kenshin world is. I'm glad i was able of see this finally. If you like the original series this is something you don't wanna miss at all

If you want continuous orgasms while watching an anime... This is what you should watch..

Whatever people like about this one I guess I'm missing it...the characters are boring, the art is inconsistent, and it is the most depressing, contrived, predictable and pointless plot line I think I've ever encountered in an Anime. I pretty much hated everything about it... least favorite anime I've ever watched.

Start a new discussion for Rurouni Kenshin: Meiji Kenkaku Romantan - Tsuioku-hen anime. Please be fair to others, for the full rules do refer to the Discussion Rules page.