Shuuji and Chise are third year students at a high school in Hokkaido. The shy Chise is finally confessing to Shuuji, and finally the two of them are starting to exchange diary awkwardly. One day, Shuuji tries to escape from a sudden enemy air raid on Sapporo. While desperately escaping from the air raid, Shuuji sees a scene that he could not forget for his life. He sees Chise, with a huge weapon looking as if it was part of her hand, shooting the enemy fighters down one by one. Apparently, Chise is the ultimate weapon with destructive power which is important for the war. (Source: AniDB)

We Fall in Love

Shuji and Chise have recently begun dating, but Shuji is a bit doubtful about his decision. However, they manage to patch things up and give their newfound love another chance. When Shuji goes to the Sapporo mall with his friends, a group of unnamed bombers attack the city. Injured, Shuji tries to get up only to discover Chise's darkest secret... 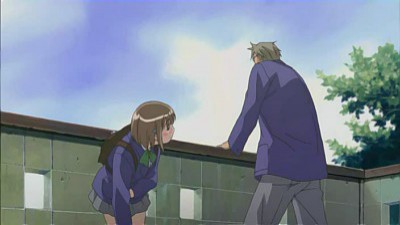 Shuji and Chise have recently begun dating, but Shuji is a bit doubtful about his decision. However, they manage to patch things up and give their newfound love another chance. When Shuji goes to the Sapporo mall with his friends, a group of unnamed bombers attack the city. Injured, Shuji tries to get up only to discover Chise's darkest secret... 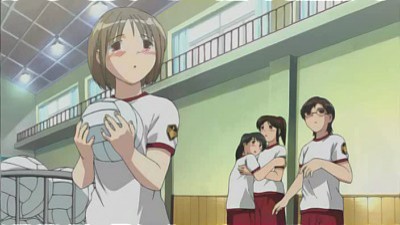 Shuji tries to act as though nothing happened after finding out Chise is the Ultimate Weapon. When Chise tearfully confesses that she's only getting stronger, they try to escape to freedom using Shuji's bike. 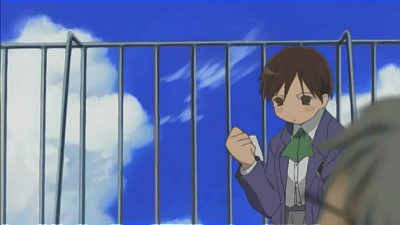 Shuji promises Chise that he'll be waiting for her at the train platform so they can both leave the town forever, but she is stopped by a military entourage. While contemplating about his relationship with Chise, Shuji sees a woman riding her bicycle that looks like his former teacher...and lover, Fuyumi. 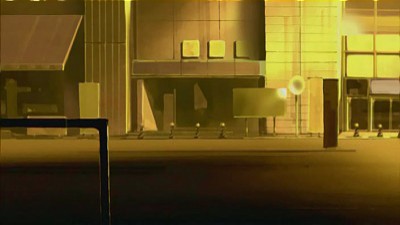 Shuji and Chise go on their first date to an aquarium. Shuji later goes to Fuyumi's house to retrieve his lost wallet, but has to face Fuyumi's seductive advances. In her military base, Chise meets Lt. Tetsu, a man who greatly resembles her boyfriend, Shuji. After a hard mission, Chise wakes up surrounded by a desolate wasteland and asks Tetsu to do one very difficult thing... 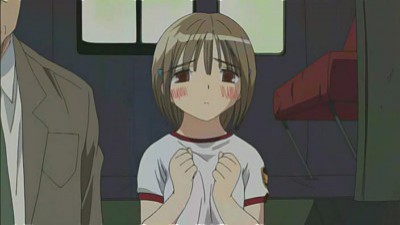 Tetsu follows Chise command, unflinchingly pointing his rifle directly at Chise's head, but stops after she voices her desire to live. In school, Chise senses an earthquake and Shuji desperately takes her outside the classroom so she can transform in secret. When the military helicopter picks her up, Shuji shouts to Chise to meet him tonight at the observatory. 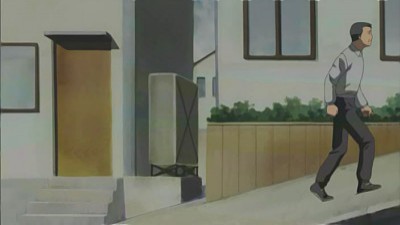 What I Want to Protect

Chise decides that they'd be better off as regular classmates, when she finds out that Shuji was once again in Fuyumi's house, breaking his promise to her. Atsushi reveals that he wants to join the military to protect the girl he loves, Akemi. 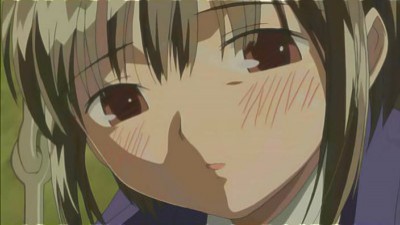 The war has finally reached their peaceful little town. Chise leaves Shuji a note in his locker, and she never comes back to school again. Atsushi wants to find out what exactly this new "Chise" weapon is, but no one wants to give him a straight answer. 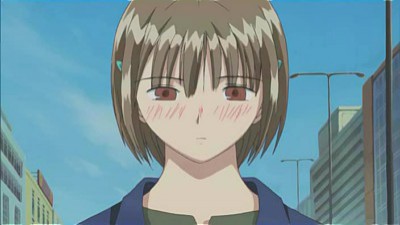 Yukari joins the neighborhood patrol to find the missing enemy pilot in the mountains. Tetsu treats Chise like a regular person and they go shopping together but end up cuddling and kissing each other. That same night, an earthquake hits their town. 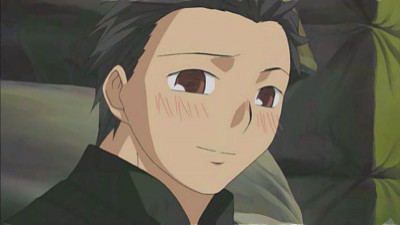 Chise didn't have maintenance for at least two days, and her physical condition has grown worse. Satomi begs Shuji to come to Akemi's room because she has been fatally injured...

"Saishuu Heiki Kanojo: The Last Love Song on This Little Planet", better known as just "Saikano", is a show that emboddies Gonzo's tendency to output anime that divides opinions. I shamelessly admit that I really enjoyed a lot of their shows... which is why I was drawn to "Saikano", a show regarded by many as an extremely tragic drama (note that this was before "Clannad" came around and made me forever wary of these type of shows), and by most critics as utter tripe.And so I went in with high expectations... and left with a glum reminder of why I have this contradictory love/hate regard for Gonzo - I have to say that those critics have got this one right.The first point where I suspected that "Saikano" isn't going to live up to my expectations is at the end of the first episode, when a seemingly straight forward love story takes a ridiculous (and ultimately not fully explained) twist, and the overly dramatic title - the translated english title that I didn't know about - flashed up on screen: "She, the Ultimate Weapon".I damn near fell off my chair laughing at the randomness of it all.The premises "Saikano" (or "She, the Ultimate Weapon" \*snigger\*) is, at first glance, ludicrous. And having picked this somewhat exotic, apocalyptic backdrop for settings of the story, I personally feel they should have fleshed out the background in order to prevent the whole thing from becoming unseemingly absurd. But Gonzo, not being renowned for the completeness of their world building, presented just a few bits of information, leaving the background of the story in a typically confusing mess.Even looking beyond that, the part that Saikano does show you is far from great. Instead of going for a convincing story, "Saikano" tries to force the issue, as characters and story are sacrificed mercilessly to fuel the melodrama, the angst and the sense of tragedy. You can almost see the places where the makers decided "ok, lets throw in another sad event here" - characters taking actions that comes straight out of the blue; fake feeling romances in which the participants seem more interested in hurting each other than anything else; plot twists that are random and senseless etc. In one scene, a bomb that exploded in the middle of three or four men conveniently killed all but one, leaving that remaining guy the opportunity to milk the scene further by grovelling around and crying over the deaths of the others.Those kind of examples are everywhere you care to look in "Saikano". At times the show practically shouting at you to cry, and it managed to achieve exactly the opposite of what it intended: it made me unable to sympathise with the suffering characters. Worse, some of the events and developments were so bizarre they had me laughing out loud at inappropriate moments. The mood is not helped by the background music, which often went for power ballad-esq electric guitar tracks to thicken the atmsophere. For the most part, they didn't work.Despite all this heavy handed incompetency, "Saikano" occasionally managed to strike gold - though more by law of averages than anything else. Some of the death scenes were quite moving, and, perhaps ironically, a short stint of happiness shared by the main characters in the latter half of the series manages to be more emotionally poignant than most of the sad moments put together. It's also one of the few times that the romance in the series isn't totally shambolic.Gonzo, either in the spirit of innovation or cost cutting, appear to have made a decision to hire 5 year olds for the visual design of "Saikano". I mean, what's up with those constant blush lines?! They make all the characters look as though they've just fallen over and scaped their faces on the gravel! As if this isn't bad enough, these blush lines also have a degree of independence from the character's faces - on a side view, you can often see the lines sticking out of them, like a mostache. Gonzo's reputation with CG is well earned though, as even in this crappy looking show it blends in well with the non-CG parts.If the quality of a tragic story is directly related to the amount of conscious effort put towards making it tragic, then "Saikano" would be one of the greatest shows ever made. But because it's not, it ends up inducing more tears of laughter than sadness with its forced, train wreck of a story. What IS sad though, is that I could have sworn I came across a couple of other anime with similar tones that were released soon after "Saikano" came out - as though it was being used as the blueprint for powerful drama. If that was really the case, then please excuse me while I go and face palm myself into unconsiousness.

Perhaps I've gotten spoiled with my anime but almost everything here seems average. Plot: Set around World War 2, a girl is unwillingly made into a weapon by a desperate government. You first thought might be why her? As with many other questions that will come with time not many are explained which leaves the plot a bit questionable. Animation: Realistic but dull. Not unwatchable but nothing really praiseworthy except possibly the more action filled scenes which are rare. Sound: Sometimes I feel the characters try a bit too hard to express an emotion, and it doesn't really work well. Other times the emotions were perfect, but overall it was mostly a tone of sadness, which gets a bit old and repetitive. Characters: The main problem with Saikano is that although they present a great situation to get your emotions stirred up, you have to get attached to the characters to do so, and I feel that Saikano's characters were all just a little too bland and normal. On one hand it feels more realistic, but it also makes it hard to get attached to them. I personally did get attached to them, but it felt as if I needed to make myself do so. Enjoyment: If you can get attached to the characters you will cry buckets, but with a rather dull cast, it makes it difficult at times. I can't blame you for skipping this one, but if your looking for something emotional and have watched tons of other stuff and don't have a problem empathizing with characters, you will enjoy it.

Best anime ever created. An absolute masterpiece of story and emotions, that catches you at the beginning, carries you through an amazing ride and leaves you crying satisfied when it ends. There is nothing better.

Start a new discussion for Saishuu Heiki Kanojo anime. Please be fair to others, for the full rules do refer to the Discussion Rules page.