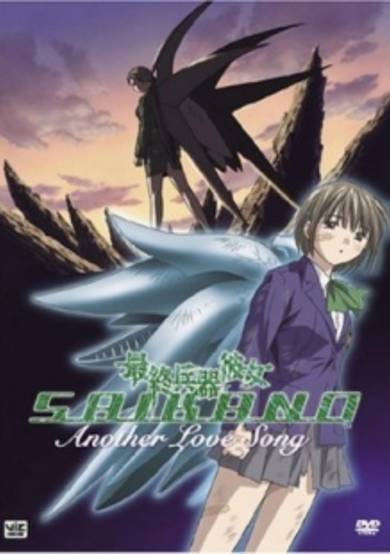 In the sky over Hakata city, fighter planes were flying and bombers are dropping bombs one after another. It became a sea of flames around Fukuoka Dome. At that time, a light appeared in the sky. In the shower of missiles, it intercepted enemy planes by its energy cannon. It was another “Ultimate Weapon”. In the meantime, Chise was suffered from the fact that she’d been turned into a weapon against her will, and she was thinking about Shuji. However, the army continued sending her to the battle fields. Whether another ultimate weapon is an enemy or a friend? This OVA will reveal another truth that wasn’t described in TV series. (Source: AnimeNfo)
User Count1606
Favorites Count1
Start Date5th Aug 2005
Next ReleaseInvalid date
Popularity Rank3890
Rating Rank4357
Age RatingR
Age Rating GuideMild Nudity
SubtypeOVA
Statusfinished

"Saikano: Another Love Song", being a follow up to "Saikano" (duh!) was probably doomed to mediocrity at best before it even began. Comprising just two episodes, it would have been hard for this set of OVA's to turn around the bad impression that the series left me with.\[Note: Contains possible spoilers for the main series since I'm assuming that you've seen it already if you're reading this.\]Perhaps due to shadow of the aforementioned bad impression of the series, I couldn't really get into "Another Love Song". No surprise there, then. But what is surprising is how vast the improvement this OVA is on the series.For starters, being an OVA, "Another Love Song" benefits from having better production values. The visuals are much improved, even to my untrained eyes. But ironically, the main thing that makes "Another Love Song" better isn't what it does, but what it DOESN'T do - it doesn't repeat the series' mistake of cramming in as many tragic scenes as it possibly can in an attempt to invoke emotions from the viewer. This makes the OVA's more believable than its predecessor... though that's hardly saying much."Another Love Song" introduces Mizuki, a crippled captain of the army (that's fighting that enemy who were never shown). More significantly, she is the prototype "Ultimate Weapon". Considering the original cast of "Saikano" consists of a bunch of angsty, irritating brats who were essentially puppets to the contrived story, Captain Mizuki is a welcoming addition, bringing a much needed air of maturity and sensibility. Her story fills in a lot of the details that were missing from the background of "Saikano". It's a job that needed doing badly, and it's a job the show does reasonably well. For example, it answers questions such as why Chise seems to be the only weapon of her kind (she isn't), and what was happening to her towards the end of the series.Of course, with only two episodes to play with, "Another Love Song" can only do so much. A lot of grey areas still remain - the sci fi is still mostly muddled, and the war unexplored. The story development, as much as it's smoother than the series, could have been better. Mizuki's change of attitude towards Chise seems sudden and groundless. The decision for the military commanders - who the anime was at pains to portray as cold and uncaring - to allow Chise to go to school and live like a normal girl is also baffling.Even though "Another Love Song" is short, it still found time to fit in yet another love triangle, one that feels like a tag on, like it was thrown in more for cementing its identity as a romance than any other purpose. Personally, I think the time could have been better spent filling in the ocean sized void in the story left by the series. Still, I have to say that "Saikano: Another Love Song" surprised me by being a decent watch... which is far more than what I can say for "Saikano: The Last Love Song on This Little Planet".

Start a new discussion for Saishuu Heiki Kanojo: Another Love Song anime. Please be fair to others, for the full rules do refer to the Discussion Rules page.