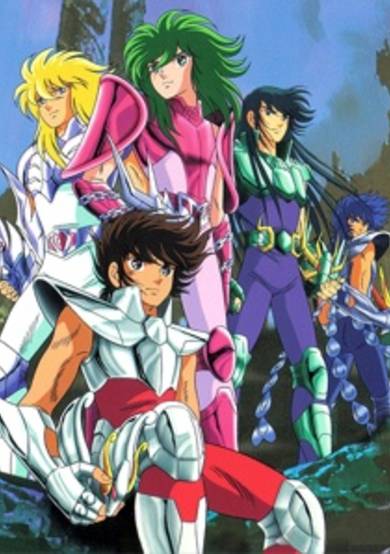 In ancient times, a group of young men devoted their lives to protecting Athena, the Goddess of Wisdom and War. These men were capable of fighting without weapons—a swing of their fist alone was powerful enough to rip the very sky apart and shatter the earth beneath them. These brave heroes became known as Saints, as they could summon up the power of the Cosmos from within themselves. Now, in present day, a new generation of Saints is about to come forth. The young and spirited Seiya is fighting a tough battle for the Sacred Armor of Pegasus, and he isn't about to let anyone get in the way of him and his prize. Six years of hard work and training pay off with his victory and new title as one of Athena's Saints. But Seiya's endeavor doesn't end there. In fact, plenty of perils and dangerous enemies face him and the rest of the Saints throughout the series. What new quests await the heroes of the epic Saint Seiya saga?
User Count7752
Favorites Count138
Start Date11th Oct 1986
Next ReleaseInvalid date
Popularity Rank1471
Rating Rank1575
Age RatingPG
Age Rating GuideTeens 13 or older
SubtypeTV
Statusfinished

Legends tell of young men, who wear armor known as Cloths and fight using energy known as Cosmos, and fight for the goddess Athena. They are known as Saints. In Japan, two Saints fight in a colosseum for an audience, with the host, Saori Kido, waiting for the Pegasus Saint. In Athens, Greece, a Japanese young man known as Seiya fights his rival Cassios, cuts off his ear and defeats him with his Meteor of Pegasus to earn the Pegasus Bronze Cloth. Later that night, before Seiya can return home, Cassios' master Shaina tries to kill him for revenge. Seiya wears the Pegasus Cloth and actually injures Shaina, but for a moment, he is unable to master the Cloth and his Cosmos. Shaina's men arrive to finish Seiya off, but thanks to his teacher Marin's advice, he turns the table and defeats her men with his Meteor of Pegasus technique. He also is able to break Shaina's mask to reveal her face. The next day, Seiya heads back to Japan.

Cygnus! The Warrior of the Ice Fields

Dragon with the invincible fist and shield

Miraculous Resurrection! The Cosmo of Friendship

Phoenix! The Warrior Who’s Come Back From Hell

Grave of Sacred Cloth – Shiryu is in danger

Start a new discussion for Saint Seiya anime. Please be fair to others, for the full rules do refer to the Discussion Rules page.