The Sanzo Ikkou continues its westward journey, on a mission to prevent a demonic resurrection. As Genjo Sanzo, Cho Hakkai, Sha Gojyo, and Son Goku fight their way to their goal, their path is fraught with internal strife. When they encounter a formidable pair of adversaries from the west, the cohesion of the group -- and the fate of the mission -- may be at stake. (Source: ANN) 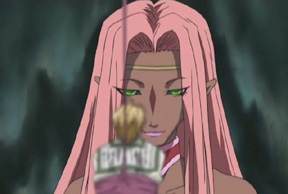 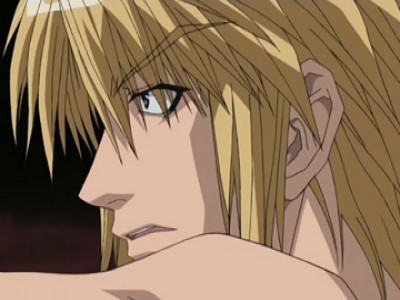 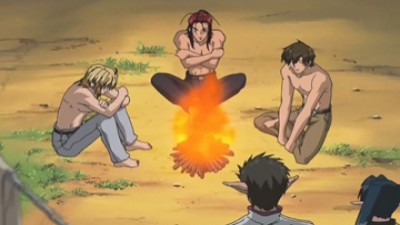 Swift Current ~against the stream~ 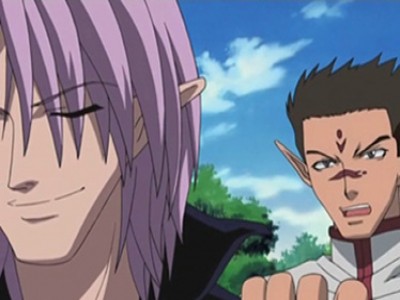 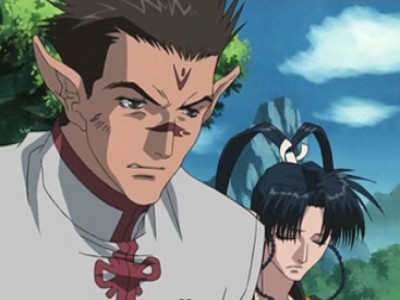 After a flashback to last ep, we see Sanzo asking Doku what he means about breaking through hypnosis, and cut to the throneroom of Houtou Castle. Yet another youkai flunky is polishing Lady GK's nails as she asks Dr. Ni about Kougaiji's progress. He should be back soon, he tells her. She hopes he's still showing the same good behavior, and Ni replies that Kou hasn't the strength to break through this hypnosis--he would have obtained the Maten Sutra long ago if he had. She chuckles, and says maybe she'll have him do her nails next. --Brainwashed? says Sanzo, and Doku bitterly confirms it, saying that right now, Kougaiji is nothing but a heartless killing machine. That [he says it as you might say 'that thing'] isn't Kou, he adds with great emotion. Gojyo rolls his eyes and says he's got to be exaggerating; and isn't he still your prince? Doku and Yaone look miserable, and Gojyo asks if that's why they advised the ikkou to just leave the sutra and run. Sanzo (looking much more irritated by his empty cigarette pack than by their news) growls "don't underestimate us", and Dokugaku actually--whoa!--grabs Sanzo by the front of his robe and hauls him up face-to-face. Don't misunderstand me, snaps the big youkai, I'm not worried about you guys--I just know Kou wouldn't want to win this way. Sanzo slaps his hand away and retorts that whatever, it's nothing to do with them. Straightening his robe =), he says that he kills anyone who gets in his way, and besides, he doubts their leader [he says taicho, "captain" =)] would want pity or surrender. Gojyo sighs and says, see, now our leader has always been a heartless killing machine. =)=) (And you're the one most in my way, mutters Sanzo.) Yaone sadly says that Sanzo-sama is right. Hakkai cautions that just dealing with the hypnosis may not be enough, as they may have actually tampered with Kou's brain. Doku resolutely says that they have to find a way to return Kou to normal; if they don't... And we see Lirin, naked, floating in some sort of nutrient tank, thinking in despair of her brother. As Dr. Hwang makes a note on her clipboard, Dr. Ni says he thinks they can progress to the second stage now. She's startled, but he heads out, handing her a note and saying "modify the chemical formula to this combination". Are you sure Lady Gyokumen Koushu said this was all right? Hwang asks, and Ni stops. Why are you even asking that? he says, and his lazy voice takes a sharp edge; if she's starting to feel guilty, he suggests, perhaps she'd like to go through the brainwashing herself... Goku struggles to his feet and faces the heartless killing machine (the redheaded one, not the blond one =), who begins to walk toward him. 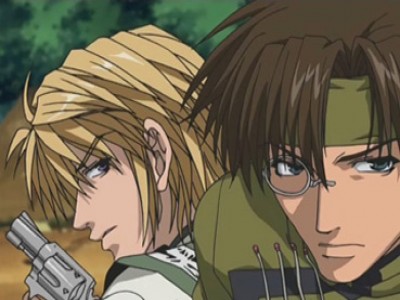 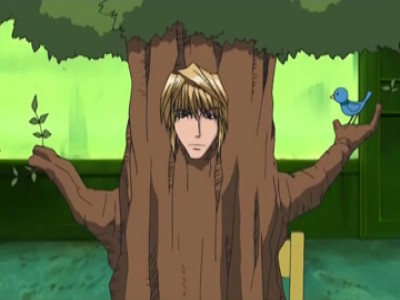 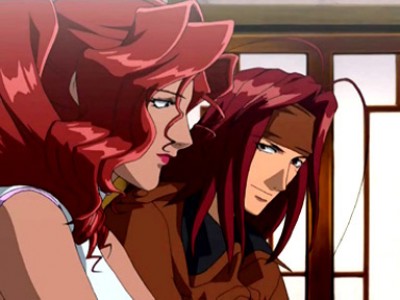 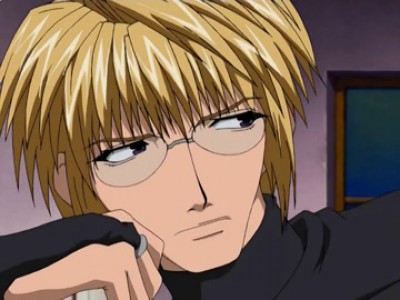 Start a new discussion for Saiyuuki Reload Gunlock anime. Please be fair to others, for the full rules do refer to the Discussion Rules page.