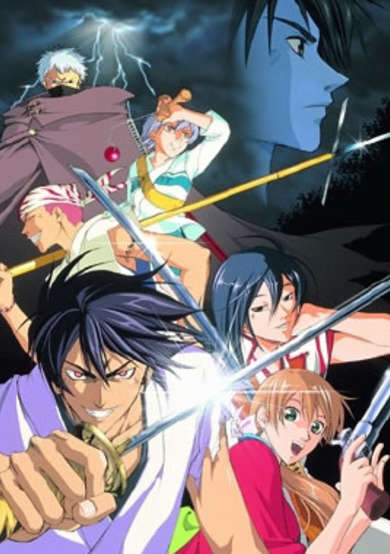 In the year 1600, at the fog-covered battlefield of Sekigahara, a fierce battle was waged by two exemplary swordsmen. One was Kyoushirou Mibu, a skilled and noble warrior in possession of the unique powers of the Mibu Clan. The other was the thousand-man slayer, with eyes and hair the color of blood, "Demon Eyes" Kyou. Their legendary clash was cut short when a meteor from the heavens fell down upon that battlefield, leaving both to vanish in its wake.Samurai Deeper Kyou begins four years after that battle, when a gun-wielding bounty hunter by the name of Yuya Shiina hunts down Kyoushirou—now a perverted, traveling medicine-man who has built up a large debt. On her way to claim his bounty, they are attacked by an inhuman monster that seeks to devour Kyoushirou. This encounter awakens "Demon Eyes" Kyou, whose mind has been trapped inside of Kyoushirou's body ever since that fateful battle. Thus begins a grand tale of legendary two swordsmen and the discovery of their secrets.
User Count3283
Favorites Count12
Start Date2nd Jul 2002
Next ReleaseInvalid date
Popularity Rank2661
Rating Rank6041
Age RatingPG
Age Rating GuideTeens 13 or older
SubtypeTV
Statusfinished 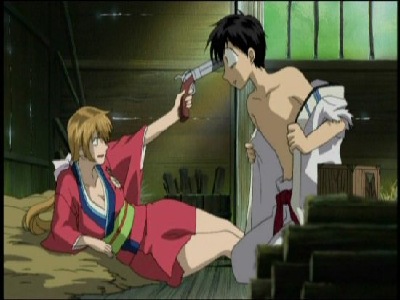 The Way to Armageddon

The first episode shows Kyo and Kyoshiro battling each other while Yukimura Sanada, Sasuke Sarutobi, and Saizo Kirigakure arrive at the battle ground where Kyo and Kyoshiro continuing fighting. Meanwhile, Kyo destroys Kyoshire's sword and tells him that he lost and should give up. Then, Yukimura comes and tells them to stop because Sakuya creates a meteor raining down on the battle field. Then four years later, Kyoshiro meets Yuki and then a demon attacks them. The demon was actually a guy who fought in the war four years ago. The demon beats up Kyoshiro, but Kyo takes over his body. Kyo beats the crap out of the demon and then Kyoshiro takes back his body and continues to travel with Yuki by his side. 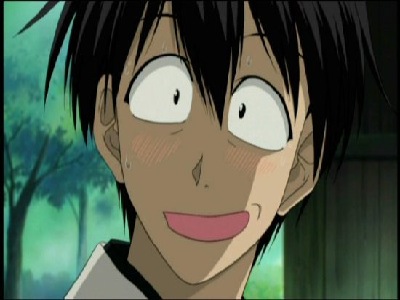 Jimon, the Kenyou recalls his past encounter with Demon Eyes Kyo at the Battle of Sekigahara. He was defeated easily, and terrified by Kyo's red eyes. Left for dead, Jimon was later obliterated by the falling star. Now as a Kenyou, he wants to crush Kyo and exact his revenge. Kyo uses his sword, the Muramasa and his special technique, Mizuchi to destroy him easily though. Afterwards, Kyo chases Yuya and eventually changes back into Kyoshiro. Kyoshiro explains that Kyo is not who he really is and decides to head out on his own. Yuya however will not let him, saying that she wants to help someone in need (although she is in reality, after the bounty for Demon Eyes Kyo). On their way to a nearby village, Kyoshiro and Yuya run into Okuni, a former acquaintance of Kyoshiro's whom he does not remember. Okuni explains her past with Kyoshiro and Demon Eyes Kyo and how she longs to see Kyo. They arrive at the village the next day but Okuni has apparently disappeared. Kyoshiro and Yuya appear to have a warm welcome, but there are shady characters lurking about. 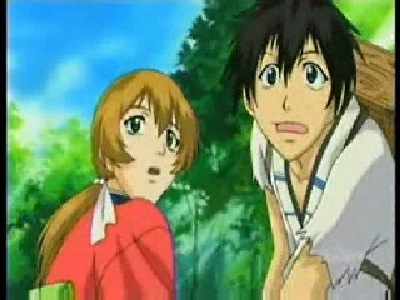 It turns out that the samurai village is being terrorized by a gang of hired assassins. One of them challenges Kyoshiro, thinking he is Demon Eyes Kyo. Benitora, another one of the gang changes sides to save him. Shirogarasu, the last remaining assassin, comes to challenge both Kyoshiro and Benitora. This new opponent is too strong, and Kyoshiro is forced to call upon the Demon Eyes Kyo's power. The warlike Kyo has now completely taken over Kyoshiro's body.He meets the charismatic samurai Yukimura Sanada at an in,and they are later attacked by a mysterious ninja girl, Mahiro. 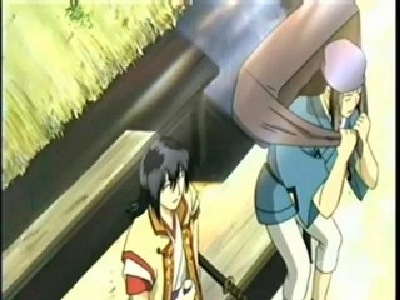 Tears of an Assassin

Mahiro accuses Kyo for killing her sister, and attempts to take her revenge. During the battle, the truth of what happened is revealed and Kyo saves Mahiro from their common enemy. The Duel at Hibiya Bay

Yukimura convinces Kyo to enroll in the Shogun's tournament, where all the greatest fighters in japan are gathering. Kyo meets Migeira, a strange man from Europe who explains that Kyo's sword, a Muramasa blade, has special powers. 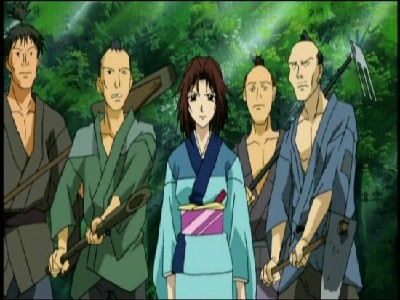 It all changes during the shogun's tournament when Lord Tokugawa attacks Kyo. We find out that the lord is a being controlled by one of Nobunaga's henchmen. 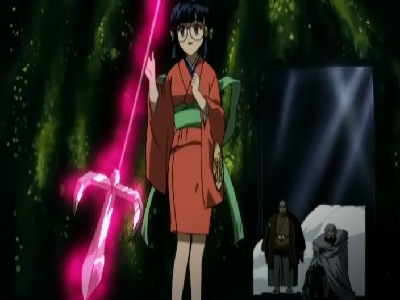 The gang follows Lord Tokugawa under the castle and Benitora discovers a Murimasa, but can he lean to wield it in time to save his friends? A Blind of Smiles Samurai Deeper Kyo is a rather obscure (thank God) shounen anime from Studio Deen based of a long running manga which is apparently a lot better but I have not read it. Now that we have that out of the way, what did I think of it? It SUCKED! I really forced myself through it and actually considered dropping it. Why did I dislike this anime? Well, that's the purpose of this review. The story for this anime starts off rather solid albeit a bit cliched. With it's fugitive goofball setup it felt reminiscent of Kenshin and Trigun. I was actually rather enjoying watching the humorous character interactions and fun setup. Then about halfway through, something happened. The show decided to stop being fun and started being repetitive. And when I say repetitive, I mean REPETITIVE. I mean seriously, when the lead character is about to reach his objective after fighting through several of the antagonist's lackeys, the writer slaps the viewer in the face and makes the antagonist move the objective to another destination, causing the lead character to have to go through the same bloody process as before. This happens roughly 3 times throughout the entire 26 episode show. It's just our protagonist fighting off supernatural henchmen to reach his goal over and over again. And when he battles against a powerful enemy he just uses his plot armor, I mean, special attack to defeat them in one blow after all else fails. We also see the same bloody stock footage for said attack used every time it happens. Fortunately this is accompanied by a badass guitar riff which I rather liked. Then after the show stops being repetitive it decides to get downright frustrating by throwing in all this exposition at you at once to the point where it becomes information overload. And don't get me started on the ending. I'm not going to spoil anything, but I'm just going to say it is possibly the most ridiculous conclusion to any anime I have witnessed. As for the characters, they were all pretty bland. They were often just archetypes prevalent in the shounen genre. We do get the backgrounds of some of the characters but little to no development. Finally I shall say something good about this show. The artwork was pretty impressive. However the same cannot be said about the animation. It is very limited and amusingly quaint. Watching a long distance shot of a character running is one of the most unintentionally amusing things I have ever seen. As for the soundtrack it was actually very good. The aforementioned badass guitar riffs really stand out and the opening is actually amazing. Seriously, go look it up. The best analogy I can come up with for my enjoyment of the show is that it's a tire rolling downhill. Starts off pretty high but gets lower and lower until it reaches the bottom. I would not recommend it.

Start a new discussion for Samurai Deeper Kyou anime. Please be fair to others, for the full rules do refer to the Discussion Rules page.