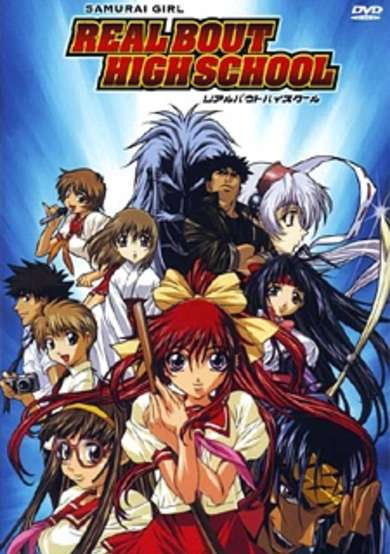 At Daimon High School, kids settle their disputes by dueling with each other in the school's official K-Fight battle arena. Ryoko Mitsurugi, samurai girl and undefeated K-Fight champion, is called upon by a mysterious Priestess to protect the Earth from an invasion coming from the alternate universe of Solvania. She must face battles that will test her skills, her friendships, and her heart in order to find her true strength as a samurai warrior. (Source: ANN)

As Ryoko Mitsurugi goes to Daimon High School, she gets confronted by a group of ninjas and fends them off easily in a K-Fight, an officially sanctioned duel to settle disputes between folks at the school. Later on, when she prepares for a tournament where the winning club gets 100 times their usual funding, Ryoko finds a pendant necklace in a locker and puts it on. She faces her rival kendo senpai Azumi Kiribayashi in a duel but strange things begin to happen soon afterwards.

The Strongest Man On Earth Joins the Fight

Ryoko is transported to another dimension where she has to fight a dragon. In the alternate world her martial arts skills are greatly enhanced, and her wooden kotetsu becomes a sharp blade of destruction. When she returns back to the regular world she wonders if it was all a dream. Meanwhile Shizuma prepares for his comeback to the school and during his first fight back, the school receives a surprise visit from a champion fighter.

Enter the Way of the Swordsman

After the recent fight with Nagumo and Shizuma, Ryoko tries to figure out how Nagumo knows about the alternate world, and Ryoko visits the Hiten Shrine where she meets Miyuki and the old master. A subsequent visit thanks to Azumi inspires her to strive to become the master’s apprentice, and she will stop at nothing to achieve that goal. Meanwhile a woman and her goons pay a visit to the Hiten Shrine to find Nagumo as well.

The Girl With Deep Black Eyes

Thanks to her persistence and the master’s generosity, Ryoko begins training at Hiten Shrine. She also learns that Miyuki is turning 14 years old so she plans out a birthday celebration. Shizuma continues to look for Nagumo for a rematch, but somehow he and Ryoko both end up transported to the alternate world where they have to fight a demon beast.

Attack of the Raging Wind!

Ryoko is recruited into cosplaying a magical girl for a restaurant demonstration at a shopping mall. Hitomi warns her that a visitor from afar will bring trouble. Meanwhile, a trio of fighters search for Shizuma with their leader Akitaka hoping to pick a fight with him, and they end up finding him in the same mall as Ryoko.

Threat From Another World

Ryoko and Shizuma have to battle some large crabs at the Daimon Outlet Mall alternate world, but this time around, their friends and rivals are taken along for the ride. They also learn about the nature of Akitaka's boss.

Lunch time is typically a madhouse for many of the students at Daimon High. Ryoko avoids getting involved, that is, until Azumi Kiribayashi challenges her to a K-fight cooking battle where the winner gets to bring a lunch to Tatsuya-senpai!

The Beach, the Swimsuit, and the Haunted Island

Azumi’s kendo trip with Tatsuya to her family’s private beach ends up being a full fledged party as Ryoko, Shizuma, their friends and family, and even their teachers, come along. Nearby on an island, the Yonshinkan are plotting some major schemes to take over the world as Setsura ponders his group's decreasing role.

Ryoko is called again by her fans to continue participating as the magical girl Magical Waitress Oyster Lulu. Trying to curb everyone’s enthusiasm, Ryoko is taken by a little girl who wants to reunite with her older brother, who is the son of the president of a large corporation. Ryoko and the gang try to meet with the boy but he won’t give him the time of day, and the vice president has other schemes to take over the corporation. But Ryoko won’t give up.

The Awakening of Love

The school festival nears as Azumi and Tatsuya work hard on their lines and their roles in the play. But Ryoko realizes that the director of the drama club, Shiori Goto, has taken a strong passion to making sure they get their lines right, especially for Tatsuya. When Ryoko finds out Shiori and Tatsuya have been friends since childhood, she must think about her purpose in life. Then Shizuma gets on Ryoko’s nerves and initiates a K-Fight with her.

Anyone who is reasonably familiar with Neo Geo's classic fighting game franchise "Real Bout Fatal Fury" will probably be confused as I was upon stumbling across "Samurai Girl Real Bout High School". I'd wondered whether the series is some spinoff from the games, and the opening scenes did little to dispell that suspicion - it features a hand to hand combat between two fighters, one of whom resembles Wolfgang Krauser, a boss from the video games (in fact he resembles the video game character more than the actual Wolfgang Krauser in the anime "Fatal Fury 2: The New Battle"). However, soon it became clear that "Samurai Girl Real Bout High School" had no real connection with "Real Bout Fatal Fury", though I guess it's possible the games did provide some inspirations for it. Even though I was a little disappointed to find that the anime series and the games are unrelated, I have to say that I did not expect to like this as much as I did."Samurai Girl Real Bout High School" is a strange anime: a mixture of action, comedy, school drama, with an intruding touch of fantasy. It's this touch of fantasy that makes the whole thing strange, and without it, I think I would have liked the series quite a bit more.My initial impressions of "Samurai Girl Real Bout High School" is pretty much inline with my expectations - it seemed to scream mediocrity in all departments. The idea of using "K-Fights" in a school to settle disputes is a poor excuse for fighting, one that almost matches the absurdity of another fighting/martial arts anime "Variable Geo" (which, by the way, is about a tournament to determine "who is the toughest waitress in the world"...). Other elements that I dislike in anime such as the whacky comedy and the panty shots are also omnipresent. But there was one bright spark that seemed to promise to redeem the anime, and that's the first proper K-Fight (proper as in not one of those fights where some cannon fodder gets annihilated within like 2 seconds) that happened in the second half of the first episode. It comprises some breathtaking action sequences the quality of which I honestly did not expect from this kind of show, and it became my first highlight of the series.Alas, it turns out that K-Fight is the best fight in the whole series by some distance, as later battles never lived up to the expectation set by it. Most of the later fights involve battling monsters, and those are pretty boring if I'm being honest. I was more interested in the side of the comedy/school drama that was being unfolded. At the time of watching, I'd already gone through 100+ anime titles, and I suspect my brain had finally succumbed to typical anime humour and was beginning to accept it. As the action got less and less entertaining, I found to my surprise that the comedy of this series was beginning to entertain me more and more. Also, the development of the non-supernatural part of the story, shallow though they may be, was beginning to rouse a casual interest in me.Episode 10 brought an astonishing change of mood - in a single episode, the series manages to introduce a new dimension of romantic drama that was not present before. Prior to this, the "romance" is mostly there as a source of comedy (like the silly K-Fight over lunch), but episode 10 turned it into a much more serious affair . It shouldn't have worked, but for me it did, and in fact I liked it so much it's my second highlight of "Samurai Girl Real Bout High School". It also turned out to be the last highlight. After episode 10 brought "Samurai Girl Real Bout High School" to an all series high, episode 11 promptly dragged it down to an all series low. It's an episode that comprises a measely amount of new footage and about fifteen minutes of pointless flashbacks. Things don't improve after that either, as the remainder of the series goes on to finish the demon story (badly) and that was that.I do see the story as the weakest aspect of "Samurai Girl Real Bout High School". I know I said earlier that certain aspects of the story triggered my interest slightly, but as I'm sitting here writing this, try as I might, I cannot remember what the supposedly interesting bits I was referring to were. The only strong impression I'm left with when I think back on the story is that awful demon slaying fantasy. It comes out of no where, doesn't integrate well with the the school aspect of the anime, and is badly explained to boot. As a matter of fact, they hardly explain it at all. Towards the end, I noticed that this is made by Gonzo, which goes a long way towards explaining the mashed up, half-arsed story, as it's one of the trademarks of their works.I guess it must have been the characters that kept me interested. I genuinely found them likeable even if they are mostly quite shallow. I have to say voice actors did a great job of bringing them to life, particularly the protagonist Ryoko, whose voice has an audible "wild streak" in it.So, expect comedy, expect fanservice, expect action that can be brilliant AND boring, expect a half assed, incomplete fantasy story and, if you don't expect too much in terms of quality, then maybe, just maybe, the show will spring a couple of pleasant surprises on you as it did for me.

Start a new discussion for Samurai Girl Real Bout High School anime. Please be fair to others, for the full rules do refer to the Discussion Rules page.