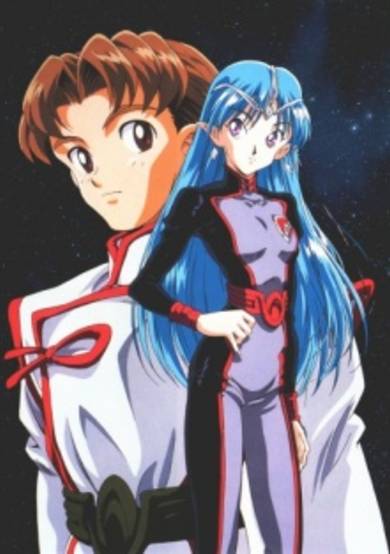 Based on a science fiction novel series, Crest of the Stars (Seikai no Monsho) is the first installment in this sci-fi saga. The story follows Jinto, whose world was taken over by the largest empire in the galaxy: the Abh. Jinto's father, the planet's prime minister, handed their world over to the Abh in exchange for a standing in the Abh Empire. As a result, Jinto became a prince and was shipped off for an Abh Education. There he meets a princess of the Abh Empire, Lafiel, whom he quickly befriends despite her cold exterior. The Abh Empire is plunged into war soon after and the story continues from there... (Source: ANN)
User Count4712
Favorites Count40
Start Date3rd Jan 1999
Next ReleaseInvalid date
Popularity Rank2125
Rating Rank1367
Age RatingPG
Age Rating GuideTeens 13 or older
SubtypeTV
Statusfinished

All Seikai no Monshou released episodes

Kin of the Stars

It has been seven years since the alien invasion of his home planet of Martine, and Jinto Lin is now on Delktoe, where he has just completed his education at an Abh school and is awaiting his next assignment, military training in the empire's capital. A deal struck by his president father left the elder Lin in charge of Martine and Jinto an Abh prince. The burden of royalty is an uneasy one for Jinto, who is unaccustomed to the stares his Abh uniform attracts. His friends also find it difficult dealing with nobility. Just one, Dorin Ku, shows up to see him off at the spaceport. Before walking away, Ku leaves Jinto with a gift, a baseball signed by all of his absent friends. The ball comes in handy a short while later when a young thief steals a traveler's luggage, but it's not because of Jinto's less-than-impeccable aim. Rather, it's Lafiel, his beautiful Abh escort, who stops the crime. But she's greeted with hatred despite her good deed. Is this the type of life awaiting Jinto? If so

Jinto Lin has finally met his first Abh, and perhaps the only thing more noticeable than Lafiel's beauty is her piloting skills. Jinto, on the other hand, is in for a rocky military career if this first flight is any indication. Even less uncomfortable than the trip to the vessel that will transport him to the Abh capital is the reception that awaits him once on board. Jinto is obviously unaccustomed to the fanfare that greets him, and is thrown for a loop when he learns Lafiel's true identity. He's not quite sure how to handle himself around a princess, which temporarily complicates the budding friendship. Friendship, however, may not be the only thing on Jinto's mind, as they quickly settle their differences and end up in his room discussing where Abh babies come from! Any possibility for a future romance will be put on hold indefinitely, though, by the long war that's about to begin.

Despite the Humankind Empire Abh's dominance over the universe, not everyone is under its control. Four groups still remain free, and they've put aside the past differences between them by signing a treaty, the primary goal of which is to combat their common sworn enemy. Unfortunately for Jinto Lin, one of the four independent nations, the United Mankind, has chosen this particular time to take aggressive action. His military career cannot start before his training does, however, and he is ordered off the ship as a noncombatant. It is up to Lafiel to transport him to safety and warn the empire of the impending attack. The two manage to escape from the Abh ship before the United Mankind forces arrive, but what will become of the crew they've left behind to face seemingly insurmountable odds?

While on their way to the Abh capital to bring Jinto Lin to his military training, the captain and crew of the patrol ship Gosroth detect the presence of warships that they suspect belong to the United Mankind, an enemy opposed to Abh control of the universe. Jinto and Lafiel, as noncombatants, are ordered off the Gosroth by Captain Lexshue, but not before the Abh princess is severely reprimanded for questioning those instructions. Lafiel would rather stay and fight, but Lexshue -- realizing the future importance of her stubborn protegee -- will hear nothing of it. The mood aboard Jinto and Lafiel's escape vessel is a somber one, as she laments her uselessness to the mission. Jinto does his best to cheer her up, but his efforts are futile. Still, Lafiel is better off exactly where she is, as the Gosroth, after attempting to escape, is finally caught by the United Mankind forces. Will they manage to escape? Lafiel certainly hopes so, because she has a unique relationship with the ship's

With the Gosroth destroyed, the United Mankind is free to continue its path toward the planet of Sufugnoff. The Abhs did, however, fight ferociously until the end, letting Jinto and Lafiel gain a large lead over the enemy fleet in the race toward Abh territory. Little do they know, but that lead will shrink significantly thanks to what was originally intended to be a very short layover for refueling in the Baron Febdash territory. Lafiel is quite uncomfortable with the excessive attention she receives from the baron's scantily clad vassals -- as well as with the lack of respect given to Jinto -- and seeks to leave immediately. Right on cue, Baron Febdash appears on a video screen, apologizing to Lafiel that his space station lacks the fuel her ship requires. Furthermore, he informs her that the vessel is in need of repair. Doubting the truthfulness of both statements, Lafiel is left wondering why Febdash seems to be trying to prevent Jinto and her from leaving. The intrigue only deepen

Less-than-stimulating dinner conversation with Baron Febdash -- particularly the part where he expresses his hatred for land people -- results in Lafiel losing her appetite, and she leaves her rude host to eat in solitude. For Lafiel, it's too much of a coincidence that Jinto -- a land person -- was absent from dinner, and she tries to contact him after retreating to her room. His communicator is suspiciously unavailable, however, and subsequent efforts to reach him using Febdash's onboard computers are also futile. However, she does learn a valuable piece of information: The baron's vassals are the key to finding her companion. Baron Febdash wasn't being untruthful when he told Lafiel over dinner that his father was entertaining Jinto, but he failed to mention that he kept his father confined, and that Jinto was his prisoner now as well. Why would he risk the wrath of the Abh Empire by interfering with a vital mission undertaken by one of its princesses? Lafiel isn't quite sure, but s

The Style of the Abh

With all access to Jinto -- imprisoned by Baron Febdash -- cut off, a desperate and now-armed Lafiel is left with only one option: storm the space station's housekeeping control center. The baron quickly closes in after learning of her actions but leaves almost immediately in a huff because one of his servants has joined forces with Lafiel and has had the nerve to speak out against him. Now left questioning the loyalty of all his vassals, Febdash is further incensed by a message that suddenly goes out over the intercom and by his inability to interrupt it. It explains that his actions have jeopardized the princess's mission, and that Lafiel's royal family will hire anyone wishing to aid her cause. The baron still has one trick up his sleeve, however, one that will ensure Lafiel will never be able to complete the task given to her aboard the Gosroth. In response, she decides to destroy Baron Febdash, although her vessel has no weapons. As an Abh, Lafiel would rather fight than surrender

Despite odds stacked heavily against her, Lafiel -- relatively inexperienced as both pilot and soldier -- emerges victorious in her battle with the baron. That doesn't mean that Jinto and the princess haven't also suffered a loss, however. The delay caused by their imprisonment has allowed the United Mankind to beat them to the planet of Sufugnoff, and the invasion they could have possibly prevented is already under way by the time they arrive. The enemy has also detected their presence and launches an attack, but Lafiel again displays some deft maneuvering and they are able to elude death once more. Though they've managed to survive the initial confrontation, Jinto and Lafiel's options are limited because the orbiting tower where they would have docked has been destroyed. With nowhere else to go, they turn their attention toward Sufugnoff's surface, but the ship in which they are traveling may not be equipped for the landing. Worse still, Lafiel -- despite all of her training -- has n

Escape: Just the Two of Us

Though their landing was a bumpy one, Jinto and Lafiel successfully reach Sufugnoff after barely escaping the United Mankind forces that have invaded the planet. Unfortunately, starving in the fields isn't a much better fate than being shot down in space, and they must eventually make their way to the city if they hope to survive. But Lafiel -- with her blue hair and elflike ears -- will have a hard time going unnoticed in the enemy-occupied city, meaning that Jinto will have to go it alone. After a trip to the pawnbroker, he returns to the cave in which Lafiel is hiding with food and clothing -- and black hair dye. Though taking great offense to the last item, she finally gives in, but their disguises do little to prevent them from being attacked by three troublemaking teens while on the road to the city. They are of course no match for Lafiel's military training, but soundly thrashing the teens -- and taking their vehicle in the process -- only leads to the United Mankind resuming th

I'll be honest I am not much of a fan when it comes to older anime but i have to say I have really enjoyed this series. If anyone enjoys the genre's this anime is listed in they should totally watch this anime, I'm sure they will enjoy it like I did. Along with the enjoyment I got from watching it I believe it has really good character development as well.

Start a new discussion for Seikai no Monshou anime. Please be fair to others, for the full rules do refer to the Discussion Rules page.