The world has become a slaughtering ground for the Crimson Denizens, mysterious beings from a parallel universe who thrive on the life energy of humans. These merciless murderers only leave behind scant remainders of souls called "Torches," which are mere residues that will eventually be destroyed, along with the very fact of the victims' existence from the minds of the living. In an ambitious endeavor to put an end to this invisible, hungry massacre, warriors called Flame Hazes relentlessly fight these monsters. One fateful day, Yuuji Sakai ceases to be a regular high schooler—he becomes trapped in a crevice of time and is suddenly attacked by a Denizen. Coming to his rescue just in the nick of time is a nameless hunter who seems no different from an ordinary young girl except for her blazing eyes and burning crimson hair. However, before Yuuji can learn anything more about his situation, he discovers that he has already been reduced to a Torch—merely a scrap of memory waiting to be extinguished. [Written by MAL Rewrite]

All Shakugan no Shana released episodes 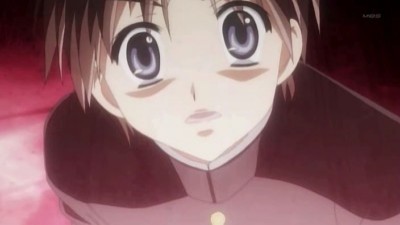 The End to Everything, the One Beginning

It was a normal day of the life of Sakai Yuuji. When all of the sudden his life changed. When a Monster called "Tomogara" attack him and everyone around him. He was they confused and shocked because everyone around him was turned into a blue flame and being consumed by the monster. Yuuji's life was then saved by a girl in a black coat, with Burning Eyes (Also Known as Shakugan) and a flaming red hair holding a long sword. Due to the confusion and chaotic mess, yuuji got into. He follows the girl with flaming red hair and finds out the truth about everything around him. 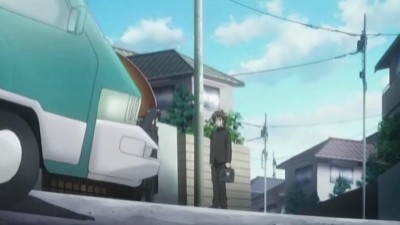 The girl with flaming hair uncovers the truth about the world that Yuuji is living in. He learns that he is already dead, and is only lasting until his flame burns out. As he watch his classmate's flame about to burn out, Yuuji felt useless for doing nothing and wants to help. He tries his best in making an effort of giving her a good time before she leaves... 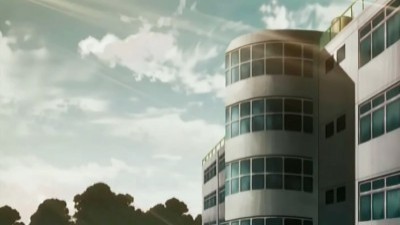 The Torch and The Flame Haze

Yuuji gave the "Flaming-hair" girl a name, and that name is "Shana". The next day, Yuuji went to school looking all depressed. He heard his friend talked about the girl that disappear yesterday and became excited because his friend remembers her. Everything changed when the classroom was attack by a Tomogara. Suddenly, Shana came out of nowhere. In order to save the people around him, he must sacrifice some of his torch power to turn everything back to normal. But will Yuuji do so? 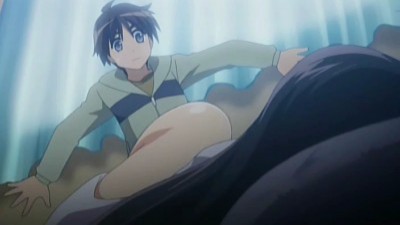 Yuuji and Shana seem to be getting along well and she unexpectedly sleeps over, in his room. The problem is that Shana starts to feel differently about this Torch (Yuuji) than any other, could she be developing feelings for him? Meanwhile, another Flame Haze arrives in the city. What is this person's motive? 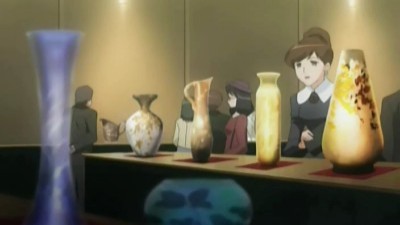 Shana manages to return all beat-up from her previous battle with Margery Daw, and she's way too angry to receive help from the concerned Yuuji. Because there's nothing he can do, Yuuji goes to school, only to be greeted by a girl, Kazumi who asks him out on a date. However, on their date, Yuuji runs into a mysterious man who's been erasing Torches. 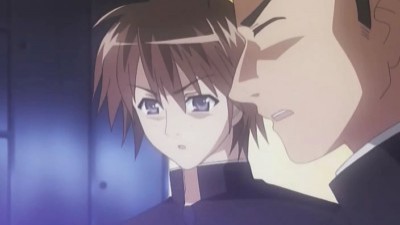 Shana has come to the conclusion that Yuuji is restricting her role as a Flame Haze and is forced to make terrible decisions. Just when she is about to carry out her decision, Friagne begins to make his move on his City-Devouring plans. Can he be stopped in time? 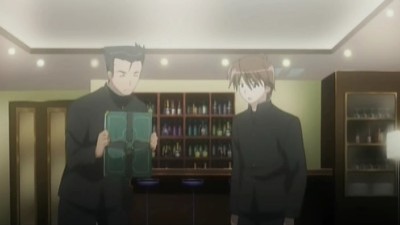 Margery Daw and Marchosias continue to search for Rammie, with Shana and Yuuji right behind them. As they continue to chase Margery, Shana and Yuuji hope to give Rammie a chance to get out of Misaki and to allow him to travel some place farther. Yuuji also wants to fight alongside with Shana. With that, Shana begins to train him for future battles. 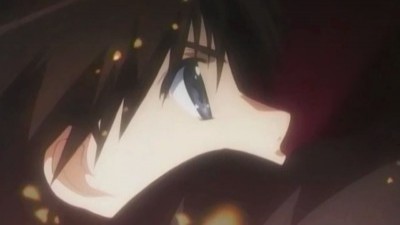 The battle between Margery Daw and Shana has finally begun while the fate of the entire city rests in the balance. What can Yuuji do to help Shana victor the battle? 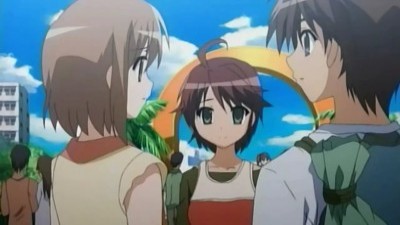 The Poolside of Love and Desire

Due to it being so hot outside, Hayato Ike hands out tickets to a water park and ultimately it's decided that Yuuji and his friends go there after school. Once there, Margery Daw unexpectedly shows up, though Shana can't sense any intent to kill. 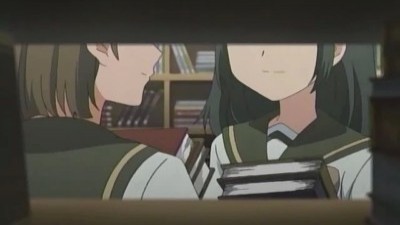 Yuuji's training is not going so well so Shana wants to increase the level by creating a Fuzetsu one day after school. However, school business with the student council doesn't allow him to do this, so Shana gets angry at him. Also, another Rinne appears.

Story - Meet Yuuji, he's your average student. Meet Shana, she's your not so average Flame Haze. Yuuji learns about the real world that surrounds him -- its not all it appears to be. As flame denizens and hazes come to the city, battling for existence.. oh, just watch it and find out for yourself. I'm not going to go through this. It's a solid story and I had no complaints, a few plotholes but nothing very disasterous to knock this down any further.Art/Animation -The animation is very nice and has an very beautiful feel to it. The animation, done by J.C. Staff, appears to be using somesort of gradient animation, which is new and rare. It's a beautiful series. The animation is fluid. The 3DCG that appears every so often, is a nice touch and it works for it. The OP/ED sequences are nice as well.Sound - Mami Kawada sings the first OP song, which I have to say, is probably my favorite, but KOTOKO sings the second OP song, which is, in my opinion, infinitely better than the first OP. The inbetween music is proper and put in the correct places, it also sets a strong tone of tension or a strong tone of lighthearted feel.Character -I'd say my favorite character is well, the title character, Shana. Well, actually, I'd say I liked all the characters, well, except for Kazumi Yoshida(per why the 9 grade). The love relationships, triangles and such are fun to watch. The interaction of all the characters is nice and easy to understand, I guess.Enjoyment -I enjoyed every minute of the series. It was exciting, comedic and full of action. I'm glad they have a second season, because 1 season just won't do it - no sir, it won't. It's nice, because, it's one of the most enjoyable experiences in my anime fandom yet. Overall, I believe a 9/10 is appropriate for a series such as this.

Shakugan no Shana is a series that I had long been meaning to watch after being impressed with the battle music and visuals I saw in a video highlighting anime background music some time ago. Now that I'm finally done with the first season, I can say that it is a very fun and enjoyable show. It didn't blow me away by any means, but I think it's a very solid series. If I had to pick my favorite aspect of the series, it would have to be the various supernatural/fantasy elements and characters, especially during the battle scenes. The characters range from amusing and funny to disturbing, and by disturbing I mean that brother/sister Denizen duo. The story isn't very deep, but still good enough to keep the show interesting and enjoyable. Now earlier when I said that I was impressed with the visuals I saw, I was specifically referring to Shana during what I would call her Flame Haze mode, which I thought looked cool. From a technical standpoint, the visuals aren't anything impressive, but they get the job done. Overall, I would rate this an 8/10 for "Very Good", which gets a high recommendation from me. If you're looking for the next epic masterpiece, this might not be it. However, it's a solid fantasy series with some cool characters, great battles, cute romance, and even some nice comedy. If you haven't seen Shakugan no Shana yet, you ought to at least check it out sometime.

**Random Info** <strong>Studio: </strong>J.C.Staff <strong>Director: </strong>Takashi Watanabe <strong>Writer: </strong>Yasuko Kobayashi <strong>Music: </strong>Kow Otani <strong>Length: </strong>3 Seasons (24 episodes each) **Story** A high school student by the name of Yuji Sakai meets a girl with flaming red hair and eyes who says she is a Flame Haze. she explains to him that he is a Torch ( someone who died, but a little "power of existence" creates a form of them that will slowly fade away from existence and no one will ever remember them.) she also explains that she is a flame haze (a person who must fight to keep the balance of the world) and has to fight denizens ( a person/thing that eats power of existence and disrupts the worlds balance). these 2 soon become friends and have to fight together to keep the balance of the world. overall, the story was fairly good but there were parts where i found it a bit hard to fallow and some that i found frustrating because they dragged on certain things that could have easily be solved a lot sooner, but maybe that is just me. i give story a solid 7. **Animation** Not much for me to really say here. the animation was quite good, with very few flaws. i give it a 8. **Sound** The sound in this show is AMAZING! especially the openings, my favorite being Light My Fire. the soundtrack is one of my personal favorites. i cant say anything about a dub, for i watched it subbed. sound gets a perfect 10 from me. <strong>Characters <br /></strong> The characters in this show were fairly good. i found most to be likable, though sometimes i didn't always agree with their actions. yes, the lead female protagonist is an average tsudere but she still wasn't a bad character. characters gets a 7. **Conclusion** overall, the show was really enjoyable, even though it is very time consuming and i'm not a huge fan of long running series. it scored above average in all categories and i will recommend that you watch it if you haven't already. Final Score: 8.2

Start a new discussion for Shakugan no Shana anime. Please be fair to others, for the full rules do refer to the Discussion Rules page.